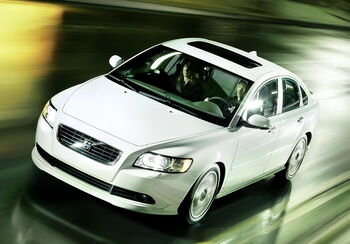 The S40 sedan (and V40 and V50 station wagons) is a compact car sold by Volvo Cars. There have been two distinctly different models of the cars, the first launched in 1995, and the second completely-new model in 2004.

The 2007 S40 comes in two trims, the 2.4i and the T5. The 2.4i is powered by a 2.4L 168hp 5-cylinder engine and the T5 houses a 2.5L 218hp 5-cylinder. In addition, while the 2.4i is only available in front wheel drive, the T5 comes in either a front wheel drive or all wheel drive version. A 5-speed manual transmission is standard on the 2.4i, with the option for a 5-speed Geartronic automatic, and the T5 comes with a 6-speed manual for its FWD version and the same 5-speed Geartronic auto for its AWD version. Some of the standout features for these trims include:

Today's actual prices for the Volvo S40 can be found at CarsDirect.

The current generation of S40 only debuted in 2005, so accurate long-term reliability information is not yet available. However, the last model in the previous generation, the 2004 S40, was given an overall Green rating from Automotive Information Systems, indicating minimal problems with the vehicle.

Some of the standard safety equipment that can be found on the S40 includes:

A full list of the S40's colors is viewable at CarsDirect.com. Some of the available combinations are:

There are currently no hybrid models of the S40 in production.

According to Kelley Blue Book, "although the new S40 is projected to hold its value better than the previous generation, it still trails the Subaru Impreza, Acura TSX and Audi A4 2.0 in expected 24-, 36- and 48-month residual values."

Introduced in the middle of the 2004 model year, the second generation S40 introduced a new design based on the Volvo P1 platform built at the Volvo Cars factory in Ghent, Belgium. At the same time, the V40 was replaced by the V50 wagon, also based on the Volvo P1 platform and built in Ghent. The S40 was nominated for the World Car of the Year award for 2005 and won the Canadian Car of the Year Best New Sport Compact award for 2005. It has also been elected the South African Car of the Year for 2005 by the South African Guild of Motoring Jounalists.

The S40's dimensions are as follows:

The S40 T5 (one of the several variants of the S40) features a 2.5 L (2521 cc) five-cylinder fuel injected engine with a light-pressure turbocharger. The valvetrain has four valves per cylinder and is a DOHC design. The engine is transversely mounted at the front of the vehicle and drives the front wheels.

The 1995 S40 sedan and V40 wagon were built in the Netherlands at the NedCar factory, a pre-Ford joint venture between Volvo and Mitsubishi Motors. It was based on common platform with Mitsubishi Carisma but did not sell as well. Despite the shared platform, they were not the same car: of the 5,000 parts on the cars, 4,000 were unique to each. Of the remainder, 650 were produced by Volvo and 350 by Mitsubishi. Volvo's traditional emphasis for safety and ergonomics were thus easily identifiable in these models too.

In 2000 the 40 Series went through a facelift, and a number of technical improvements were simultaneosly introduced, such as increasing the size of brake discs, upgrading some suspension components and slight widening of the track width. These new specification 40 Series Volvos are often referred to as "Phase II" models.

The 40 Series cars were equipped with a 1.9 L diesel or 1.6 L, 1.8 L or 2.0 L fuel-injected gasoline engines, not forgetting the sporty low (2.0T) and high (T4) pressure turbo variants on top of the motor range. The 1.9T was the only engine available in the United States.