The Volkswagen Touareg is a luxury 4x4 (US: SUV) automobile manufactured by Volkswagen. It is the first of this class ever produced by this manufacturer.

The Touareg was co-developed with Porsche, who was also looking to add an SUV to their lineup, as a cost-sharing initiative. Porsche shares this chassis to underpin their Cayenne SUV, although there are numerous styling, equipment and technical differences between the two vehicles. Also, the Touareg replaced the Volkswagen Eurovan for North America as the company's truck.

The following engines are available:

Some of the safety features found standard on all trims include:

Colors will vary by trim, and a complete list is viewable at CarsDirect.com.

Volkswagen employees had set out an experiment to see if the Touareg V10 can tow a 155 ton Boeing 747. Set in an airfield outside London, the necessary modification to the car is an extra 4300 kgs added to ensure the power from the engine to be translated into propelling force. The Touareg managed to tow the Boeing 150 metres without any stress to all of the car's components.

Despite the misconception that the Touareg and Cayenne are "soft-roaders" with little or no off-road ability, Porsche/Volkswagen jointly did extensive off-road testing with test mules and both vehicles are in actuality extremely capable off-road, all that is really necessary are more aggressive tires. Volkswagen, for instance, entered a modified Touareg in the Paris Dakar.

Both Touareg and Cayenne come standard with four wheel drive, a manually lockable center differential and a "low range" setting that can be activated with in-cabin controls. Options to make the vehicles more capable off-road include an available air suspension system which can raise the car's ride height on command and an interior switch allowing the rear differential to be manually locked along with the center unit. At maximum ride height, the air suspension system gives 10.7 in of ground clearance.

The Touareg name is derived from the French moniker for the nomadic Tuareg tribe. The name of the vehicle is frequently mispronounced; the proper pronunciation is TWAH-reg. Ironically it is a word that Germans find difficult to pronounce, finding it eas ier to say "Tour-egg". 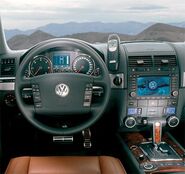 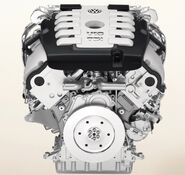 The Touareg has become controversial in Australia. Former Australian Rugby Union captain, Phil Kearns was provided with a V8-powered Touareg as an ambassador for the vehicle. On October 22, 2005 an incident occurred in the driveway of the Kearns' family home whereby the 19-month old daughter of Kearns was struck by the vehicle in forward motion not reverse, leaving her with very serious injuries. Road safety advocates in Australia have pointed to the poor visibility from the drivers' seat of the Touareg, and of SUVs generally, as the cause of the accident. An Australian National Roads and Motorists Association (NRMA) study has revealed that a child needs to be 7.8 metres from the rear bumper of the vehicle in order to be observed by the driver. This fact has led to calls for reversing cameras to be made compulsory on all SUVs sold in Australia.

The V10 diesel version of the Touareg was named "meanest" or least-energy-efficient 2004 car by the American Council for an Energy Efficient Economy (ACEEE) for its fuel economy of 17 miles per US gallon city (7.3 km/L) and 23 mpg highway (9.8 km/L). This, along with the Touareg's emissions and their estimated impact on global warming and health, earned it the low "Green Score" of 9, as compared to the Honda Civic GX, which was the "greenest", at a score of 57. Within the context of the US SUV's that are significantly less efficient (e.g. Hummer) this accolade is not so damning.

Interestingly enough, diesel is the ecological option used around the world. In Europe, where ecology has a strong effect on politics, over 50% of the cars are diesel. The coalition government of the German Green Party and the SPD Social Democratic Party of Germany introduced highly restrictive environmental policies, that increased the use of diesel and biodiesel vehicles. Diesel engines are, on average, 40% more efficient than gasoline engines (spark-ignition engines). The increased fuel economy of the diesel over the petrol engine means that the diesel produces less carbon dioxide (CO2) per unit distance. Recently, advances in production and changes in the political climate have increased the availability and awareness of biodiesel, an alternative to petroleum-derived diesel fuel with a much lower net-sum emission of CO2, due to the absorption of CO2 by plants used to produce the fuel.

The Touareg was a joint project developed by Porsche and Volkswagen, initially called E1. The goal was to create an off-road vehicle that could handle as a sports car. The team, with over 300 people, was lead by Klaus-Gerhard Wolpert and was based in Weissach im Tal, Germany. The Volkswagen Touareg is built in Bratislava, Slovakia. The manufacturing plant shares production with Touareg-cousins Porsche Cayenne and Audi Q7. Due to the demand, and the exchange rates of Euro vs. Dollar, as well as different pricing and environmental policies in the USA, only V6 and V8 are available for the North American market. A very limited number of the 2004 V10 diesel engine units were sent and are currently highly priced, even on the used market.