The Volkswagen Type 1, more commonly known as the Beetle Bug, is an economy car produced by the German auto maker Volkswagen from 1938 until 2003. Although the names "Beetle" and "Bug" were quickly adopted by the public, it was not until August of 1967 that VW itself began using the name Beetle in marketing materials in the US.

In Britain, VW never used the name Beetle officially. It had only been known only as either the "Type I" or as the 1100 (eleven-hundred), 1200 (twelve-hundred), 1300 (thirteen-hundred) or 1500 (fifteen-hundred), which had been the names under which the vehicle was marketed in Europe; the numbers denoted the vehicle's engine size in cubic centimetres. In 1998, many years after the original model had been dropped from the lineup in most of the world (production continued in Mexico until 2003), VW introduced the "New Beetle" (built on a Volkswagen Golf Mk4 platform) which bore a cosmetic resemblance to the original.

Its peculiar styling, underpowered motor, rough ride, and high noise levels compared to modern vehicles might have made it a market failure. In its day, though, it was more comfortable and powerful than most European small cars, and ultimately the longest-running and most-produced automobile of a single design (a record that will not take long to be beaten by its younger "cousin" the Type-2 Bus or Kombi, which is still in production in Brazil, with the same basic characteristics of the first series). It remained a top seller in the US, even as rear-wheel drive conventional subcompacts were refined, and eventually replaced by front-wheel drive models. The Beetle car was the benchmark for both generations of American compact cars such as the Chevrolet Corvair, and subcompact cars such as the Ford Pinto and Chevrolet Vega. In the international poll for the award of the world's most influential car of the twentieth century the Beetle came fourth after the Ford Model T, the Mini, and the Citroën DS. 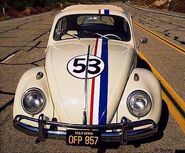 In 1950, Volkswagen Beetles started arriving into Dublin packed in crates in what was termed "Completely Knocked Down" form ready to be assembled although Volkswagen involvement in Ireland started 1 year earlier.

The first Volkswagen Beetle dealer in the UK was J.Gilder & Co. Ltd. in Sheffield, which began selling Volkswagens in 1953.

The Brazilian version of the beetle, where it is called "Fusca" began its sales in 1953 with parts from German only by 1959 all of the beetles where 100% Brazilian made, the Brazilian Type 1s have four different engines: 1,200 cc, 1,300 cc, 1,500 cc, and 1,600 cc and also never received electronic fuel injection only carburetors (one or two one-barrels) throughout its entire life.The Brazilian-produced versions have been sold in neighboring South American nations bordering Brazil, including Argentina, Uruguay, and Peru.

The Volkswagen Type 1 chassis was used as the basis for an mine-protected Armored Personnel Carrier called the Leopard security vehicle.

Mexican production began in 1955 because of agreements with companies such as Chrysler in Mexico and the Studebaker-Packard Corporation which assembled cars imported in Completely Knocked Down form. In 1964, they began to be locally produced; the end of production in Mexico can be attributed primarily to Mexican political measures: the Beetles no longer met emissions standards for Mexico City, in which the ubiquitous Beetles were used as taxicabs; and the government outlawed their use as taxicabs because of rising crime rates, requiring only four-door vehicles be used.

Official importation of the Volkswagen Beetle into Australia began in 1953, with local assembly operations commencing the following year.

The Beetle was also produced in South Africa at the Uitenhage plant.

Like its contemporaries, the Mini and the Citroën 2CV, the Beetle has been regarded as something of a "cult" car since its 1960s association with the hippie movement and surf culture; and the obvious attributes of its unique and quirky design. (For example, the Beetle could float on water thanks to its sealed floor pans and overall tight construction.) Much like their Type 2 counterparts, Beetles were psychedelically painted and considered an ancestor of art cars. One of the logos used by the Houston Art Car Klub incorporated a Beetle with a cowboy hat.

The Beetle has made numerous appearances in Hollywood films, most notably The Love Bug comedy series (Disney) from 1968 to 2005, starring as "Herbie", a pearl-white, fabric-sunroofed 1963 Beetle—racing number 53.

The Arrival (1996, science fiction) featured a few Mexican Beetles in the film (in one scene Charlie Sheen's character hides in the notoriously cramped trunk of a Beetle). In Woody Allen's Sleeper (1973), a Volkswagen is still able to start after having been abandoned in a cave for 200 years. ("They really built these things, didn't they?") In the comedy hit What's Up, Doc? (1972), Ryan O'Neal's and Barbra Streisand's characters, after a climactic car chase, end up floating in San Francisco Bay in their Beetle (see note on construction, previous paragraph).

In all but one instance of the cartoon show The Real Ghostbusters the Ghostbusters secretary Janine Melnitz owned a Beetle convertible. First seen as a red car in the second season episode "Beneath These Streets" it became pink in all future appearances. The Kenner made toy line for the show also included a licensed yellow Beetle convertible that transformed into a ghost. The Toy was called the "Highway Haunter" and seated 2 figures and came with a removable "engine" in the rear that had a ghost designed on the opposite side.

Also made famous is the Autobot Bumblebee, a canary yellow Beetle in the toy, comic and cartoon line The Transformers. The Throttlebot, Legends and Generation 2 toy line versions of Bumblebee also transformed from robot to VW Beetle, though the Throttlebot-type was called Goldbug as it was a golden 1975 Super Beetle. (Note, too, that the G2 toy was painted anodized gold in color.) In other countries, 'Bumblebee the Beetle' has been released in various colors. For the 2007 Transformers film director Michael Bay decided that Bumblebee would not become a Beetle to avoid comparisons with Herbie, nevertheless the Beetle made a cameo appearance in the live-action movie next to the Autobot's new form the Chevrolet Camaro.

During the early 1970s, the Beetle was used for advertisements where graphic art ads were decaled on newly-sold Volkswagens. A marketing consultant (Charlie E. Bird) in the Los Angeles area came up with the "Beetleboard" concept. Both standard and Super Beetles were used, until the original Beetle ceased production in Europe in 1978. This trend was resurrected after the New Beetle entered production.[1]

The Volkswagen Beetle has built a large fan base among off-road types in the form of the Baja Bug. Today, there are many online clubs and communities that keep Beetle aficionadoes on touch.

Even the sighting of a Volkswagen Beetle is cause for violent fun in the car-sighting game known as "Slug-Bug" or Punch Buggy.

The Beetle is also one of the most commonly reproduced cars as a toy or model of all sizes. Hot Wheels and Matchbox produced many near stock and outrageously styled and customized drag racing and modified dune buggy beetles. Most manufacturers of toy cars have included a Beetle in their line at one time or another.

A Beetle appears on the cover of The Beatles' iconic album Abbey Road. The Volkswagen Beetle parked next to the zebra crossing belonged to one of the people living in the apartment across from the recording studio. After the album came out, the number plate was stolen repeatedly from the car. In 1986, the car was sold at an auction for $23,000 and is currently on display at the Volkswagen museum in Wolfsburg, Germany.

In the book series "The Dresden Files" by Jim Butcher, the lead character Harry Dresden drives a pieced together VW Bug named the "Blue Beetle."

The famous "Think Small" Beetle ad campaign of the early 1960s is referenced in Mad Men as a potential threat to traditional advertising.

The Fremont Troll sculpture, under a bridge in Fremont, Washington has an actual VW Beetle clutched in his hand.

In the 1968 movie comedy Bye Bye Braverman and the 1964 novel upon which it is based, To an Early Grave, a cramped Beetle is used as the vehicle by a quartet of Jewish literary intellectuals traveling from Greenwich Village to Brooklyn to attend the funeral of a deceased member of their circle, and its Nazi heritage is repeatedly a subject of discussion.

The Beetle placed at #1 in the Top Gear Book of Crap Cars in 2004. Also, in the African Adventure Special, any presenter who's car broke down would have had to complete the trek across Botswana in a Beetle, reflecting their mutual loathing of the car.