Autopedia
Register
Don't have an account?
Sign In
Advertisement
in: Pages with the First Anniversary Infobox Upgrade

The Triumph Stag was a British car sold between 1970 and 1978 by the Triumph Motor Company, which featured styling by the Italian designer Giovanni Michelotti.

Warranty options and scheduled maintainance information should be mentioned here. 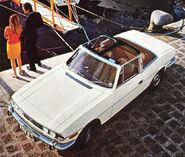 Envisioned as a luxury sports car, the Triumph Stag was designed to be a gentleman's sports tourer, to compete directly with the Mercedes-Benz SL class models. All Stags were four-seater convertible coupés; for structural rigidity, the Stag required a B-pillar "roll bar" hoop connected to the windscreen frame by a T-bar. A removable hardtop was a popular factory option for the early Stags, and was later supplied as a standard fitment.

The car started as a styling experiment literally cut and shaped from a 1963-4 Triumph 2000 pre-production saloon, which had also been styled by Michelotti, and loaned to him by Harry Webster, Director of Triumph Engineering from the early to late 1960's. Their agreement was under the premise that if Harry liked the design, Triumph could use the prototype as the basis of a new Triumph model. Harry, who was a long time friend of Giovanni who he called "Micho", absolutely loved the design and spirited the prototype back to England. The end result, a two door drop head (convertible) had little in common with the styling of its progenitor 2000, but retained the suspension and drive line. Triumph liked the Michelotti design so much that they propagated the styling lines of the Stag into the new T2000/T2500 saloon and estate model lines of the 1970's.

It has been alleged that internal politics meant that Triumph intended, but were unable, to use the proven but old technology General Motors designed all aluminium Rover V8. This is myth. Rover, also owned by British Leyland, simply could not supply the numbers of aluminium V8 engines to match the anticipated production of the Stag. Besides, Harry Webster had already started development and testing of a new unique, all Triumph designed overhead cam (OHC) 2.5 litre fuel injected (PI) V8 to be used in the Stag, large saloons and estate cars. The vision was to allow Triumph to compete in the highly desired V8 marketplace. Under the direction of Harry's replacement, Spen King in 1968, the new Triumph OHC 2.5 PI V8 was enlarged to 2997 cc (3.0 litre) to increase torque and the troublesome fuel injection dropped in favour of dual Zenith-Stromberg 175 CDSE carburetors to meet emission standards of the target market - USA.

The Triumph Slant-4 engine shared the same basic design as the Triumph V8, consisting of a single overhead cam cast iron block with aluminium heads. However the cylinder heads of the two engines do not share the same footprint on their respective engine blocks. This same Triumph Slant-4 engine manufactured by StanPart was initially used in the Saab 99. Using a gear driven water pump, the Slant 4 could be easily installed in a front wheel drive car. This same water pump design was used in the Stag V8.

As in the Triumph 2000 model line, monocoque construction was employed, as was fully independent suspension—MacPherson struts in front, semi-trailing arms at the rear. Braking was by front disc and rear drum brakes, while steering was power-assisted rack and pinion.

The car was launched one year late in 1970, to a fairly warm welcome at the various international auto shows, which soon turned sour after delivery to the market with reports of engine problems. Some of these were due to the perennial problem of poor build quality, endemic to the British motor industry of the time, while others related to what some feel were the fatal design problems in the engine. These included:

Most cars were fitted with a Borg-Warner 3-speed automatic transmission. The other choice was a derivative of the ancient TR-2 gearbox which had been modified and improved over the years for use in the TR4/A/IRS/TR5/250/6. First gear ratio was raised and needle roller bearings were used in place of the bronze bushings on the layshaft. Early models could be ordered with an A-type Laycock overdrive unit and later ones frequently came with a J-type Laycock unit. The overdrive option is highly desirable as the engine RPM is excessive without it.

Other than the choice of transmissions there were very few factory installed options. Some early cars came with just the soft-top and some with just the hard-top but most ended up with both. Electric windows, power steering and power assisted brakes were standard. Options included air conditioning, luggage rack, Koni shock absorbers, floor mats and Lucas Square Eight fog lamps, and a range of aftermarket products, most of which were dealer installed as optional accessories.

The Triumph Stag is now a fairly desirable classic car, with sizeable club and owner support, a number of specialist suppliers, and reasonably strong prices. About 9,000 Stags are believed to survive in the United Kingdom. The car's popularity is possibly due to its comparative rarity, its unique timeless Michelotti styling, and that, while the car was liable to engine problems, many surviving vehicles are lacking in the rust and electrical problems that beset many British cars of the period. All of the problems associated over the years have been solved by those enthusiast clubs supporting the Stag, elevating this classic to its intended place in popularity envisioned by its designers.