Autopedia
Register
Don't have an account?
Sign In
Advertisement
in: Pages with the First Anniversary Infobox Upgrade, Current Models, Toyota vehicles,
and 9 more

The Toyota Tundra is a full-size pickup truck sold by Toyota, replacing the T100. The Tundra was nominated for the North American Truck of the Year award and was Motor Trend magazine's Truck of the Year for 2000.

The 2006 Tundra comes in 3 major trims: the Tundra Regular Cab, Tundra Access Cab, and Tundra Double Cab. Each one of these is available in a choice of 2WD or 4WD, manual or automatic transmission, and either a V6 or V8 engine. There is also a special Darrell Waltrip edition of the Tundra, only 2000 of which were produced and sold.

RECALL ALERT: On December 14th, 2007, Toyota issued a recall affecting 15,600 trucks equipped with 4WD. The recall stems from a faulty rear propeller shaft which could separate at a joint because it was improperly heat treated by Toyota's supplier. This latest recall stands as the most recent in a growing list that has been plaguing the embattled truck since its debut. [5]

RECALL ALERT: On January 25th, 2008, Toyota announced a recall for the Toyota Tundra entailing 15,616 MY 2007 Tundra 4-wheel drive pickup trucks. The issue is due to the improper heat treatment of the slip yokes in the manufacturing process which may break causing the propeller shaft to separate at the joint and come into contact with the road surface or the fuel tank resulting in a loss of vehicle control or even a fuel leak. [6]

Though it has only received 3/5 stars on its rollover tests, the Toyota Tundra has consistently received 4/5 and 5/5 star ratings from the National Highway Traffic Safety Administration (NHTSA) for its frontal and side impact tests. For comprehensive crash test information see CarsDirect or the NHTSA website. 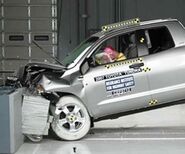 The Toyota Tundra is available in the following colors:

In 2003, Toyota committed to producing a "hybrid version of every model by 2012."[7] By January 2008, Toyota backed off this commitment, stating that a "hybrid isn't the best technology" for the Tundra and Sequoia at this time. Toyota did re-commit to producing a hybrid version of each model in their lineup by 2020, but this has been viewed as more of a public relations move than a true commitment.[8]

Kelley Blue Book estimates that the Tundra should hold 65-67% of its original value after 24 months and 50-52% of its value after 48 months. They report that this is better than the Ford F150 and Nissan Titan, and far better than the Dodge Ram 1500 and Chevrolet Silverado 1500.

A much larger Tundra was introduced at the Chicago Auto Show for 2007. It is larger than the competing Ford F-Series, Chevrolet Silverado (and Avalanche), Dodge Ram, and Nissan Titan and sports styling like the Toyota FTX concept shown at the North American International Auto Show in 2004. The Tundra is built in San Antonio, Texas and Gibson County, Indiana for the North American market.

Publicly introduced in 1998 as a 1999 model, the Tundra was initially to be called the T150. However, the Ford Motor Company and automotive pundits felt that this name was too close to the market-leading Ford F150, and following a lawsuit by Ford, the truck was quickly renamed to Tundra.

Toyota countersued, and forced Ford to change the name of their Lincoln LS6 and LS8, introduced around the same time as the Tundra, as Toyota felt that it was too close to that of its iconic Lexus LS sedan.

The Tundra was larger than the T100; featuring a 4.7 liter 2UZ-FE V8 with 245 horsepower and 315 lb-ft of torque, but still suffered as being too small and carlike to pose a serious threat to the domestic pickup trucks. Although sales were double the dismal rate of the T100, and though it arguably ate some sales from Dodge, the 100,000 Tundras sold each year failed to dent the surging Ford and GM trucks.

This is the predecessor to the Tundra and was how toyota started with the full-size pickups. It was criticized for being too small and still using similar engines to a compact truck. Engine choices included either a 2.7 liter 4-cylinder or 3.4 liter V6, both supercharged to make up for the lack of a V8.

Some prototypes of the Tundra were given to racing legends Ivan "Ironman" Stewart and Rod Millen.

A Toyota Tundra was featured in Terminator 3: Rise of the Machines, and in 2003 the truck was also available in a special edition inspired by this movie and called Tundra T3.

A Double Cab version of Tundra was unveiled at the 2003 Chicago Auto Show and joined the Regular and Access Cab models in the 2004 lineup.

In 2004, the Tundra became part of the NASCAR Craftsman Truck Series.