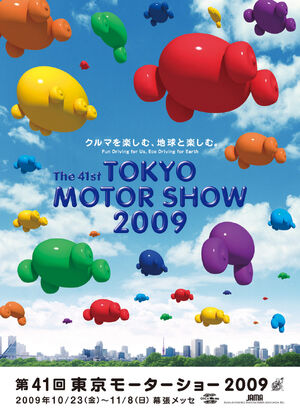 The Tokyo Motor Show (東京モーターショー) is a biennial auto show held in October-November at the Makuhari Messe, Chiba City, Japan for cars, motorcycles and commercial vehicles. Hosted by the Japan Automobile Manufacturers Association (JAMA), it is a recognized international show by the Organisation Internationale des Constructeurs d'Automobiles, and normally sees more concept cars than actual production car introductions which is the reason why the auto press see the show as one of the motorshow's big five (along with Detroit, Geneva, Frankfurt and Paris).

The show, then called All Japan Motor Show was first held in an outdoor venue called Hibiya Park, the show was considered a success with 547,000 visitors over ten days and 254 exhibitors displaying 267 vehicles, but of the amount of vehicles only 17 of them were passenger cars as the show was dominated by commercial vehicles. In 1958, due to construction of a subway and underground parking lot near Hibiya Park, the show was shifted to the Korakuen Bicycle Racing Track. The show, as the previous year was marred by heavy rain, in 1959 the event moved indoor to its newly opened Harumi Showplace venue which was three times the size of its previous venue.

Onward from 1973, as the organisers decided not to host a show for the following year due to the international energy crisis, the show became a biennial event after the organisers decided that the event should be held every two years. The show relocated to its current venue, the Makuhari Messe in 1989 and due to high public demand for vehicles in everyday use and the fact concept cars dominate the show, the show returned to being an annual event from 2001 to 2005 with a show for passenger cars and motorcycle and another for commercial vehicles for the following year. However from 2007 onwards the event will (once again) return to a biennial schedule which combines both passenger and commercial vehicles, including motorcycles and auto parts.

The first Tokyo Motor Show was held in Hibiya Park from April 20 to April 29 1954. Of the 267 vehicles on display, only seventeen were passenger cars, which reflected the paucity of personal family transport in Japan at the time. Trucks, buses, and motorcycles made up most of the exhibits. Approximately 547,000 visitors attended the show over the ten days, where the most prominent cars were the Austin A40, Hillman Minx and the newly introduced Renault 4CV, as well as domestic vehicles such as the Prince Sedan AISH, Toyota Toyopet Super RH; Datsun Passenger Delux (Model DB-5), Ohta Sedan and Van, and three-wheeled vehicles from Daihatsu.[1]

The second Tokyo Motor Show was held over twelve days, beginning on May 7 1955. Almost 785,000 visitors attended, among them HIH Prince Akihito. The highlights of the passenger cars on display were the new Datsun 110, Toyopet Crown RS and Toyopet Master RR.[2]

Passenger cars began to assume the greatest prominence at the third Tokyo Motor Show which opened on April 20 1956, thanks in great part due to an initiative spearheaded by the Ministry of International Trade and Industry called the "people's car plan". Although its stated target of a four seat car capable of 100 kilometres per hour and available for ¥150,000 was unrealsitic — despite being twice the national average income at the time, it was still only one fifth of what a typical vehicle cost — it was given credit as the spur for domestic automakers to strive to lower their prices.[3]

Although only 527,000 people visited the fourth show between May 9 and May 19 1957, significant vehicles made their debut; the first of the long running Toyota Corona and Prince Skyline were introduced, as well as a prototype of the Datsun Sports.[4]

The 2001 show saw the following introductions:

The 2005 show saw the following introductions:

The 2007 show saw the following introductions:

Concepts for new hybrids, plug-in hybrids, electric vehicles from Japan's leading automakers are now on display at the Tokyo Motor Show. As one example, Toyota Motor Corporation introduced its 1/X (pronounced "one-Xth") concept vehicle, a Prius-like sedan that tips the scales at a third of the weight of the Prius and obtains double the Prius' fuel economy. The vehicle cuts its weight by using carbon-fiber-reinforced plastic in its frame and boosts its fuel economy with a small plug-in hybrid powertrain that can be fueled with either gasoline or E85, a blend of 85% ethanol and 15% gasoline. Toyota's other plug-in hybrid concept, the Hi-CT, is a small, boxy, two-door vehicle aimed at young car buyers. In addition, Toyota's luxury brand, Lexus, introduced its next-generation hybrid sport utility vehicle, the LF-Xh, an all-wheel-drive vehicle powered by a V6 engine teamed up with a high-output electric motor.

General Motors, Ford, Chrysler and Hyundai did not attend the show.

Among the other automakers, Honda Motor Company, Ltd., unveiled the CR-Z, a "next-generation lightweight sports car" that features Honda's hybrid electric drivetrain, and the PUYO, another small, boxy vehicle, powered by a fuel cell. Honda will also unveil the one-wheeled scooter transport, the Honda U3-X.

But Japanese automakers weren't the only ones unveiling clean car concepts in Tokyo. Audi arrived with its "Metroproject Quattro," a plug-in hybrid with a direct-injection, turbocharged, 150 horsepower (110 kW) gasoline engine mounted up front and a 30-kilowatt motor on its rear axle. The concept vehicle employs a lithium-ion battery pack that allows it to run on electric power only.

The following were introduced at the 2009 show:

2004 Tokyo Show poster
Add a photo to this gallery

Retrieved from "https://automobile.fandom.com/wiki/Tokyo_Motor_Show?oldid=90664"
Community content is available under CC-BY-SA unless otherwise noted.