Autopedia
Register
Don't have an account?
Sign In
Advertisement
in: Article stubs, Current Models, All wheel drive vehicles,
and 9 more

The first Subaru Legacy Outback was introduced in the United States in 1996. It was a Legacy station wagon with all-wheel drive, body-cladding, off-road tires and slightly higher ground clearance. It was marketed using Subaru's trademarked phrase: "The World's First Sport Utility Wagon." All Outbacks are built in Lafayette, Indiana. 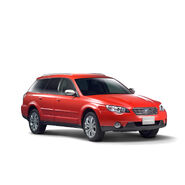 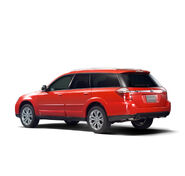 The 2007 Subaru Outback comes in three body styles and several trims speficic to each body style. The three styles are the sedan, wagon, and sport wagon, which is a shorter version of the wagon. While the Outback Sport wagon is only available in trim, the wagon comes in 2.5, 2.5i, 2.5 XT Limited, and 3.0 R L.L. Bean versions. In addition, the sedan is available in two trims, the 2.5i Limited and the 3.0 R L.L. Bean Edition. Features and options will differ according to trim level, and the only differences between the sedan and wagon versions, in terms of trim, are the dimensions associated with each respective body style. Some of the features available include:

Today's actual prices for the Subaru Outback can be found at CarsDirect.

The latest generation of the Outback was only introduced in 2005, so long-term reliability data is not yet available. However, the 2003 and 2004 models, which belong to the previous generation, received an overall Green rating in every category from Automotive Information Systems.

Colors will vary by trim and body style, and a full list is available at CarsDirect.com. Some of the possible combinations are:

According to Kelley Blue Book, "competitive vehicles such as the Volvo XC70 and the Volkswagen Passat 4Motion cost more than the Outback yet don't retain the same strong resale value. The Dodge Magnum SXT with all-wheel drive is priced similarly to the Outback 3.0 R, but it, too, lags behind the Outback's high resale values."

In 2003, with the debut of the fourth-generation Legacy at the 60th Frankfurt Auto Show, the Outback name is now being used worldwide with the launch of the second-generation Outback wagon. Models equipped with a 3.0 L H6 were introduced at the 2004 Chicago Auto Show.

Subaru of America executives created the Outback because the SUV craze had at that point reached a fevered pitch with customers demanding SUVs and shunning Subaru's station wagons (even when equipped with all-wheel drive) based on image concerns, leaving dealers clamoring for a SUV-like product to sell.

The Outback turned out to be a success, handily outselling its Legacy progenitor. Clever ads featured Australian "Crocodile Dundee" star Paul Hogan using the Outback in adventurous situations where it was portrayed besting its competitors, notably the Ford Explorer.

An Outback Sport, based on the Subaru Impreza five-door hatchback was introduced in 1998.

The Outback SUS (for "Sport Utility Sedan") was launched with a limited production test run sold in New England in 1999 and based on its success, was rolled out nationwide the following year.

In 2000, Outback became its own model and added a sedan, as well as an available horizontal six-cylinder engine.

In the highest trim level (VDC, for Vehicle Dynamics Control), a 200 W McIntosh stereo system was standard from 2001 to 2003. These were the only vehicles ever factory-equipped with McIntosh stereo equipment.

The Outback is Subaru's top of the line model, so it's imperative that the automaker stays up with the latest. A slate of modifications for the 2019 Subaru Outback model year, appearing at the New York Auto Show, keeps the Outback pleasant and new.

Subaru hasn't yet declared how much the 2019 Subaru Outback will cost, yet said models should begin landing in dealerships around August. The 2018 Subaru Outback ran $25,520 to begin and could venture into the upper-$30,000 with the optional 6-cylinder engine and more inside conveniences.

All models of the 2019 Subaru Outback have a standard rearview camera and all yet the base offer propelled safety features that should enable the car to qualify as a Top Safety Pick+ by the IIHS. Subaru's suite of cutting edge safety features, which it calls EyeSight, utilizes front aligned cameras set behind the windshield to help control or stop the car in an emergency.

Other companies followed suit with similar raised four wheel drive station wagons as stop-gaps before their own SUVs were launched, or if they did not envisage introducing one. These included the Audi A6 Allroad, Volvo XC70, Alfa Romeo 156 CrossWagon and the Holden Adventra.

The Outback was available in Japan from 1995 as the Subaru Legacy Grandwagon.

The phrase "The World's First Sport Utility Wagon" may be trademarked, but it is not entirely accurate. In 1979, American Motors launched the AMC Concord-based AMC Eagle, which was similar, but had suffered poor sales and was discontinued in 1988.

This page uses content from Wikipedia; see Subaru Outback, which includes these contributors.