In 1998, Subaru of Japan produced a widebody, 2-door, Impreza called the 22B STi. The 22B was used to commemorate both Subaru's 40th anniversary as well as the 3rd consecutive manufacturer's title for Subaru in the FIA World Rally Championship. On the release of the sales, all 399 sold out from 30 minutes to 48 hours, depending on the report.[5] The cars had the starting VIN code of GC8E2SD. Another 25 were produced for export markets - see the 22B Type UK below.

This car was given a unique color of blue and had fender flared widebody taken from the Peter Stevens designed WRC car, thus widening the width by 80 mm (3.15 inches) for a total of 1,770 mm (69.7). During assembly, a WRX Type R chassis was taken off the line. The fenders were replaced with the 22B STi fenders. The car's curb weight is 1,270 kg (2,800 lb). The suspension is provided by Bilstein. The brakes were standard 4-piston/2-piston brakes. However, the color is red and the Subaru name casted on the brake calipers and painted white. The wheels were increased in size from the standard WRX Type R STi from 16x7" to 17x8.5" BBS Elektra wheels. The car is shod with 235/40 ZR17 Pirelli P Zeros. The clutch was upgraded to a sintered twin clutch with a ceramic disk. The transmission ratios are the same as the standard WRX Type R, but the gears were shot-peened for added reliability. The car has a unique hood, a WRC-inspired front bumper and a unique adjustable rear wing.

The origin of the name 22B has often been debated. Many assume 22 referred to the 2.2 liter displacement and the B was for the Bilstein suspension. This would correlate with the idea that Subaru sells a Legacy Spec B, where the B represents the Bilstein suspension. Others believe that 22B was meant to represent the much recognized 555 decal (555 is a tobacco company that was a major sponsor for Subaru in the WRC) on the WRC car as 22B is a hexadecimal representation of the decimal number, 555. But the truth is simply that 22 represents the 2.2 liter engine, and B is Subaru of Japans representative letter for turbocharged.

It must be noted that the 22B STi that is supposed to be #13 was never given the plaque. Subaru of America imported #13 to be used as a press car. Three 22B STis were given the #000 plaque, 2 went to the World Rally car drivers for Subaru at the time Colin McRae and Nicky Grist, with the third going to David Lapworth of Prodrive. 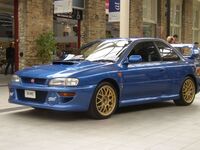 Sonic Blue
Add a photo to this gallery

Retrieved from "https://automobile.fandom.com/wiki/Subaru_Impreza_22B_STi?oldid=111371"
Community content is available under CC-BY-SA unless otherwise noted.