The Subaru Forester, released in the US in 1998, is a lightweight, small crossover SUV (or arguably a station wagon) based on the Subaru Impreza. Subaru advertising employed the slogan "SUV tough, Car Easy" to appeal to the SUV-oriented market; and to this end, the Forester has features associated with SUVs such as a large, boxy cargo area and more ground clearance than other Subaru models (although it employs a car-like unibody chassis, rather than the body-on-frame construction associated with trucks and larger SUVs). 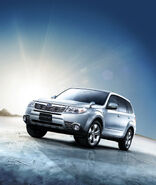 Today's actual prices for the Subaru Forester can be found at CarsDirect.

While there have been complaints of transmission problems with vehicles with the turbo/5-speed combination, most have been fairly reliable. Interior build quality has been known to show wear early on, with Car and Driver's long term test car showing premature interior wear and squeaks and rattles at 40,000 miles. While the car will appear and sound worn, there will be know repairs needed causing its reliabilty rating to stay high. Long term durability is impeccable, as revealed at www.Edmunds.com, and www.Carsurvey.org

The Forester has received superb marks in crash tests performed by the NHTSA, scoring 5/5 stars in every category but Rollover Rating, for which it earned 4/5 stars. The following safety features are also standard on every trim:

Colors for the Forester can be found at CarsDirect.com.

There are no plans for hybrid models of the Forester.

Kelley Blue Book estimates that the Forester will have have a better resale value than the Ford Escape or Mazda Tribute, yet still trail behind the Honda CR-V in this category. Automotive Lease Group rates the Forester's resale value at 3 stars out of 5, which is equivelant to a D-.

In 2003, a turbocharged Forester, the XT, was released alongside the naturally-aspirated X and XS in the United States as a 2004 model, however the same model had been available since the late 1990s elsewhere in the world. The XT model features a 2.5 L turbocharged engine mated with the same Mitsubishi TD04 turbocharger used in the Subaru Impreza WRX. In fact, the engine in the 2004 to 2005 Forester XT is identical to the American market Subaru Impreza WRX STi except for using the smaller TD04 turbocharger from the WRX, a smaller intercooler, different exhaust system, and different engine management programming.

The 2003 Forester also features weight-saving refinements such as an aluminum hood, perforated rails, and a hydro-formed front frame.

In 2006, the turbocharged engine (powering the Forester XT) that won the International Engine of the Year is also being used in the Subaru Impreza WRX, as well as the re-badged Saab 9-2X.

Subaru released a diesel version of the Forester for the European market and a now Australian market in 2010.

Up until recently, the Forester was also sold in India as a Chevrolet alongside other Chevrolet models sold there. This model featured a naturally aspirated 2.0 L flat-4 engine rated at 120hp. However, since General Motors no longer holds an ownership stake in Subaru's parent company, Fuji Heavy Industries, this arrangement is in question.

The Forester has three main models available in Australia:

The difference between the X and the XS is the styling of the car through its accessories. Both the XS and the XT come with the option of having a "Luxury Pack" fitted - allowing for leather seats and a sunroof. Besides the difference in engine between the X or XS when compared to the XT, there are other minor styling differences like the addition of a MOMO steering wheel as standard on the XT model.

According to the What Women Want survey conducted by the RACV in 2003, the Forester is the most popular choice amongst women buying a Subaru.

Retrieved from "https://automobile.fandom.com/wiki/Subaru_Forester?oldid=70262"
Community content is available under CC-BY-SA unless otherwise noted.