The Smart fortwo is the original Smart model that was launched in 1998 throughout Europe as the City Coupe. The name Fortwo was introduced when Smart began to produce new models.

On June 28, 2006, DaimlerChrysler confirmed that retailer UnitedAuto Group "will be responsible for awarding potential dealerships and developing and maintaining a Smart vehicle dealership network throughout the U.S. and Puerto Rico."

Instead of trims or styles, fortwo has three 'lines': Pure, Passion Coupe & Passion Cabriolet (US market).

The Pure is the basic model, providing a basic configuration and minimal extras. It is the least expensive of the three.

The Passion is considered the luxury line, with panoramic roof, alloy rims, air conditioning, electric mirrors, and other specialty options including a cabriolet version.

In Europe the the ForTwo is also availible in the 'Pulse' line, which features sporty features such as wider tires, standard steering wheel gear shift paddles. The 'cabrio' version is availible in all three lines (pure, pulse, and passion).

On the contrary, the turbo charged models, are often critized for high fuel consumption. Some real-life figures resulted in consumption above 30 mpg. The official specification (European models) states 6.3l/100km and 6.4l/100km (approx. 37 mpg) for the 84 bhp and 102 bhp model respectively. Nevertheless, many drivers considered this a small price to pay for the more agile, powerful models.

The ForTwo model introduced in 2007 is availible with a total of four petrol engines and one diesel engines. The petrol engines are all 999 cc 3-cylinder in-line type. The European petrol models are consistist of naturally aspirated with either 61 bhp or 71 bph and turbo charged. The turbo charged model produces 84 bhp, and is also availible as a Brabus model sold officially by Smart; with 102 bhp (98 bhp in the pre 2010 facelift model) featuring several differences such as sporty exhust system, lower and stiffer suspension, and various exterior and interior details. In 2008 the naturally aspirated engines where offered with MHD (micro hybrid drive) system, an engine start-stop system for further fuel economy. Later that year the system become part of the standard equipment on those models.

All second generation ForTwo models are equipped with with a manual automated 5 speed transmission. Although the gear box functions as an automatic, until the 2010 the European models where not fully automatic in their standard equipment. Automatic gear changing optional was identified by the so called "Soft Touch". This option provided a button on the side of the gear lever which changes between automatic and manual mode. Models without the "Soft Touch" required the driver to manually shift the gear lever to "+/-" positions in order to change gears. Optional shift pedals on the steering wheel are availible as an option.

The fortwo's Mercedes Benz heritage comes through here, earning the car high marks for reliability in Europe, Japan, and Canada.

Nevertheless, the first generation (450) models where often criticized for the unreliable engines and turbo chargers. This mostly concerned the 600 cc model produced until the 2003, however the later 700 cc model (2003-2007) had retained the main issue of short motor and turbo life which rearly exceed 50,000 miles. These models where also often criticized for poor assembly quality which was performed by Swatch, the Swiss watch manufacturer. The major improvement came with the second generation model (451) introduced in 2007. The 999 cc engines was manufactured by Mitsubishi, unlike the first generation model which had engines manufactured by Mercedes, which had no prior experiance with small engine units. On the contrary the car essambly was carried out by Mercedes, therefore increasing the overall quality. Unfortunetly, the early second generation models (2007-2008) suffered from several defects that would come out within the first year of exploitation, the major being the gearbox fault, causing the car to refuse to enter reverse. This fault could be sorted by the replacement of the gearbox, normally carried out on guarantee. Other minor flaws included; panoramic roof curtain jams, electric windows failures.

Probably the biggest concern about the smart car people express is the issue of safety. In the US, 'bigger is better' is the normal rule-of-thumb when it comes to deciding which vehicle is safest. With the fortwo, that rule fast becomes becomes roadkill.

The secret to this vehicles safety rating comes from its 'Tridion Safety Cell.' This cell is designed to retain its shape in a collision, transfering much of the impact force back to the other vehicle. The car is designed in such a way that during a frontal or rear collision the tires absorb the force of the impact, contribution to the safety of the passengers inside.

US Safety ratings have not yet been set, but in European ratings[2], the fortwo gets a very respectable 3-stars.

The fortwo also took honours of owning a "Good" rating, the highest rating in the roof crush test conducted by the Insurance Institute of Highway Safety as it withdrew 5.4 times its weight. The car is followed by the Honda Fit, Hyundai Accent, Toyota Yaris and the MINI Cooper. [3]

One of the down sides relating to safety is the tendency of the ForTwo to rollover during severe collisions. This is attributed to the small impact area that can absord the force combained with the light weight of the vehicle.

Colors are one aspect of the Smart that is unique. While the vehicle has one primary color, the Tidion shell comes through at points, and has its own base color. In most instances, the shell is black, but in the Passion trim, the shell is also available in silver.

The rest of the vehicle is made up of interchangeable dent-resistant molded plastic panels. Much like the Saturn lineup, these panels are solid colored, which means if they are scratched, the color remains unchanged. The best part is that you can purchase additional panels from the dealer, allowing you to change the color of your car at will.

In addition to the standard colors, smart is known for releasing limited edition colored vehicles, frequently themed to a partner. Some examples are Barbie Pink and iPod white. These limited edition vehicles often have a custom set of interior options, not available any other way.

In the US, it is tough to define competitors, as there really is nothing specifically that matches up with the smart fortwo. The following are the closest vehicles in size and fuel efficiency.

In the European Market the closest competitor is [Toyota IQ (http://www.toyota-europe.com/cars/new_cars/iq/index.aspx)].

While frequently rumored, there is no official word regarding plans for a hybrid model.

The ForTwo concept is by itself unique. The Smart ForTwo has established a new category of it's own and was able to remain the only player there for more than 10 years. Many of the engineering solution applied on the ForTwo model were yet unseen on super mini cars. This includes the two-seater concept, rear-engine positioning, rear-wheel drive, standard motorized manual transmission, standard ESP, tridion safety cell. 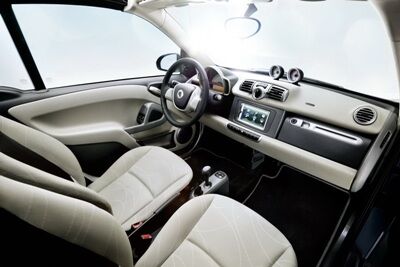 Ellen Degeneres is one of the owners of the Smart fortwo.

In 2005, a swiss couple challenged a law that owners should pay only one parking fee if two cars fit in one space for 18 months. They parked their fortwos in a single parking space in Australia to prove the case. When the Brisbane City Council followed the case, they have indicated that they'll endorce the legal parking of two cars in one spot if they fit.