The Scion tC is a compact sports coupe which was initially introduced by Toyota in 2004 as a concept vehicle under its recently created Scion brand name. Significantly more powerful than its sister vehicles, the xA and xB, the tC offers some extra punch under the hood and promises to appeal to those a bit put off by the xA's size or the xB's funky style.

Cosmetically, very little has changed in the Scion tC since its 2005 debut. In 2006, the audio components received a nice upgrade when controls were placed on the steering wheel and a new head unit with iPod connectivity became available (which became standard on later models). In addition, Toyota Racing Development (TRD) has made an optional supercharger available for the tC which boosts its horsepower from 161hp to a whopping 200hp; however the TRD supercharger has since been discontinued as a dealer option.

In keeping with Scion's simple, Pure Price philosophy, the tC is available in one standard trim: the 2-door coupe.

The Scion tC features a number of standard features, including:

Most owners find that the EPA currently underrates the tC significantly, reporting 24-28mpg in mixed driving and 32mpg or better on the highway.

Cars.com has rated the tC a 5/5 in Reliability, and J.D. Power dubbed it "Highest Ranked Sporty Car in Initial Quality" when it debuted in 2005. Since then the brand has actually outperformed the Toyota brand in reliability. 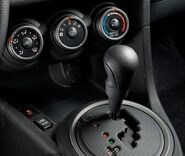 Scion currently does not produce any hybrid vehicles, and there are no plans to release a hybrid version of the tC.

The tC comes standard with a panoramic sunroof, which spans the entire width of the car. The front half of the sunroof tilts and slides, however the rear half is fixed. Both sunroof panels have retractable covers

According to Kelley Blue Book, the 2006 Scion tC was predicted to retain an incredible 68% of its value after 24 months and 57% at 48 months. The 2007 model is expected to have the same kind of resale value.

Cargo space is modest when the back seats are not folded down, and rear passengers taller than 6 feet may feel a bit cramped as well. Other items to consider are a relatively wide turning radius and side mirrors that do not fold in.

In early 2006, a recall was issued for some 2005 and 2006 tCs due to the possibility of the glass wind deflector being shattered by debris. Owners were requested to bring in their vehicles to have a shatter resistant film installed. 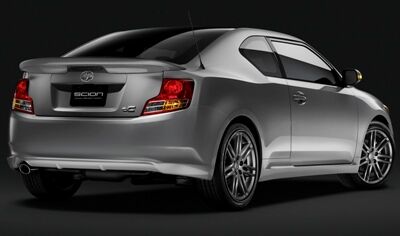 The Scion tC was designed to appeal to the Generation Y market and get them locked into the Toyota brand before any other car manufacturer could have a chance. They hoped to do so by making standard features numerous and optional features extremely easy to add. The Scion lineup in general, including the tC, was designed to replace the Toyota Celica, supplanting it with a sportier selection that would be more attractive to younger buyers.

The Scion tC uses the chassis of the Avensis which is sold in the European market, and the Camry's 2.4L 2AZ-FE I4 engine. Its low price (base MSRP of $17,770 for the 2010 model, incl. all delivery fees) is a major feature, as well as the pure pricing marketing style that Toyota has adopted.

The name tC does not fit in with its stablemates the xA and xB because the name "xC" has already been taken by Volvo for its XC70 and XC90 models. According to Scion, "tC" stands for "Touring Coupe," although rumors exist that tC stands for any number of things, including Toyota Celica.

Beginning in late spring 2004, Scion launched the Release Series (RS) line, limited quantities of their current vehicles pre-packaged with individual numbered badging, exclusive accessories, and other special features. Limited edition vehicles from a marketing standpoint were used to create a buzz for the brandname, with their exterior colors tending to be loud or bright hues (i.e. orange, yellow, red, blue, green). Because of the growing popularity of the Scion product line and the scarce production runs (most dealers only get 2-3 of each RS model), these limited edition vehicles quickly sell out. Preordering is available at each dealership on a first-come, first-served basis. To the customer's benefit, Scion's "Pure Price" MSRP bounds dealerships against market-demand vehicle mark-up. Naturally, resale values of Release Series vehicles command a premium because of their packaged options and scarcity.

Scion's xA and xB models were originally marketed in Japan under the Toyota brand name, but the tC was developed expressly for the US market.