Autopedia
Register
Don't have an account?
Sign In
Advertisement
in: Pages with the First Anniversary Infobox Upgrade, Current Models, Saab vehicles,
and 9 more

The Saab 9-3 is a compact executive car produced by the automaker Saab in Trollhättan, Sweden, although the convertible (cabriolet) version is made under license in Austria. It shares platforms with the Opel Vectra and the Cadillac BLS, although is only similar enough to the Cadillac BLS in order to be made on the same assembly line in Sweden. 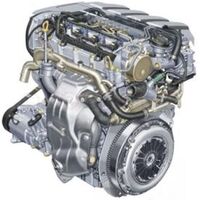 In 2008, the entire Saab 9-3 lineup was awarded the Top Safety Pick Award by the IIHS for the mid-sized category.[6] 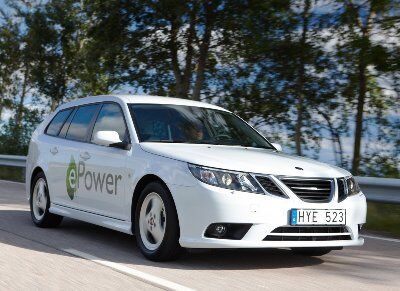 Saab is launching its first ever full electric vehicle in the form of the 9-3 ePower slated to debut at the 2010 Paris Motor Show. The car is motivated by a 184HP electric motor driving the front wheels through a single-speed transmission. Energy is provided by a compact 35.5 kWh lithium-ion battery pack located in a modified floor-pan, in a space occupied by the exhaust system and fuel tank on the standard 9-3 SportWagon. Acceleration to 60 mph (100 kph) takes respectable 9.5 seconds and will continue on to a top speed of 150km/h or 93mph. The projected driving range on a full charge is approximately 200 kilometers or about 124 miles.

The 9-3 will be replaced by a new model based on GM's Epsilon 2 platform, shared with the 2008 9-5. This vehicle will be built in Rüsselsheim, Germany rather than Sweden.

The second-generation model was launched at the Detroit Auto Show in early 2003. All variants feature either a 1.8t or 2.0t (both 2L engines, but with different turbo pressure) straight-4 gasoline engine derived from General Motors' Ecotec family, or a turbocharged 2.8 L High-Feature V6 (starting in 2006). There are two different versions of the turbocharged I4, with the amount of turbo boost determining the power output.

Power in the 9-3 is delivered through the front wheels only. It is available as a four-door sedan, a wagon (introduced 2004, known as the Sport Combi), and a two-door convertible. It is the safest car in its class, including innovations such as Saab Active Head Restraints (SAHR II) to reduce whiplash and ReAxs, passive rear wheel steering to reduce understeering and passive toe-in under heavy braking. Out of these models, the convertible (manufactured by Magna Steyr in Austria beginning in 2003) is the best known, and is the best-selling in its class in many markets.

The 9-3 and the Opel Vectra were the first of General Motors's global Epsilon platform, which has now been lengthened to accommodate three new cousins, the Chevrolet Malibu/Malibu Maxx and the Pontiac G6.

A special "20 Years Edition Aero Convertible" for the American market was unveiled at the Los Angeles Auto Show in January 2006 to celebrate 20 years since the introduction of the 900 convertible.

The original 9-3 was a rebadged, improved last-generation Saab 900. Launched in 1998 for the 1999 model year, it featured slightly sleeker styling with some models sporting a black rear spoiler and removed Saab's trademark centrally-mounted "snow flap". It was available as a three or five-door hatchback, and as a two-door convertible. This was the last small Saab to use the company's H engine.

In the What Women Want survey conducted by the RACV in 2003, the 9-3 convertible is the most popular choice among women buying a Saab.