The Renault Megane is a small family hatchback produced by Renault.

The Renault Megane is the the first car in its class to achieve a 5 star EuroNCAP safety rating. It also scored 2 stars out of 4 for pedestrian safety.[9] [10]

Because the Megane was the first small family hatchback to score 5 stars by EuroNCAP, Top Gear wanted to prove its safety. In Series 2, Episode 7, the Megane, roadtested by Richard Hammond was sacrificed by crashing into a stationary Mk 1 Mondeo at over 30 mph driven by Lee, the stuntman. After the crash, Lee was all good and he did not sustain any injuries unlike in other car crashes. [11] 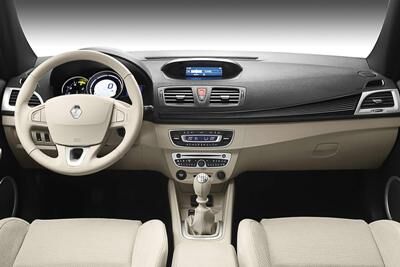 According to the Which? Car Owner's Satsifaction survey, the 1996-2003 Megane is described as "a piece of rubbish".

The Megane CC is a foldable hardtop convertible version.

The Megane is another Renaultsport Megane released. On the exterior, the R26 can be recognised with decals of checkered flag "F1 Team" on the bumpers, the doors and the roof. In the inside, you find alloy sports pedals and a red steering wheel marker as well as Recaro bucket seats, a chilled glovebox and a numbered plaque beneath the handbrake reinforces the F1 connection. It's 2 litre intercooled turbocharged engine produces 168 kW @ 5500 rpm and 310 Nm of torque @ 3000 rpm courtsey of the high flowing exhaust manifold and remapped ECU. Power goes through its 6 speed transaxle with the limited slip diiferential. The R26 has stiffer springs, uprated dampers and a 10% stiffer rear anti-roll bar and has 4 disc brakes with front Brembo calipers behind the Oz 12 spoke 18 inch Alloy wheels. The colours the Megane R26 come with are Black or Pearlescent Yellow.

The 2008 London Motor Show played host to the unveiling of Renault's new 450 unit limited edition track-ready variant of the Megane (and road-legal version of the Megane RS 230 F1 Team R26), the Megane R26.R. Motivation comes from the race car's 230 Hp 2.0-liter turbocharged engine, however, mated to a 6-speed gearbox with a short-shift gear linkage, a limited slip differential and a weight reduction of 271 lbs. This means the R26.R can accelerate from naught to 100 kph in 6 seconds and, impressively, turn out 27.7 mpg (8.5 lt/100km or 33.2 UK mpg). However, the R26.R's party piece is its official Nürburgring lap time of 8 minutes and 17 seconds. While not as impressive as the Nissan GT-R or Porsche 911 Turbo's low 7 min 20-something second times, this makes the R26.R comfortably the fastest Front-engined, FWD car round the fearsome German circuit. Prices begin at £22,990 OTR ($46,000 or €29,000) and will only be available in select western European countries. [12]