Autopedia
Register
Don't have an account?
Sign In
Advertisement
in: Pages with the First Anniversary Infobox Upgrade, Renault vehicles, Renault,
and 2 more

The Renault Kangoo and Kangoo Express are panel vans that have been produced by Renault since 1997. This is the most popular panel van in Europe and Latin America. It's mainly produced in Maubeuge, France and in Santa Isabel, Argentina. The Kangoo is the first panel van to exclusively use the chassis from a family car (the first combi vans where conversions of cars).It is also sold by Nissan in Latin America and Europe as the Kubistar. When the windows and rear seats are removed it can be used as a van. It can be converted for wheelchair access. Both models of the kangoo are sold with four wheel drive, raised ride height and altered styling . A lengthened version is also sold, with more space , as well a pickup version . In some parts of the world the Kangoo is made in Nissan plants. 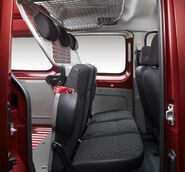 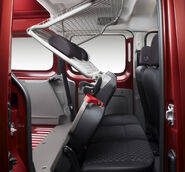 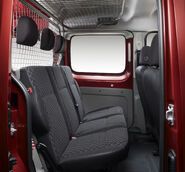 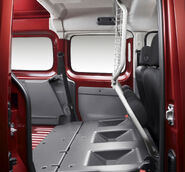 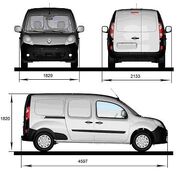 "Kangoo is no fire-breather, but it performs well in the city and can cruise on motorways without feeling too strained. When it's not fully loaded[2]".

Most people would complain this car is too slow but it would be more than enough for most . The speed depends on which engine you have, you can go up to 101mph with the V4 petrol engine in the 1.6 16v Auto 5 door model. 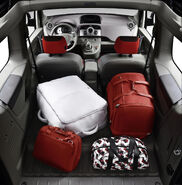 Renault made by owner Electric Kangoo in two versions:

After 2004, Both an electric and a plugin hybrid model was produced also for a limited time by Cleanova

The interior is very gray and the plastics are very poor for a European car . The main selling point of the kangoo is it's practicality , being a van with seats it has tons of room , for more room just fold the seats .

In the 2008 Gray interior of the first model was replaced by a more cream interior .

The 2008 kangoo is based on theRenault Kangoo Compact Concept