The Porsche Mission E is the internal designation for the first generation fully electric powered Porsche, which was unveiled at the 2015 Frankfurt Motor Show on 14 September. The Porsche is build at entirely new platform. The Porsche is designed by Ivo van Hulten. The car is still an concept car but Porsche has revealed that the Mission E would be built. The Porsche has over 600 HP. It goes from 0–100 km/h in 3.5 seconds and 0–200 km/h in 12 seconds. The projected top speed is over 250 km/h. Production is set to start in 2020.

The mission E takes a different type of design by Porsche.

The Porsche Mission E is the first fully electric car of Porsche. The Mission E is powered by 2 electric motors: one at the front axle and one at the back. All the four wheels are individual controlled by Porsche Torque vectoring system. The 2 electric motors produce more than 440 KW. The car has a system power of 800 V DC. The batteries can be charged by an inductive plate or with an conventional charger system. Porsche claims that with Porsche Turbo charging system the battery is loaded to 80% in just 15 minutes. 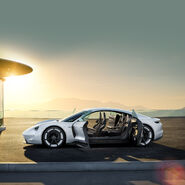 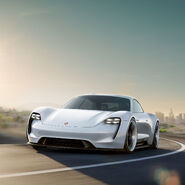