The Porsche Boxster Speedster is a convertible sports car released in late 1996 by German Automotive manufacturer Porsche. The Boxster has a mid-mounted engine, two doors, two seats, and a folding cloth roof. Throughout its production it has been Porsche's smallest and least expensive sports car model.

The Boxster's name plays on the words, 'boxer' (after its horizontally-opposed engine configuration, called the boxer engine which was patented by Karl Benz in 1896) and 'roadster'. Boxster production began at the former Porsche 928 facility at Stuttgart after the 928 was discontinued due to poor sales. Boxsters are also manufactured in Uusikaupunki, Finland by Valmet under contract to Porsche.

Engine tweaks are the only changes for the 2007 Boxster and Boxster S. 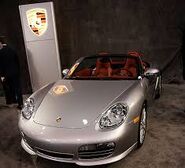 The Boxster is available in Base and S guises. The S model is more upscale, in features, performance and price.

The NHTSA has not conducted crash tests of the 2007 Boxster.

Porsche has no plans to release a hybrid model of the Boxster.

Like all Posches, the ignition key is mounted on the outboard side of the steering wheel. This tradition recalls the LeMans time-saving feature that gave Porsche's a slight advantage over the competition.

As a rule of thumb, the Porsche Boxster typically depreciates at 10% of it's value year on year

"It couldn't pull a greased stick out of a pig's bottom." Jeremy Clarkson, Top Gear

The third generation Boxster was introduced in 2012 under the 981 internal working code. In 2016, it received a facelift under the working code of 982 that saw some chassis modifications, cosmetic changes and a major shift in engines. The engine update consisted of the introduction of four-cylinder, single-turbo boxer engines instead of the six-cylinder naturally-aspirated engines used by the 981 Boxster family up to that point. As part of this strategy, Porsche reintroduced the 718 name in homage to the 4-cylinder Porsche 718 sports car from the 50s and 60s, with the Boxster becoming the 718 Boxster.

The third-generation Boxster was announced on 13 March 2012 at the Geneva Auto Show with sales starting early summer 2012. The new Boxster reflects the new design language from the 911 (991) and 918, and features new and revised engine and transmission specifications. Together with a new body, the type 981 Boxster features a new chassis; 40 per cent more torsionally rigid, the front track is 40mm wider, the rear 18mm wider and the wheelbase extended by 60mm, but with a small weight reduction of up to 35 kilograms (77 lb) compared to the previous type 987 Boxster.The standard Boxster is fitted with a new 2.7-litre flat-6 engines, and the Boxster S is fitted with the existing 3.4-litre engine but with revised performanùce. Both engines are equipped with a 6-speed manual gearbox and an optional 7-speed reworked PDK. Both manual and automatic models are available with several technical options including Porsche Torque Vectoring (PTV) and a Sport Chrono Package that includes active transmission mounts, and makes the PDK-equipped model even faster. Porsche claims that the new generation Boxster provides fuel savings of 15% over the outgoing model.The range was expanded in March 2014 with the addition of the GTS derivative, with slightly altered front and rear bumpers and an additional 15 bhp from the 3.4-litre engine.Porsche revealed the latest Spyder model in April 2015 at the New York Auto Show. The styling of the car is similar to the previous generation Spyder, continuing the twin hump rear deck and manually operated canvas top. It also shares some styling with the Cayman GT4, using the same front and rear fascia. The engine is also shared with the Cayman GT4, a 3.8l flat-6, making this the largest capacity and most powerful engine used in a Boxster with 276 kilowatts (370 bhp). It is also the lightest current Porsche, weighing 1,315 kilograms (2,899 lb). This was achieved through the use of aluminum doors and rear lid, the manually operated roof and unique light weight 20 inch wheels. The air conditioning and audio system are also removed, although can be added as no cost options. Braking is via larger brakes than used on the Boxster S, being 340mm front and 330mm rear units taken from the 911 Carrera S. It also shares from the GT4 a limited slip differential combined with Porsche Torque Vectoring and features a 30mm lower ride height. Additionally it also borrows the steering rack from the 911 Turbo S along with the same reduced diameter GT steering wheel as used in both the GT3 and GT4. The only gearbox available is a 6 speed manual. The Spyder has a base price of US$82,100.

The second generation of the Boxster is the 987 which made its debut at the 2004 Paris Motor Show alongside the 997 911. The car became available for model year 2005.

The appearance of the car remains very similar to the previous generation. The most obvious styling change is the headlights which moved towards a more classic round style, much like the current generation 911. There has also been a significant update to the intake vents on the sides of the car, which are now larger. Overall, the styling of the car has been updated to match that of its hard top stable mate, the Cayman. The base engine is a 2.7 L 176 kW (240 PS) flat-6, with the Boxster S getting a 3.2 L 206 kW (280 PS) engine. The 987 grneration boxster ended in 2011.

The styling of the Boxster is owed to former "Style Porsche" department head Harm Lagaay. His Boxster design study and the production Boxster stimulated a commercial turnaround for Porsche after several difficult years of falling sales. The first generation of the Boxster was the 986 whose visual appearance was heavily inspired by the Porsche Spyder and Speedster. The Boxster features two models; the standard model with a 200 bhp (149 kW), 2.5 L flat six cylinder engine (enlarged to 2.7 L and 225 bhp (168 kW) in later model years), and the model "S" with an enlarged 3.2 L engine producing 258 bhp (192 kW).

A unique styling feature on both the 986 and 987 is the automatically extending rear spoiler that extends at 75mph and retracts at 56mph, pushing down on the back end to increase steering control and stability. With styling reminiscent of the larger 911 (to the point where buyers of the 911 complained that their car looked too similar to the Boxster), the car has been popular both with car industry journalists and with buyers. It was Porsche's biggest volume seller from its introduction in model year 1997 until the company introduced the Cayenne SUV in model year 2003.

The ignition is located to the outboard side of the steering wheel, a Porsche tradition.

There is a parody version of the Boxster in 'The Sims Bustin' Out'. It's very similar to the Boxster but is named Spitzenfunken and is unlocked after a user sim gets married.

A silver Boxster appeared in a British sitcom, 'My Hero'.

In 1998, after a year of marketplace acceptance in the United States, the original Boxster was the recipient of many awards, including those listed:

The Boxster S (986s) was rated as one of the top ten Porsches of all time by Excellence magazine.