The Porsche 997 was a recent variant of the ubiquitous 911 - 997 being the factory type number for the car. The car was released in July 2004, and was tasked with bringing the 911 concept into the 21st Century, featuring many key revisions over the outgoing 996. Despite looking very similar to its predecessor, in truth the two share only the one common body panel - the roof. The polarising 'Fried Egg' headlights of the 996 have been binned in favour of circular items designed to revoke memories of both the original 911 from 1964 but also the 993 - one of the most revered 911 shapes in enthusiast circles. Inside, large changes have been made - with a brand new dashboard, shunning the curves of the 996 for a more upright and boxy shape, much like previous 911s. Much effort was put into build quality - and the 997's interior retains the 'hewn-from-rock' feel which has been key to the 911's success. The 997 was replaced by the 991.

Porsche believes that there is a 997 for everybody, and with a barely credulous 14 variants in the range, you cannot disagree. The Carrera and Carrera S coupes were launched first, available from July 2004. The range was boosted with four-wheel drive versions from November 2005, and again in 2006 with the release of the hyper-performance Turbo and stripped-out GT3. Most recent additions to the range are the four-wheel drive Targa models, the extreme GT3-RS and the Turbo Cabriolet - the flagship of the range.

Despite a recent release, Porsche have already planned a facelift for the 997, due out in 2009. The new 997 will feature new headlights and bumpers, direct injected powerplants and the availability of Porsche's own twin-clutch semi-automatic transmission, to rival Audi's DSG system. 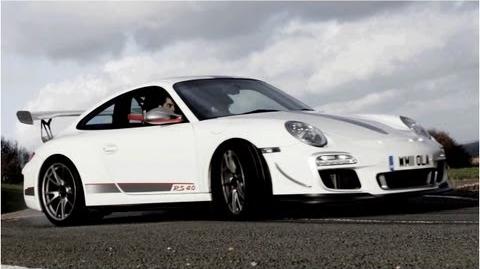 The 997 follows on from the 996, in that the two-wheel drive variants of the car are named simply 'Carrera' - although unlike the 996, two separate versions of the Carrera are available.

The 997 Carrera sits at the bottom of the range, and features a 3.6 litre variant of the ubiquitous flat-six powerplant, again water-cooled. The engine develops 325 bhp, enough for 0-62 mph in five seconds dead. Power is transmitted to the rear wheels via a six-speed manual gearbox, or a five-speed variant of the Tiptronic S sequential automatic - the 997's only automatic gearbox. The Carrera benefits from the 997's well-equipped and ergonomic interior, which features leather upholstery as standard, along with an in-dash screen.

The 997 Carrera S is the faster, more powerful, better equipped and more expensive Carrera variant. Fitted with a 3.8 litre engine which develops 355 bhp, the Carrera S marks the first 911 model in which Porsche has offered two different engine capacities within the one generation. Beating its 3.6 litre sibling to 62 mph by only 0.2 seconds, some would question the extra outlay required for that S badge. However, the Carrera S features generous standard equipment levels, such as 19 inch alloy wheels and sports suspension, lowering the car by 20 mm. Again, the Carrera S can be specified with either gearbox.

Released in November 2005 were the four-wheel drive Carrera models, available in both standard and S trim - named, surprise surprise, Carrera 4 and Carrera 4S. Power outputs remain constant, but the hardware required to drive the front pair of wheels adds weight (65kg to be precise) - hence both cars record a 0-62 mph dash 0.1 seconds slower than their two-wheel drive brethren. To enable drive to all four wheels, the Carrera 4 models employ a viscous-coupled centre differential, which can automatically alternate torque values applied across each axle, depending upon grip levels experienced. The system supplies a minimum of 5% of all drive to the front axle in all conditions - this can rise to 40% in extreme situations. Porsche Stability Management (PSM), which is essentially Porsche's traction control system, is allied to the four-wheel drive - and has been completely revamped from the two-wheel drive 997.

The all-wheel drive 997s run 10mm closer to the road, and 4S are supplied standard with Porsche Active Suspension Management (PASM), using which the driver can control suspension stiffness. Added to this, the rear wings are 44 mm wider than the two-wheel drive models.

The Carrera models are also available in Cabriolet drop-top guise, in both two- and four-wheel drive variants. Again, 0-62 mph times rise by a tangible 0.2 seconds over the tin-top versions, even though power outputs are stagnant from the Coupes. This is due to the extra weight carried by the roof itself, its electrical ancillaries and the structural stiffness added to the shell to prevent scuttle shake and chassis bending vibrations.

Ever since the mid-Seventies, a Targa 911 has been part of the range, and it was announced in 2006 that a 997 would make its way into the showrooms. With the 997 generation, the Targa continues its new look - with a full-length glass panel, which retracts at the pull of a switch.

The Targa is actually built from a Cabriolet bodyshell, with new roof bars incorporated to carry the glass roof and its mechanism. The Targa is reckoned to be the most practical 911 in the range, at least for luggage space - along with the cavernous boot under the hood, the rear windscreen is hinged like a hatchback - allowing easy access to the rear seats, which can fold flat creating a large, van-like space.

The Targa range consists of the Targa 4 and Targa 4S - it's the only model, with exception of the Turbo, to be sold in four-wheel drive guise only. Specifications and equipment levels are identical to the respective Carrera models, and performance remains the same as the Cabriolet models.

The homologation-special version of the 996-generation 911, the GT3, was supremely popular amongst both road and track driving enthusiasts, and it was with great excitement when Porsche announced that a GT3 variant of the 997 was to be released in the middle of 2006. The 997 GT3 would follow on where the 996 left off - a stripped-out and ultimately track-focussed car for the enthusiast.

Although identical in capacity and layout to the engine fitted to the Carrera, the 3.6 litre flat-six of the GT3 can trace its roots back to the Le Mans winning GT1 racer of 1998. The engine is hand-assembled at Porsche's Motorsport Department in Weissach, and features a number of improvements over its predecessor - namely in reduction in mass and mechanical loads, which would allow an increase in engine speeds and thus power. In reality, only crank case has been carried over from the 996 GT3 - everything else is new. The Porsche engineers have been meticulous to meet their briefs - for example, the forged pistons have been re-shaped and reduced in size by a single milimetre, which adds up to a weight saving of 30 grams alone, per engine. Weight and efficiency of every other component in the engine trumps that of its predecessor.

Such hard work on the engineers' part delivers great results - 415bhp is produced at 7,600 rpm, and 295 lbft of torque at 5,500 rpm. At 115.3 bhp per litre, the powerplant is the most powerful naturally-apirated production car engine in the world.

The engine is slotted into a lithe body - and although the shell is standard Carrera fare, the body addenda is rather different. The bumpers have been redesigned to improve airflow into the radiators, and a new aerodynamic package has been developed, optimised for track work. The 18-inch wheels are forged, which saves upon unsprung masses, and Porsche Active Suspension Management (PASM) is fitted as standard. The car rides lower than the Carrera too.

The GT3 is available in two trim levels - the Comfort and Clubsport. The Comfort is the normal GT3 affair - bucket seats, but with normal seat belts and no roll-cage. However, the Clubsport package, a no-cost option, is aimed towards track work, with a full rear roll-cage, carbon bucket seats from the Carrera GT supercar, red six-point harnesses and a fire-extinguisher all included.

The 997's predecessor took the GT3 concept further, with the more extreme GT3-RS, which proved hugely popular, selling out is limited production run in a matter of months. Porsche announced the 997 GT3-RS in late 2006, and it went into production in early 2007.

The RS badge is derived from Rennsport, the German for 'motor sport' - and as such, the GT3-RS is the most track-focussed 997 yet. Developed for the road by Porsche Motorsport, it is also fully prepared for competition use. Every detail is geared for racing, from the special suspension setup to weight-saving components in the gearbox, rear screen and carbon-fibre wing. The RS utilises the body shell from the Carrera 4 models, and is such 44 mm wider across the rear hips, giving the car a suitably different look to the GT3. Every GT3-RS is sold with a two-tone paint scheme, with colours such as Signal Orange and Signal Green, along with contrasting decals and wheels, designed to evoke the glory days of the RS.

The GT3-RS is fitted as standard with lower sports suspension with PASM, the Clubsport pack featuring carbon seats and a full rear rollcage and Porsche's innovative carbon-ceramic brake discs (PCCB). Unlike the 996 GT3-RS, the 997 version is not built to a limited production run, nor is it the 'run out' version for the GT3.

If the GT3-RS is extreme, the GT3-RSR goes one step further. The 997 GT3-RSR is the factory's racing car, built in compliance with the 2006 Le Mans GT2 regulations of the Automobile Club de l’Ouest (A. C. O.) as well as the regulations of the international automobile assembly FIA for Series Grand Touring Cars - this enables the car to be raced around the globe in a number of different series.

The 3.6 litre powerplant of the GT3 has been bored out to 3.8 litres, and power rises to 485 bhp. The GT3-RSR also has a lower centre of gravity, improved aerodynamics and a body structure which is 10% stiffer than the 996 GT3-RSR. The rear wings are flared to allow for a rear track which is 14 inches wider than the road version, enabling exceedingly high levels of grip.

The GT3-RSR was christened by the Manthey Racing outfit at the 2007 Spa-Francorchamps 24-hour race. Naturally, it finished first.

Turbocharging 911s has been a Porsche tradition ever since the 930 in 1974 - and the 997 continues the tradition with the most powerful and advanced 911 Turbo ever.

Incorporating the four-wheel drive powertrain as pioneered on the 993 and 996 with a forced-induction 3.6 litre flat-six, the 997 Turbo rockets from 0-62 mph in only 3.9 seconds, with a top speed of 193 mph. The performance is incredible - the 60-90 mph sprint (considered to be overtaking speeds) is completed in a second.

The stunning performance is due to some engineering trickery under the bonnet. Previous 911 Turbos have made use of twin turbochargers - but these have been relatively simple single-stage turbochargers. The 997 Turbo utilises two Variable Turbine Geometry (VTG) units, which means that small vanes move constantly within the turbo unit, thus controlling boost pressure - this culminates in less lag and a less dangerous sharp boost further up the rev range. Although the technology is not new - it was first used in gasoline applications by Shelby in his Dodge-based 1989 CSX-VNT, and later by Peugeot. Diesel truck engines have been using this technology for a number of years since the early 1990's. The VTG system endows the flat-six with 480 bhp.

The Turbo is differentiated, bodily, by wider hips with in-built air vents, along with a more aggresive bodykit. The forged alloy wheels are of a design unique to this model, and the 'Tea Tray' rear wing makes a comeback for the 21st Century.

In May 2007, Porsche announced the release of the 997 Turbo Cabriolet, which would be the factory's most powerful and quickest convertible yet. Under the drop-top skin remains all the hardware of the tin-top - but the extra weight harms 0-62 mph times by a measly 0.1 seconds. 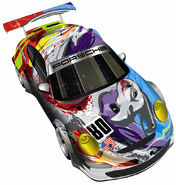