Porsche made an initial announcement of the new program on 11 June 2012,[3] with Timo Bernhard and Romain Dumas named as the initial development and race drivers of the car. Exactly one year after its announcement, the first test chassis completed its initial rollout.[4] The engine of the 919 utilizes a 2-litre V4 turbocharged gasoline engine with direct injection and two energy recuperation systems, with new signing, Australian Formula One driver Mark Webber, testing the car at Algarve in Portugal.[5][6] The first public showing of the car was on 14 December 2013.[2] The 919 uses a Lithium-ion battery hybrid system, and can store up to 6 MJ of energy (1.7 KWh) per lap of Le Mans. The car will also have an exhaust-energy recovery system that runs through a turbine in the exhaust.[7]

The 919 Hybrid made its competitive debut at the 2014 6 Hours of Silverstone at the Silverstone Circuit. The No. 20 entry of Timo Bernhard, Brendon Hartley and Mark Webber finished third behind the two Toyota TS040 Hybrids, while the No. 14 entry of Romain Dumas, Neel Jani and Marc Lieb was forced out of the race after thirty laps.[8]

At the 2014 24 Hours of Le Mans, the No. 20 entry, driven by Mark Webber at the time, closed to within one minute of the leading No. 1 Audi R18 e-tron quattro with an hour and a half of the race remaining when the car suffered a broken anti-roll bar. Before the hour was out, Marc Lieb was forced to pit the No. 14 entry with the same issue. Car No. 14 returned to the circuit to complete a ceremonial lap at the end of the race and was classified eleventh overall, but car No. 20 was unable to take to the circuit and was not officially classified as finishing, despite having completed 90% of the winner's race distance.

The 919 Hybrid is a new car for its second season with approximately 85%–90% new parts while finally bringing the car's empty weight (no driver, no fuel) to the 870 kg minimum;[9] it has also moved from the 6MJ subclass to the 8MJ subclass. Porsche have stated that they will be able to fully utilise this extra battery capacity for Circuit de la Sarthe although it might struggle on shorter circuits.[10] The 919 achieved pole positions in Spa and Silverstone before finally picking up a pole and win at the 24 Hours of Le Mans. 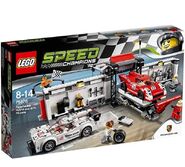