Autopedia
Register
Don't have an account?
Sign In
Advertisement
in: Article stubs, Pages with the First Anniversary Infobox Upgrade, Porsche,
and 8 more 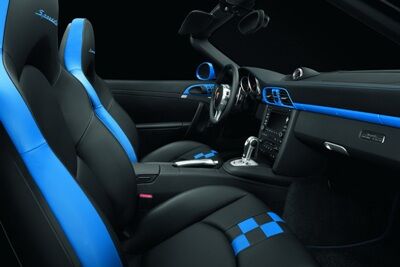 In 2011, Porsche made a new 911 Speedster in a limited series of only 356, the production number coming from the iconic car of the 1950s. It was the third 911 Speedster made, the other two being from the 930 and 964 generations. The Speedster was powered by the same engine of the Carrera GTS, and produced 408 horsepower (304 kW). It accelerated from 0 to 60 mph (97 km/h) in 4.2 seconds and reached a top speed of around 190 mph (310 km/h). Only two colours were offered, Pure Blue (which was developed specifically for the Speedster) and Carrara White. (Paint To Sample versions were produced in very limited numbers).

The Speedster featured a windscreen 70mm shorter than the standard 997 cabrio while maintaining the same rake angle. 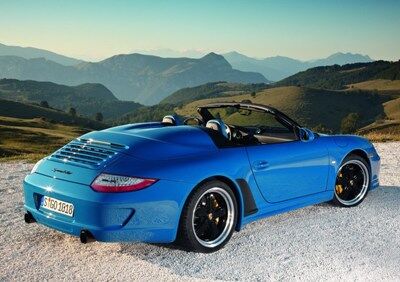 The Speedster model, was a variant of the 993, with a lowered roof, and a redesigned interior.

In contrast to the G-model and the 964, Porsche never officially released a 993 Speedster. However, two were built by the factory: a dark green Speedster equipped with Tiptronic S and 17-inch (430 mm) wheels for Ferdinand Alexander Porsche (for his 60th anniversary) in 1995 and another wide-body, silver Speedster with manual transmission and 18-inch (460 mm) wheels for American TV star Jerry Seinfeld in 1998. The Seinfeld speedster was originally delivered as either a cabriolet or targa model and later sent back to the factory "Exclusive" department to be "rebuilt" as a speedster.

There were two distinct incarnations of the air-cooled 911 Speedster. The first was the 1989 model year Speedster. Shown at the 1988 Frankfurt autoshow beside the upcoming Carrera 4, the 1989 Speedster actually shared more in common with the 930 turbo than with the upcoming 964 generation 911s, causing it to be looked upon, in retrospect, as a much inferior "driver's car" to the later 1994 Speedster. More than three quarters (641) of the 800 built had the "Turbo look" wide-body option.

The 1994 Porsche 911 Speedster was available either in standard or lightweight trim called “clubsport." Unlike the 1989 model, the 1994 Speedster was based on the new Carrera 2 platform and was not initially available with the "Turbo look" wide-body style. The 1994 Speedster was designed to be a more focused "driver's car" and served as a hybrid between a 964 Carrera 2 Cabriolet and a 964 RS. While it featured a softer suspension set up than the 964 RS, it offered almost none of the comforts of a normal 964 Carrera 2 Cabriolet, though power windows were standard and it was available with air conditioning and a stereo. Porsche planned to build 3000 examples of the 1994 Speedsters in 1992, but only 936 examples were built and sold during the two years of production. Once again, the United States was the most important market with 427 Speedsters heading Stateside. Right hand drive versions were exceptionally rare this time, with only 14 cars having the steering wheel on the ‘proper’ side compared to 139 examples in right hand drive of the pre-964 911 Speedster. In addition, 20 special examples were finished at Porsche Exclusive's workshop at Werk 1 (Factory 1) with the optional “Turbo look” wide-bodies.