In 2016, Porsche unveiled a limited production 911 R. It has an overall weight of 1,370 kilograms, a high-revving 4.0 L six-cylinder naturally aspirated engine from the 991 GT3 RS, and a six-speed manual transmission, while an air conditioning system and an audio system are removable options to save weight.

Revealed at the 2016 Geneva Motor Show on March 1, the 911 R shares most of its underpinnings with the GT3 RS, but removes the rollcage, rear wing, and associated bodywork for a weight savings of 50 kg. The R comes only with a 6-speed manual transmission, and has a top speed of 201 mph (323 km/h) due to a lower drag coefficient compared to the GT3 RS. It also offers additional options for a lighter flywheel and removal of the air conditioning and audio systems. Production will be limited to 991 examples, starting as a 2017 model. 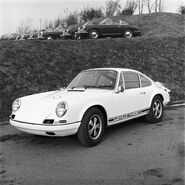