Autopedia
Register
Don't have an account?
Sign In
Advertisement
in: Pages with the First Anniversary Infobox Upgrade, Porsche vehicles, Porsche,
and 8 more

The Porsche 911 GT3 was introduced in 1999 as a high performance version of Porsche's first water-cooled version of the 911, the 996, to continue the quarter-century tradition of low-weight RS models that ended with the 993 RS. The GT3, named after the FIA GT class it was intended for, did not use the rather simple engine of the regular production versions of the 996, but a naturally-aspirated version of the turbo-charged Porsche 962 and Porsche 911 GT1 race cars. Later, the turbo-charged Porsche 911 GT2 was added to the maker's lineup, but unlike its predecessor 993 GT2, did not fit into GT racing regulations. The racing versions of the GT3 have won several major 24h races outright, and mainly dominated their class at Le Mans.

-"The Turbo may look better on paper, but it’s hard to match the feel and precision of Porsche’s naturally aspirated 911s, especially considering the GT3’s" -Car and Driver 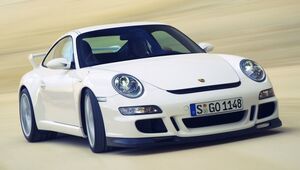 Porsche released its facelifted 991.2 GT3 at the 2017 Geneva Motor Show in 2017. Changes made from the 991 are the engine and the spoiler, which is 20% taller. The engine unit is a "Carbon Copy" of the 911RSR engine, producing 500 horsepower. Another change from the 991 is the introduction of a manual transmission option, along with the PDK version. The 991.2 GT3 lapped the Nürburgring in 7:12.7 seconds.

Porsche introduced the 991 GT3 at the Geneva Motor Show in 2013. The 991 GT3 features a new 3.8 litre direct fuel injection (DFI) flat-six engine developing 475 hp (354 kW; 482 PS) at 8,250 rpm, a Porsche Doppelkupplung (PDK) double-clutch gearbox and rear-wheel steering. The engine is based on the unit fitted in the 991 Carrera S, but shares only a few common parts. All other components, particularly the crankshaft and valve train, were specially adapted or developed for the 991 GT3. For example, the 991 GT3's engine uses titanium connecting rods attached to forged piston, in order to allow the engine to reach up to 9,000 rpm. The dual-clutch gearbox is another feature specially developed for the 991 GT3, based on sequential manual transmissions used in racing cars.

After a number of engine failures, it was discovered that the supplier of the connecting rod bolts had made a production error in the alloy of the bolt. Subsequently, all 785 of the GT3s that had been produced up to that point were recalled to the dealership organisations and fitted with new engines, and all owners were issued with an extra year's warranty.

In 2009, Porsche launched the 2nd Generation 997 GT3 (commonly now known as the 997.2 GT3), with an enlarged 3.8 litre engine producing 435 PS (320 kW). It also featured a number of new options including dynamic engine mounts and a pneumatically lifting front axle to compensate for the low ground clearance. The rear spoiler was also modified along with other parts of the bodywork. Deliveries in Europe commenced in October the same year. A total of 657 units were sold in the United States and 58 units in Canada.

In February 2006, Porsche revealed the first generation 997 GT3, commonly now known as the 997.1 GT3. In addition to a new 415 PS (305 kW) 3.6 litreflat-six engine, the vehicle featured "zero lift" aerodynamics, meaning the car creates only aerodynamic downforce and no grip-diminishing "lift" upwards and away from the road surface. The vehicle made use of a modified, track oriented version of Porsche's active PASM suspension making it the first of Porsche's RS or GT3 versions to feature an electronically adjustable suspension system. Also available was a navigation system and Porsche's "sports chrono" gauge package. The car went to sale in summer of 2006 and had a starting price of $106,000 USD. A total of 917 units were sold in the United States and 46 units in Canada.

Porsche made significant updates to the GT3 for 2004 (the first year the car was offered to US customers), using the 2002 996 facelift including headlights that were differentiated from the Porsche Boxster. The 2004 version is commonly known as the 996.2 GT3. Horsepower was raised to 381 PS (280 kW) and torque to 284 lb·ft (385 N·m), 80% of which was available from 2,000 rpm. The braking setup was upgraded, now featuring 6-piston calipers on the front (rears remained 4-piston), and the Porsche Ceramic Composite Brake system was offered as an option.

Porsche's official test-driver Walter Röhrl completed the NürburgringNordschleife with the 996 GT3 in 7 minutes 56 seconds, a feat which was used by Porsche to promote the car.

The "GT3" nameplate was introduced in 1999 as part of the first generation of the Porsche 996 model range (commonly known as 996.1). As with Porsche's previous 911 RS models, the 996 GT3 was focused on racing, and so was devoid of items that added unnecessary weight to the car. Sound deadening was almost completely removed, as were the rear seats, rear loud speakers, sunroof, and air conditioning, although automatic air conditioning and CD/radio became no-cost optional add-ons.

The engine of the 996 GT3 set it apart from most of the other Porsche 996 models, although it shared the same basic design of the standard so-called "integrated dry sump" flat-six engine. The engine is naturally aspirated and based on the unit used in the Porsche 962 and Porsche 911 GT1 race cars. That engine was known as the 'Mezger' engine, after its designer Hans Mezger. The engine uses the original air-cooled 911's versatile dry-sump crankcase, with an external oil reservoir. The 996 GT3 has 360 PS (265 kW; 355 hp), compared to the 300 PS (221 kW; 296 hp) of the regular Porsche 996. In GT3 configuration, this so-called "split" crankcase (meaning the parting line of crankcase is on the crankshaft centreline) uses, instead of a fan and finnedcylinders, separate water jackets added onto each side of the crankcase to cool banks of three cylinders with water pumped through a radiator. Thus, the GT3 engine is very similar to the completely water-cooled Porsche 962 racing car's engine, which is based on the same crankcase. The 962 differs, however, by using six individual cylinder heads while the GT1/GT3, like the air and water-cooled Porsche 959, uses two cylinder heads, each covering a bank of three cylinders. The GT3 engine could thus also be thought of as similar to a 959 engine, but with water-cooled cylinders. Up to early model year 2004 996 GT3 production, the basic casting used for the crankcase of the GT3 was the same as the air-cooled engine. The "964" casting number was visible on the bottom of the crankcase, and on areas normally machined in air-cooled applications, but not in water-cooled ones. The crankcase casting was changed in mid-2004 to a "996" casting number crankcase to eliminate these external air-cooled remnants, but internally it was the same.

Because the 911 air-cooled crankcase uses the Porsche 356 engine to transmission mounting flange configuration, the 996 GT3 used a manual gearbox also of air-cooled 911 heritage. This gearbox has interchangeable gear ratios and is more durable making it more suitable for racing than the standard 911 type 996 gearbox.

Porsche offered a no-cost option for the GT3 called the 'Clubsport' package. This option replaced the standard electrically adjustable leather front seats with manually adjustable racing buckets finished in fire-retardant fabric, single mass flywheel, bolt-in half-roll cage, 6-point drivers racing harness (also replacing the standard side airbags), fire extinguisher (mounted in the front passenger footwell) and preparation for a battery master switch. The Clubsport option was never offered to US customers, ostensibly due to the additional DOT crash testing that would have been required to allow US sales.