The Porsche 718 was a racing car, built by Porsche from 1958 until 1962. The 718 followed on from the success enjoyed by the Porsche 550, and was similar in concept - lightweight, mid-engined, flawlessly designed and easy to maintain. The 718 would bring Porsche's first win at Sebring, at the 1960 12 Hours race, and multiple success in the Targa Florio, along with countless national hillclimb, endurance and sports car championships worldwide.

Developed By Porsche, For Porsche

The Type 718 used many of the mechanics wielded so successfully by the 550 before it - namely the Type 547 engine, in 1.5 litre displacement with over-head camshafts. This engine is recognised to be the first truely developed by Porsche for use in one of their own automobiles. The relatively small capacity allowed the 718 to enter into the 'small sports car' class, as defined by the European motorsports governing body, the FIA.

Erwin Komenda was again employed to design the car, and the end product was a streamlined and compact shape - which was perfect for the giant-killing reputation the car would gain throughout its lifetime. The aluminium skin sat upon a tubular spaceframe chassis (again, a first for Porsche), into which was placed the engine. Drive went to the rear wheels via a brand new five-speed manual gearbox.

The 718 remained unmodified until rule changes in 1960 necessitated the enlargement of the engine to 1600 cc - and so the 718 RS60 was born. Over the 718, improvements included larger windshield, a "functional" top and a regulation trunk in the tail, behind the four-cam engine which now produced 160 hp. The 718 RS60 proved incredibly successful, with the factory entry driven by Olivier Gendebien and Hans Herrmann winning outright at the 12 Hours of Sebring, 1960, with their team-mates finishing second. The RS60, in the hands of Jo Bonnier and Hans Herrmann, also won the 44th running of the Sicilian epic, the Targa Florio.

The RS61 was again updated in 1961, and renamed the RS61. Annual updates continued until the end of the car's life.

Although originally a road-legal sportscar, with two seats and the steering wheel on the left, Porsche created a single seater version of the 718, named the 718/2. Initially a special order by Grand Prix driver Jean Behra, the first single seater 718 was entered into a Formula 2 championship. It was based upon the 718RSK, utilising its engine and a great deal of its mechanical components, but Behra deemed it too slow, and created another. Despite this, he went on to win the 1958 Formula 2 race at Reims, in France.

This newer single seater retained the 718's engine, but allied it to a brand-new tubular spaceframe chassis. Most of the work was conducted by ex-Maserati engineer, Valerio Colotti, in Modena, and the car raced for the first time at the 1959 Monaco Grand Prix, against the faster Formula 1 cars. Unfortunately, the car was involved in a collision with another competitor, and forced to retire. However, Hans Herrmann took to the wheel at Reims, and finished a close second to Stirling Moss in the Cooper. The next race would occur at Germany's Avus track, with Behra to take the wheel of his Porsche - but the day before the race, he was killed driving a 718 in a Sportscar race, and the car didn't turn another wheel. Some time later, American driver Vic Meinhardt bought the car, and raced it at amatuer level in the USA.

When Formula One's rules changed in 1961, Porsche realised that it could enter the earlier single seater into the championship. However, the results were varied, and the 718/2 was replaced by the 804 for Porsche's F1 efforts. 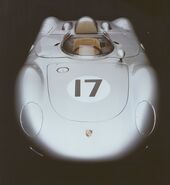