The Pontiac Sunbird were twins with the Chevrolet Cavalier. Until it was replaced by the Pontiac Sunfire after 1994.

No current Generation. Sunbirds only had 2 generation and where replaced with the Sunfire in 1995. 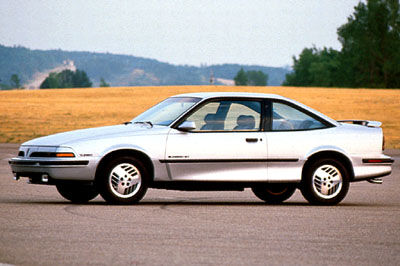 The Pontiac Sunbird started out as a corporate twin to the Chevrolet Monza (and also included the Buick Skyhawk and Oldsmobile Starfire), and ultimately replaced the Astre as Pontiac's sporty 2+2 coupe. While the Monza, Skyhawk and Starfire were introduced in 1975, the Sunbird didn't debut until a year later in 1976. The Sunbird shared all of the Monza's bodystyles, but unlike the Monza, the Sunbird didn't offer different nose and tail treatments to differentiate its hatchback and notchback bodystyles. For 1976, the Sunbird was available only as a notchback - the hatchback wouldn't debut until 1977. The Sunbird would also be available as a 3-door wagon in 1978, but it was simply the old Astre wagon with a Sunbird nameplate on it.

All Sunbirds (except the wagon) had quad rectangular headlights with the parking lights beside the headlights and tri-colored taillights in the rear. Grille designs changed over the years - the 1977 models would have a honeycomb design, 78s would have vertical slats, 79s had a single horizontal divider on both sides, and 80s had chrome horizontal bars. Sporty Formula models were available on the hatchback (much like Chevrolet's Monza Spyder) until 1980. The 1976 models had the Vega 2.3L I4 engine with 4-speed manual or 3-speed automatic transmission, with the Buick-built 3.8L 231 cid V6 optional. 1977s discarded the nasty Vega 2.3 engine for the new "Iron Duke" 2.5L I4 engine, with the 3.8 still being available. The Chevy-built 5.0L 305 cid V8 engine became optional on the 1978 and 1979 models. In 1980, the V8 was dropped, and speedometers now read up to 85 MPH instead of 80 MPH.

The Sunbird would be dropped after calendar year 1980 to be replaced by the new front-wheel-drive J-car in 1982, initially named J2000. The Sunbird name would reappear again in 1984 and eventually supplant the 2000 moniker in 1985.

See the Chevrolet Monza entry for more comments about the Pontiac Sunbird.

Retrieved from "https://automobile.fandom.com/wiki/Pontiac_Sunbird?oldid=97943"
Community content is available under CC-BY-SA unless otherwise noted.