The Pagani Zonda is a mid-engined sports car produced by Pagani in Italy. It debuted in 1999 and continues through the present, with production proceeding at roughly 10 cars per year. As of June 2009, 106 Zondas had been built, considering also test mules. Both 2-seat coupe and convertible versions have been produced. Construction is mainly of carbon fiber.

Some of the early Zonda engineering was done by Formula One champion Juan Manuel Fangio. The car was originally to be named the "Fangio F1" after him, but following his death in 1995, it was renamed for an air current above Argentina.

Just five of the original 6.0 L Zondas were built, though it was still available in 2002 when the C12 S debuted. One was used for crash testing, while another was a demonstrator and show car. The remainder were delivered to customers during the next three years, priced at US$320,000.

The Zonda S features an elongated nose, flaps at the rear for improved aerodynamics, and new light clusters and exhausts. Only fifteen 7.0 L Zonda S cars were produced.

In February 2003 the UK automotive magazine EVO attempted a top speed run on the Autobahn in which the car top out at 198 mph (319 km/h), 10 mph (16 km/h) off the mark of its claimed top speed of 209 mph (336 km/h). Company representatives at Pagani's factory claimed this was the result of the car being in the setting for maximum down force, something that would drop its top speed to around 200 mph (320 km/h). However, the EVO article claimed that aerodynamic parts, specifically ones which created drag were in fact removed during the run, bringing Pagani's claims into question.

n 2003 Pagani presented the Zonda Roadster, a roadster version of the Zonda S 7.3 with production limited to 40 examples, carrying the same components as the coupe, Pagani promised no loss of performance, a claim supported by the minimal weight gain of just 30 kg.

Production of the Zonda F will be limited to 25 cars, not US compatible. The next model (codenamed C9), will be fully EPA/DOT compatible.

The Zonda Roadster F debuted at the 2006 Geneva show. It is similar to the coupe, but with a removable carbon fibre roof and canvas side curtains weighing just 5 kilograms (11 lb). Production of the Roadster F is suggested at 25 units.

The Roadster F is able to maintain chassis rigidity without any gain in curb weight by eschewing conventional thinking by not strengthening the sills - a process which would have needed more than 35 kilograms (77 lb) of reinforcement. Pagani instead uses racing car thinking, materials and construction techniques, strengthening the firewall structure of the chassis tub together with billet alloy braces that connect the points where the roof rails would have joined. The windscreen is also strengthened for safety reasons. These techniques enable the Roadster to have virtually the same weight as the coupe, 1,230 kilograms (2,700 lb).[4]

The Zonda Roadster F Clubsport was tested by Top Gear's The Stig and achieved a lap time around their test track of 1:17.8, beating the Bugatti Veyron 16.4 tested during the same episode, but lost in a quarter mile drag race against the Veyron by nearly 2.5 seconds.

The final Zonda in its current form is a combination of the Zonda F and Zonda R to create a road-going track-day car.

Built at the repeated request of the Hong Kong–based Pagani dealer, SPS Automotive Performance (in fact, initially it had to be called Zonda SPS), only five will be built at the cost of £1 million, with deliveries expected by June 2009 for all five cars.

The differences over other road-going Zondas are the new 6-speed sequential gearbox, resulting in shifts now taking less than 100 milliseconds, dropping 0–62 mph down to 3.4 seconds, the Cinque also has a revised form of carbon fibre called "carbo-titanium" which incorporates titanium to increase strength and rigidity. Suspension makes use of magnesium and titanium components, and the engine's power has been increased to 678 bhp (506 kW). Revised bodywork, which includes a longer front splitter, new sideskirts, rear diffuser, bumper canards and a flatter underside as well as a roof-mounted air intake scoop, now creates 750 kg (1,653 lb) of downforce at 300 km/h (186 mph), allowing the Cinque to generate 1.45 G of cornering force.

The Roadster will have specs as the Cinque Coupé, and will likely maintain the same rigidity or more, as it was for the Roadster F and F Coupé. Like the Coupé from which it derives, only 5 units are built, with a price of £1.3-million/US$2 million plus local taxes.

And, without considering other One Offs, like the Tricolore, the PS and other special Zondas which will be built, makes this and the coupè the rarest Zondas. It goes from 0 to 60 mph (97 km/h) in only 3.4 seconds and it has a top speed of 217 mph (349 km/h).

The final mass-produced Zonda, originally conceived as a one-off, there will now be 3 Tricolore's built. It was built as a tribute to the country's aerobatic team. It carries a lot of the body from the Zonda Cinque. The car is unpainted except for a clear blue lacquer and red, white and green stripes that run up from the nose along the top of the car's surface. The three Tricolore's will be priced at 1.2 Million pounds. It's also 6 mph (9.7 km/h) faster than a standard Zonda at 220 mph (350 km/h).

A one-off custom built from the Zonda F.

A special one-off built for an Al-Thani, a member of the Royal family of Qatar, famous for his turquoise car collection. Originally the car was a Zonda F Roadster that was crashed in Qatar and was sent back to the factory to be rebuilt.[1] The car is specced like a Cinque with the new carbo-titanium chassis. It also has the LEDs on the front of the car like the Tricolore. Unique to this car are the darkened rear lights and the rear exhaust (the four pipes are shorter than standard). Also the black wheels with turquoise wheel-striping, and the dual-tone diffuser are real eye-catchers, together with lots of other black accents like the collector of the exhaust tail pipes.

Another one-off estimated to be worth 1.5 million euros with a two-tone black and yellow colour scheme with a custom interior, fitted with sport bucket seats.

The Zonda HH is a special one-off edition, in Monterey Blue, that features the engine from the Cinque and most of the bodywork from the Zonda F Roadster. The HH was commissioned by Danish programmer David Heinemeier Hansson.

The Zonda 750 was another special one-off edition Zonda for a member of the Al-Thani family. However the order for it was canceled due to a disagreement between the proposed owner and Pagani.[2] The 750 is mainly based on the Cinque but also features several custom parts. It was expected that it would be finished in a Purple colour.

A one-off special that was commissioned by Peter Saywell. The car is the only one with all four exhaust pipes placed in a row instead of a circle.

A one-off special of the Zonda roadster was commissioned in 2010 to commemorate the end of the Zonda F production, it was finished in bare carbon and received upgraded horsepower.

The Zonda C12 S Monza debuted at the 2004 Paris Motor Show as a track-day version of the Zonda for private use. Borrowing its appearance cues from the Zonda GR, the Monza included many features which could also be applied to other Zonda models. A dry sump engine tuned to 637 PS (more than 440 kW) was used, and the cooling was improved. Modified aerodynamics, including a different wing and front diffuser, allowed greater speed, as did optimized gearing. The car was lighter, with polycarbonate side windows, and an unmuffled exhaust is fitted. The revised interior includes different pedals, steering wheel, and seats, as well as a reinforced roll cage. Larger brakes and a stiffer suspension also improve performance. Finally, an external fire extinguisher is included for safety.

The Zonda R debuted at the Geneva Motor Show 2007, using the 6.0 litre V12 engine sourced from the race version of the Mercedes-Benz CLK-GTR.[3] The Zonda R's competition lies with track-biased cars such as the Ferrari FXX and Maserati MC12 Corsa rather than the original Zonda's road competitors as it is not road-homologated.

Despite sharing much of the Zonda's shape, the R is almost entirely new, sharing only 10% of the Zonda F's components. It has been obliquely suggested by Horacio Pagani that this car is a testbed chassis for certain components of the Zonda's replacement (in the same vein as the Ferrari 288 GTO Evoluzione and the successive F40) and that the Zonda R accurately reflects some of the Zonda's successor's features. The Pagani Zonda R ran a power lap on Top Gear test track and finished with a time of 1:08.5. It is unable to be classified as a road car making it third fastest of non-qualifying cars behind the Renault R24 Formula One car and the Lotus Type 125 .

The central carbon chassis incorporates a roll cage and a rubber racing fuel cell with 4 fuel pumps and quick refuel filler cap, similar to GT race cars. The wheelbase has been increased by 47 mm to increase stability. The front and rear subframes are brand-new, built to accommodate new suspension geometry, and produced in Avional. The slick-shod wheels are new forged-magnesium center-lock models, which in conjunction with on-board pneumatic airjacks (again, like the FXX) allow rapid change of the entire wheel assemblies.

The car senses, displays and logs information about the amount of downforce that is generated at each wheel at all times. It is thought that this system will enable owners to adjust set-up according to track conditions and to improve their cornering technique.

In addition to the wheelbase increase (47 mm), overall length has increased by 394 mm and track by 50 mm. The bodywork and aerodynamics have been altered to offer maximum downforce, featuring a longer front bonnet with flaps, a closed underbody and a new rear overhang with adjustable rear wing and race-derived diffuser. These are intended to translate into increased aerodynamic efficiency and downforce for maximum cornering speed. It is also noted that the car's new rear bodywork is minimal in the extreme, being composed mostly of vent. This is thought to be symptomatic of the need to keep the engine cool enough, even under hard track use. Again, this is similar to the gutted bodywork of the Ferrari FXX Evoluzione.

Output has increased to 740 bhp at 8500 rpm and 525 lb-ft of torque. A lightweight carbon fibre high performance intake system, racing multiple disc centered clutch and Formula One-style exhaust system, hydroformed in Inconel 625 and ceramic coated for optimal heat dissipation, have been added. The engine is combined with a 6-speed transverse-mounted manual sequential synchronized gearbox. Engine was built by Mercedes-AMG.

The car's interior is spartan reflecting the car's racetrack aspirations and intended home, and features bespoke seats, customized to the driver to offer maximum support. As before, the Digitek instrumentation provides essential information and the sophisticated telemetry allows a variety of sensors to monitor numerous aspects of the car.

Development of the Zonda GR started in December 2002. At this stage the Zonda was nearly four years old, but had yet to be entered in major motorsports. Tom Weickardt, owner of American Viperacing, Toine Hezemans, owner of Carsport Holland, and Paul Kumpen, owner of GLPK, created a new company, Carsport Zonda, to build a racing version. They secured exclusive rights to develop, build and sell competition Zondas from Horacio Pagani, and the first GR was completed at Carsport's facility in Modena within months.

The Zonda GR is based on the Zonda S. It was built on the same carbon fiber chassis, with tube frames in front and back. The bodywork was modified to include front and rear diffusers and louvers for improved aerodynamics. The car was 2 meters (6.6 ft) wide, in accordance with the regulations of the FIA and ACO. The car's weight was reduced to 1,100 kilograms (2,400 lb), and a new suspension was designed. New wheels and brakes were also specified. The engine was equipped with an enlarged radiator, and the engine and gearbox also have new oil coolers. 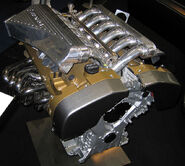