The RB26DETT engine is a 2.6L Inline-6 engine manufactured by Nissan, for use primarily in the 1989-2002 Nissan Skyline GT-R. The RB26DETT engine block is made from cast iron, and the cylinder head is made from aluminium. The cylinder head contains 24 valves (4 valves per cylinder), and uses a dual overhead camshaft setup. The intake of the RB26DETT varies from other RB-series motors in that it has six individual throttle bodies instead of a single throttle body. The engine also uses a parallel twin-turbo system. The turbo system is arranged so that the front turbo is powered by the front 3 cylinders, and the rear turbo is powered by the rear 3 cylinders. The RB26DETT uses a pair of T28-type ceramic turbochargers that are set by the wastegates to limit boost pressure to 10 psi, although the Skyline GT-R has a built in boost restrictor to keep boost under 14 psi.

There is a common oiling problem with the pre-1992 R32 RB26 motors, as the surface where the crankshaft meets the oil pump was machined too small, eventually leading to oil pump failure at high rpm. This issue was resolved in later versions of the RB26. Aftermarket performance parts makers also make oil pump extension drives to rectify this problem.

Originally the R32 GT-R was planned to have a 2.4L RB24DETT, and compete in the 4000 cc class (in Group A rules, the displacement is multiplied by 1.7 if the engine is turbocharged). This was when Nismo was going through the process of designing the R32 GT-R to be a Group A race car. But when the engineers added the AWD system, it would make the car heavy and less competitive. Nismo made the decision to make the engine a 2.6L twin turbo, and compete in the 4500 cc class, resulting in the RB26DETT known today.

The RB26DETT was used in the following cars:

The RB26DETT N1 is a modified version of the RB26DETT engine, developed by Nismo (Nissan Motorsports) for Group A and Group N motorsport. Nismo found that the standard RB26DETT engine required too much maintenance for use in a Group-A or Group-N race car and subsequently designed the N1 block. This was first used in Bathurst Australia. Nismo balanced the crankshaft to a higher specification than stock, as the RB26DETT engine experiences vibrations between 7000 and 8000 rpm. The engine also received improved water and oil channels within the engine block. The pistons and top piston rings were also upgraded to 1.2 mm. The N1 engine also has upgraded camshafts and upgraded turbochargers.

The biggest difference between the turbochargers used in the N1 engine, and the standard RB26DETT engine, is that the turbine wheels in the turbocharger are made from steel, rather than the ceramic used for the standard RB26DETT turbochargers. The ceramic turbine wheels are found to be very unreliable when used at high rotational speeds inducing higher centrifugal forces (such as when the turbochargers are used at a higher boost pressure than stock). With the advances in manufacturing technology such as sealing and material processes, the N1 engine is theoretically said to be able to produce in excess of 1,900 bhp (1,400 kW).

The Nismo RB26DETT N1 engine block uses an 86 mm bore which can be bored up to either 87 mm or 88& mm. The N1 block is stamped with an identification mark of 24U, or 25U, whereas the standard RB26DETT block is marked with 05U. The RB26DETT N1 block is compatible with all GT-R engine bays.

Only two R32 GT-R Bathurst cars were stripped after the competition. Parts were shipped back to Japan where it's believed some were sold to private parties in New Zealand and Australia. 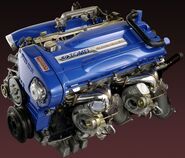 Retrieved from "https://automobile.fandom.com/wiki/Nissan_RB26_engine?oldid=73366"
Community content is available under CC-BY-SA unless otherwise noted.