The Nissan Quest is a minivan produced by Nissan Motor Corporation from 1993 to 2016. There have been three generations of this model. The first-generation Quest was a collaboration with Ford, which produced the mechanically identical and cosmetically similar Mercury Villager. The vans debuted at the 1992 North American International Auto Show in Detroit.

The Quest is distinguishable by a grille and headlights that are slightly shorter top to bottom than those on the Villager. Both vehicles were initially powered by the 3.0-liter Nissan VG30E until 1999, when the Quest received 3.3-liter version of the same engine. The Quest received a complete redesign for 2004. The current model is built on the FF-L platform, which it shares with the Altima, Maxima, and Murano. It also shares the award-winning 3.5-liter VQ engine with those cars.

Quest concept car
Add a photo to this gallery

Though it remains on the same platform introduced in 2004, the Nissan Quest receives some updates for the 2007 model year. The front fascia, grill, and taillight design have all been redone, and accents such as new wheels have been added. Inside, a number of options have been made available, and the dashboard and instrument panel have undergone a redesign as well.

Adds to or replaces 3.5 features with:

Adds to or replaces S features with:

Adds to or replaces SL features with:

Today's actual prices for the Nissan Quest can be found at CarsDirect.

The 2004 model of the Quest received an all-around Green rating from Automotive Information Systems, indicating minimal problems in all categories. These include Engine, Transmission & Driveline, Brakes, and Accessories, among others.

The 2007 Quest performed extremely well in safety tests carried out by the NHTSA. In tests for rollover, it received a 4-Star rating, and in all front- and side-impact crash tests, it received 5-Star ratings. Some of the standard safety features found on the Quest include:

Colors will vary by trim, and a complete list is viewable at CarsDirect.com. Some of the available combinations include:

There are currently no hybrid models of the Quest in production.

According to Kelley Blue Book, "it's worth noting that the Quest's resale won't be as high as that of a Honda or Toyota. Also, value-laden vans from Kia and Hyundai will be pushing Nissan from below." 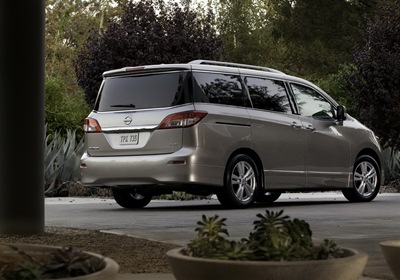 A fourth generation Quest will be built in Japan (or more specifically; the Shatai plant) for 2010. The platform will be shared with the next generation Nissan Elgrand It will be powered by Nissan's VQ37VHR with an expected output of about 300hp. Front wheel drive will be standard and the USDM version will have a full 5 extra inches of width to avoid the tall skinny look of Japanese vans. The Quest is expected to go on sale late 2010 or early 2011 as a 2012 model.

The Quest was redesigned in 2004 whereas the Villager was discontinued in 2002. Production moved to Canton, Mississippi. The current "aggressive" design bears a passing resemblance to major shareholder the Renault Scénic. The Quest is powered by the oft-used 3.5-litre VQ35DE model engine from the Maxima, Altima, and others. In the Quest, it produces 240 horsepower and 242 ft·lbf of torque. The Quest has a flat folding rear bench and the two middle chairs fold nearly flat into the floor. The interior volume is 211.9 cubic feet.

The second generation Quest has been both praised and criticized for its styling. The center-mounted instrument panel -- the speedometer and tachometer are in the center of the dash, rather than in front of the driver -- has been especially criticized. Sales of this second generation model have been less than expected, and Nissan is planning to redesign the much-criticized interior for the 2007 model. 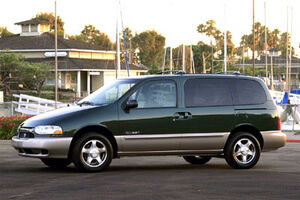 For 1999 the Quest got a facelift that gave the exterior a more aerodynamic look. The '99 that the Nissan Quest also got a power boost via the 3.3 liter VG33E SOHC engine, making 170 horsepower and 200 ft·lbf. The XE grade was discontinued and the GXE was move to base model. Two new grades were introduced: the top of the line GLE and the sport model SE.

Nissan imbued the 2001 Quest minivan with a raft of minor improvements. Styling front and rear was updated, along with new alloy wheels debut on all models. The entry-level GXE gained a rear stabilizer bar, while the sporty SE received acceleration-sensitive strut valving and a strut tower brace. New interior gauges and fabrics as well as a 130-watt sound system are standard on SE and GLE. Luxury GLE models also received an in-dash six-CD changer and a wood and leather steering wheel. An optional overhead family entertainment system replaced the former floor-mounted model, though that rather archaic unit can still be specified for SE and GLE Quests equipped with a sunroof. Front seatbelts were given pre-tensioners. 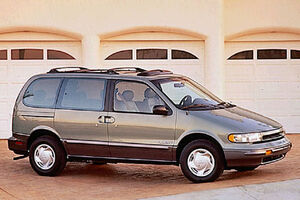 The Nissan Quest was a new model made by Nissan to compete in the minivan segment. The Quest was a successor to the Axxess, which was sold in the United States in 1990 only and in Canada from 1990-1995. The Quest was initially powered by Nissan's 3.0 liter VG30E SOHC engine that made 153 horsepower (the engine is a slightly modified one then found on other Nissan vehicles, one of the requirements of Ford was it be modified to become a non-interference engine, thus if the timing belt breaks, there would be no damage to the valves). The Quest was available as GXE or XE models. Because of manufacturing issues, Nissan had an arrangement for Ford to assemble the minivan in North America, and in turn they were allowed to rebadge it and sell it under the Mercury brand as the Villager. This generation of the Quest minivan was built in Avon Lake, Ohio, where the Villager was also built.

An initial complaint was the sometimes annoying motorized shoulder seatbelts. Seating was for 7, with a removable 2-seater bench in the middle, allowing the 3rd row bench of 3 seats to slide up (either folded up for more room or down for passengers) behind the front for more rear cargo room.

1996 saw the introduction of changes to the front and rear facia, as well as headlights and tail lamps.

Retrieved from "https://automobile.fandom.com/wiki/Nissan_Quest?oldid=104344"
Community content is available under CC-BY-SA unless otherwise noted.