The Nissan Murano is a near-luxury mid-size crossover SUV manufactured by Nissan Motors which began retail sales in the 2003 model year, originally as the top-of-the-line SUV, which was larger than the Pathfinder, but the Armada took over from the Murano as the top SUV in the Nissan lineup for 2004. Designed at Nissan Design America in La Jolla, California, it is based on the Nissan FF-L platform used by the Maxima and the third-generation Altima. The Murano is currently slotted between the compact Xterra and mid-size Pathfinder models, since the Pathfinder surpassed the Murano in size for the 2005 model year. Currently, it is the only Nissan crossover SUV sold in the United States, where it became Nissan's best-selling SUV, knocking the Pathfinder off the top spot.

The Murano was nominated for the North American Truck of the Year award for 2003. It was also named the best premium midsize SUV by AutoPacific. The vehicle itself is notable for being one of the largest vehicles available with a continuously variable transmission. Most luxuries expected in a car are standard kit in the Murano. The engine, a 3.5L 245-hp V6, comes straight out of the Nissan 350Z and is specially tuned for the Murano. The "All-Mode 4x4 with ESP+" is a form of traction control embedded into the car's onboard computer and is designed to provide 'joy' to drive. The car is available with 4-wheel drive and has 4-wheel independent suspension. A luxury feature of the car is a rear-view camera in addition to a rear-view mirror. A full set of airbags, steel reinforced cabin, and head restraints are safety features designed to protect the interior whilst ESP, ABS, EBD and brake assist are mechanical safety features.

2017 Nissan Murano
Add a photo to this gallery

The Murano SL adds on the following features to the S:

The Murano SE adds on the following features to the SL:

Safety features standard on the Nissan Murano include: 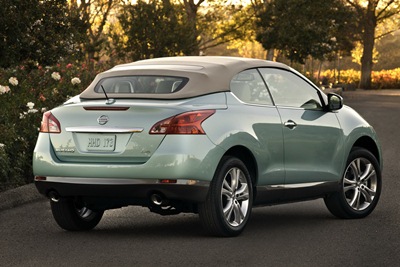 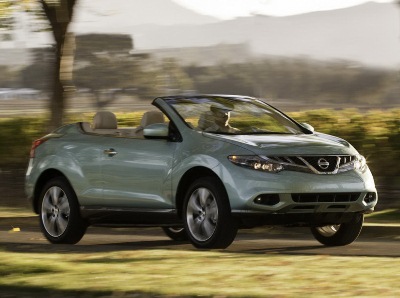 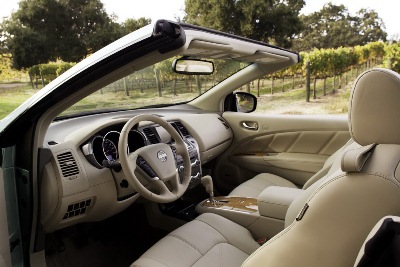 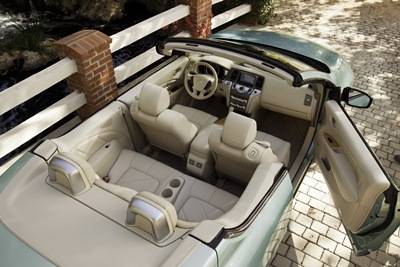 Nissan skipped the 2008 model year with the introduction of the next generation Murano – as a 2009 model. The 2009 Murano made its public debut at the 2007 Los Angeles Auto Show in November and sales began in early January 2008.

The revised exterior styling bears an increased family resemblance to the Rogue, while still maintaining distinctly Murano cues with its aggressive front fascia and rear quarter windows. The interior has also been completely redesigned, with the use of a more traditional instrument cluster and notably higher-quality materials. [8]

The 2009 Murano is offered in three trim levels: the base S, the mid-grade SL, and the top of the line LE. The performance-oriented SE model is no longer available. The S and SL are offered with standard i-AWD (Intuitive All-Wheel Drive), with optional FWD available. The LE trim is AWD only.

New features, some of them optional or available only on the LE grade, include rain-sensing wipers, power rear lift gate, power fold-up rear seats, iPod integration, and a hard-drive based, touchscreen navigation system. The S and SL feature aluminum interior accents, while the LE sports wood-tone trim. Like the first-generation model, there is no third-row seat.

The Murano is now based on the Nissan D platform shared with the fourth generation Nissan Altima and the new 2009 Nissan Maxima. Nissan has given the 2009 Murano a revised version of the award-winning 3.5L VQ engine rated at 265 hp, an increase of 20 over the previous model. Torque is rated at 248 lb-ft. The engine is mated to a revised Continuously Variable Transmission with Adaptive Shift Control. EPA fuel economy is rated at 18 City / 23 Highway.[9]

Standard safety features on all trims include 4-wheel disc brakes with ABS, brake-assist, and electronic brake-force distribution; electronic stability control; and front, side-, and side-curtain airbags. The NHTSA awarded the Murano 4 stars on the frontal crash test and 5 stars for side impacts.[10]

The Nissan Murano is named after a group of Italian islands near Venice. Much like Murano glass from which it gets its name, this crossover SUV from Nissan shares in painstaking craftmanship, warmth, and beauty. The Murano also keeps true to the tagline, "SHIFT_design," as it doesn't follow the conventional SUV body structure and design concepts. Focused on driving performance and inspired by the theme, "sculpture in motion," the exterior styling expresses SUV strength in the lower body and sport sedan-like openness in the cabin.

Models powered by a 3.5-liter V6 engine are fitted with Nissan's XTRONIC CVT-M6 continuously variable transmission with a 6-speed manual shift mode. This combination delivers powerful driving performance, supported by ample torque output, with the vehicle dynamics of a sport sedan. The Murano has received numerous awards and accolades in the North American market, where approximately 80,000 units have been sold since it was rolled out in December 2002. Many customers in Japan have also expressed interest in the Murano following its display as a reference model at the Tokyo Motor Show in October last year.

Retrieved from "https://automobile.fandom.com/wiki/Nissan_Murano?oldid=111244"
Community content is available under CC-BY-SA unless otherwise noted.