The Nissan Maxima is a car manufactured by Nissan that is in a line of upper mid-size executive and sports sedans. The Maxima debuted in July, 1976 as an upscale version of the Nissan Bluebird, was sold outside Japan as the Datsun 810 and was spun into its own line in 1981, having been made continuously since then. Most pre-2004 Maximas were built in Oppama, Japan, until the current North American Maximas started being assembled in Smyrna, Tennessee.

The 3.5 SE come nicely equipped with:

Key upgrades for the 3.5 SL include:

Both trims come with the following available options:

Today's actual prices for the Nissan Maxima can be found at CarsDirect.

The Maxima takes Regular 87 octane but for maximum power, Premium fuel is recommended.

Nissan has no plans at this time to create a hybrid version of the Maxima. The much anticipated Nissan Altima Hybrid will debut later on this year.

Road and Track magazine says that the "cut-out dash near the windshield is unique, and it's lined with a suede material (which makes its way around to the doors) that entices you to touch it."

The Nissan Maxima is ranked fifth among all mid-size cars for resale value on Autos.com. Values for used Maximas can be found on CarsDirect.

Edmunds.com complained that the Maxima's navigation system still needs a little more tweeking, as they were unimpressed with the "small joystick-type button that must be used to access certain information in the main display screen." 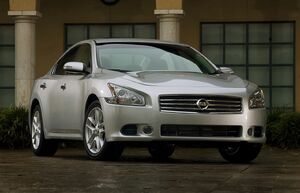 The latest generation Maxima, codenamed "A34", shares its platform with the Nissan Altima. In the US, it comes with the venerable VQ35DE, a DOHC V6 engine that now produces 265-hp (198kW). The VQ35DE and its predecessor, the VQ30DE, have won Wards 10 Best Engines award every year since the competition's inception in 1995.

The VQ35DE is also used in the 350Z Track, Touring and 35th Anniversary Edition where in new models, it yields 221kW. It is also present in the Nissan Murano, Quest, Altima, Infiniti G35 sedan and coupe, Infiniti FX35, and the Infiniti M35.

The rear independent suspension returns, this time using a multilink setup similar to the Altima.

Despite the tuned engine and the sportier positioning, it is slower than the Altima, thanks largely to its heavier weight (200 lbs. up).

A smaller Maxima, from 2003, is sold in the Asia-Pacific region and based on the Nissan Teana. In some markets, it is sold as the Nissan Cefiro. It is built on the standard FF-L platform of the Altima, rather than the stretched FF-L used on the American-market Maximas. The American Maxima is known for a balance between sport and luxury; other models tend to focus more on comfort.

The 2000 Maxima (designated "A33") was a refresh of the previous car, designed at Nissan's La Jolla, California design studio. The engine was a 222-hp (166kW) 3.0L VQ30DE V6. This variant of the VQ30DE was referred to the VQ30DE-K. In this variation, there were three models (GXE, GLE, and SE). The GXE was the "base" Maxima. The GLE was the "luxury" variant and had 16-inch wheels. The GLE was the basis for the Infiniti I30, (JDM Nissan Cefiro). A 2001 "20th Anniversary" edition got an increase of 5-hp (4kW), different interior treatment, body kit, special wheels and other tweaks.

In 2002, the engine was replaced for the whole lineup with a 3.5L VQ35DE that produced 255-hp (190kW) and 246ft·lbf of torque. In addition, the model got a slight refresh with a larger grille opening, headlamps with high-intensity discharge (HID) low beams, a six-speed manual transmission with optional helical limited-slip differential, revised 17-inch six-spoke wheels on the SE models, new 17-inch seven spoke rims on the GLE models, clear tail-lights, and some interior and exterior refinements over the 2000 to 2001 models. In 2003, there was a special package called the "Titanium Edition" with special wheels and interior treatment, as well as a "Meridian Edition" package which included heated seats (most of the time leather, although some were available with heated cloth), and a GPS navigation system. The Meridian Edition was available in all colors, but a new color was available only with the Titanium Edition (Polished Titanium). The last generation Maxima GLE was the basis for the Infiniti I35.

The car was redesigned again in 1995 as the A32. A new VQ30DE 190-hp (142kW) 3.0L V6 was the only engine option. Its smooth, powerful acceleration and long-term durability helped the Maxima earn its first "top ten engine of the year" award which it has now been recognized 10 years in a row. The car was redesigned to compete with the new Mazda Millenia.

The exterior was refreshed for 1997, with clear-lens headlights, a slightly different rear fascia with new taillights, and a chrome grille insert (body color for SE models) was added. Among interior changes were a different steering wheel and CD player. Front seat-mounted side impact airbags were added as an option for 1998 and 1999 models. The independent rear suspension was replaced with a cheaper torsion bar solid axle. There were also structural modifications to improve crash worthiness for the 1997 to 1999 models.

The North American 1995 Maxima included a Bose sound system on the GLE (optional on the SE) which had a 6 speaker sound system. The 4th generation Maxima was highly appraised for its roomy interior. In addition, this version of the Maxima is the most popular with tuners or modders because of its low price and performance parts availability.

This particular generation was sold in Japan as the Nissan Cefiro, which previously was a separate rear wheel drive car. For the Japanese market, a Cefiro-badged station wagon was available. The Cefiro was sold in the US as the Infiniti I30.

The VE30DE engine, plus a limited-slip differential, became standard on the SE models in 1992. The SE models can be further distinguished from the GXE by their white-faced gauges, twisted spoke turbine wheels, firmer sport suspensions, and optional 5-speed manual transmissions, which weren't offered on the GXE models after 1992. The automatic transmission on all GXEs and optional on SEs was an innovative compact unit from Jatco, featuring four-speed electronic control and adaptive 'sport' and 'comfort' modes that shift at different points.

During this year, the Maxima was first introduced to the UK market. It was made available as a choice of three models, the 3.0, 3.0S and 3.0SE. All options were available with an automatic transmission only.

Unlike later models, the J30 had an independent rear suspension that was absent from the Maxima until the 2004 models.

By many Maxima enthusiasts, the J30 model is considered to be the best looking Maxima to date.

In the fall of 1984, the first front-wheel drive Maxima (based on the Bluebird U11) was introduced. This Maxima was available with a 157-hp (117kW) 3.0L V6 VG30E engine and a 4-speed automatic or 5-speed manual transmission. 1988 was the last year for the Maxima station wagon, which had been offered since the Datsun 810 days. In late 1986, the 1987 Maxima was introduced with a freshened exterior and interior. Automatic lapbelts were new options on both the sedan and wagon.

The first car to wear the Maxima name was introduced in 1981. It was essentially a Japanese-market Bluebird 910 with a 3.9-inch longer nose. The car was offered as the 810 Deluxe or 810 Maxima that first year, and all 810s became Maximas for 1982. In 1984, the last year of the first generation Maxima, American Datsuns began carrying the "Nissan" badge as well (only 1984 Nissans have both "Nissan" and "Datsun" on the back of the car). An episode of the MTV show "Pimp My Ride" featured a Maxima station wagon that Xzibit (the show's host and rapper) referred to as the "identity crisis" since the vehicle sported both "Datsun" and "Nissan" badges.

The power steering pump was sourced from General Motors' Saginaw Gear division. This was the second Nissan to use US-sourced parts besides the Borg-Warner T-5 transmission used in the Datsun 280ZX Turbo.

The Maxima model line began with the Nissan Bluebird Maxima, which was available in the US as Datsun 810 from February 1977. It was powered by two versions of the SOHC Nissan L-series I6 engine, a 2.0L displacement for the Japanese market and a 2.4L (as found in the Datsun 240Z) for the US market. The Bluebird Maxima used a carburetor for the base model and fuel injection for the sporty version. The 2.0L engine was good for 122PS JIS (90 kW), while the bigger American engine could reach 125-hp SAE (93 kW). These cars were rear-wheel drive and had had a semi-trailing arm rear suspension. The station wagon variant had the rear live axle for load carrying reasons.

The 2-door coupe version was introduced in 1979 along with an exterior refresh, and was available in the Maxima lineup in the Datsun 810 only. Datsun's new Nissan 280ZX shared the 810's chassis, though the 810 did not get that car's larger 2.8 L engine.

In the film 1980 film Gloria, an 810 was seen as a getaway vehicle after Gena Rowlands murders four hitmen.

The Nissan Maxima has also gone by the name "Nissan Bluebird" in foreign markets. In markets outside North America, the Maxima is called a Teana. In Australia, the Maxima was released for sale in 1989 with the 6 cylinder engine as standard. With the fourth generation of the Australian-bound Maxima, it was replaced with the Teana with the Maxima name.