The Nissan Altima is a mid-size car currently being manufactured by the Japanese automaker Nissan, and is arguably a continuation of the "bloodline" that began with the Nissan Bluebird in 1957. It is larger, has more features, and is more expensive than the Nissan Sentra compact car; but is cheaper, less luxuriously appointed, and offers less powerful engines than the Nissan Maxima sports sedan. It competes with the Honda Accord, Toyota Camry and Mazda Mazda6. 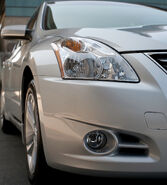 The Nissan Altima gets a completely new look for 2007; one that bears a closer resemblance to the Nissan Maxima. From push-button ignition, CVT transmission, touch-screen navigation, and Bluetooth hands-free phone systems, the Altima is not only exhibits sleeker designs on the outside, but an innovative interior, as well. Nissan just previewed the Altima Coupe at the 2006 LA Auto Show. Being released as a 2008 model the Altima Coupe is set to compete with the Toyota Camry Solara, the Honda Accord coupe and the Pontiac G6 Coupe.

An SE-R high performance model is expected sometime in the near future.

Current pricing on the Altimas can be found at the Nissan Website.[2]]

EPA estimates for the 2007 Altima can be seen below.

Consumer Reports gave the 2007 Altima an above-average rating in reliability for the 4-cylinder engine, and an average rating for the V6.

Automotive Information Systems (AIS) gives the 2006 Altima a 5 out of 5 rating on reliability.

AIS flags moderate to significant problems with the engines in the 2002-2003 Altimas (Third Generation Altimas). The Mass Air Flow Sensor, Crankshaft Position Sensor and Camshaft Position Sensor occasionally fail, which can result in drivability problems. The respective cost of replacement is roughly $500, $100 and $50. AIS otherwise reports infrequent problems with low repair costs for the Altima.

The 2007 Altima has many safety features available, including Anti-Lock Brakes (ABS), Side Airbags and Side Curtain Airbags.

Nissan has entered an agreement with rival Toyota to use some of its Hybrid technology to create a Hybrid Cars 2007 Altima Hybrid]] model. Up to 40,000 per year will by built at Nissan's Smyrna, Tennessee plant. Sales of the Hybrid Cars Altima]] will be limited to the U.S. states of California, Connecticut, Maine, Massachusetts, New Jersey, New York, Rhode Island, and Vermont.The Hybrid Altima features a 2.5 L engine QR25DE, CVT transmission, and electric motor/generator.

Nissan Altima is ranked first among all mid-size cars for resale value on Autos.com. Values for used Altimas can be found on CarsDirect.

In 1993, Nissan discontinued its much-criticized Stanza compact car, replacing it with the US-made Maxima, making it Nissan's entry-level mid-size car. The very first Altima rolled off the assembly line on June 15, 1992 as a 1993 model. Until June 2004, all Altimas had been built in Smyrna, Tennessee. However, in June 2004, Nissan's Canton, Mississippi, plant began producing additional Altimas to meet high demand.

The fourth-generation Altima was announced at the 2006 New York Auto Show on April 12th, 2006. It is the first vehicle to use the smaller Nissan D platform, with a new front and upgraded rear suspension. The wheelbase is 1 inch shorter than the third-generation Altima, but interior space is said to be unchanged. The Maxima and Murano will continue on the larger FF-L platform.

The 2007 Altima will be the first to use Nissan's new 3.5 L V6 engine, and will also offer a continuously variable transmission. A 6-speed manual will be standard. The 2007 Altima will sport some more recent innovations in the market including, but not limited to, "Push-button start", Bluetooth capability for cell phones and a parking camera.

The third generation Altima, codenamed L31, first sold in 2002, has been well received by the press because of its design, power, and style. It was the first mass-market product built on Nissan's larger sedan platform. It is unique to North America and has no equivalent model in Japan, where smaller vehicles tend to be favored by buyers. The Japanese Nissan Teana is similar, but not identical and slots between the Altima and Maxima in size.

It was designed by Nissan's design chief Shiro Nakamura.

The second generation, codenamed L30, was an American market only version. It was designed in Nissan's California design center.

It came with the same KA24DE I4 DOHC engine as the first generation Altima. In 2000, the engine was upgraded to produce 155 hp. That year, the car also received a minor facelift: modified facia, one-piece head lamps with turn signals and new seats.

The GXE 2001 model has a powerful engine for a 4-cylinder. It's very comparable to the V6 engine, but with better gas mileage. It has better acceleration than the Honda Civic of the same year.

With the 2001 model, there have been reports of the factory-made hubcaps making a clanging noise when driving at reduced speeds.

The original 1993 Altima was a rebadged Japanese-market Nissan Bluebird (U13 series). The official name of the car was the Nissan "Stanza Altima", and the trunk lid had a sticker reading "Stanza" in stylized lettering.

The 1993 Altima had a single airbag on the driver's side, and used automatic shoulder belts for the front seats.

It came with the KA24DE I4 DOHC engine capable of developing 150 hp. The Altima replaced the Stanza.

This car also had advanced technology like cornering lights and a Heads up Display (1993-1994 GLE models only). Some models had keyless entry and alarm, sunroof and automatic climate control. The Nissan Bluebird U13 SSS had some extras the US spec Altima doesn't have like a rear windshield wiper (on models with spoiler only) and powerfold mirrors and ATESSA AWD.

In addition to North America, the Altima is available in the Middle East. In other markets, Nissan sells a related midsize sedan called the Nissan Teana built on the same FF-L platform.

Some feel that the interior finishes, including the dashboard, lining, and seat materials are sub-par in comparison to the quality of engine and exterior design, that is associated with the Altima.

This page uses content from Wikipedia; see Nissan Altima, which includes these contributors.

Retrieved from "https://automobile.fandom.com/wiki/Nissan_Altima?oldid=104547"
Community content is available under CC-BY-SA unless otherwise noted.