The Mitsubishi Eclipse is a two-door, four-seat sports car that was in production from 1990 to 2011. The Eclipse is produced solely for the United States and Canadian markets, where it has also been built as the Eagle Talon and the Plymouth Laser through the Mitsubishi Motors Corporation's close relationship with the Chrysler Corporation (now DaimlerChrysler) Their partnership was known as Diamond Star Motors, or DSM. The first and second generation DSM Eclipses remain popular among racers and other automotive enthusiasts in part because of the car's low price, high horsepower potential and wealth of aftermarket parts.

The 2007 is available in either a coupe or a convertible and three total trims: the GS, SE, and GT. The convertible Spyder does not come in an SE trim, and though the choice in engines is the same, the Spyders V6 just slightly less powerful than that found in the Coupe (260hp versus 263hp). The I-4 is a 2.4L 162hp engine. Here are some of the features found in the individual trim levels:

Adds to or replaces GS features with:

Adds to or replaces GS features with:

Today's actual prices for the Mistubishi Eclipse can be found at CarsDirect.

Although generally considered as reliable cars, Mitsubishi Eclipses (most notably the early 1G and 2G models) have their share of mechanical problems. Both early 4G63-powered models share a weakness of the engine, though the second generation 2G models seem the greater affected of the two. The issue in question with the otherwise sound four-cylinder 4G63 engine is a phenomenon that manifests itself as “Crank walk.”

“Crank walk” is a term coined for a “walking” crankshaft – that is, a crankshaft that moves too much inside the engine. This is also known as excessive thrust bearing play. The movement is usually due to the crankshaft not fitting inside its bearings correctly. While not bad for the crankshaft, the movement can place excessive or uneven loads on the bearings, causing premature failures. Crank walk is believed to happen more easily to modified engines.

Many 2G owners have suffered from walking crankshafts. It appears that Mitsubishi built many 2G engines using defective crankshafts, which were machined out of specification and are thus capable of moving around too much inside the block. All 2G model years appear to be affected to some degree.

1G owners do not generally need to worry, as there are no chronic problems with crank walk in pre-1995 cars. However, it is possible for any engine to experience crank walk if there is a problem with the crankshaft bearings. It has been reported that 4G63 engines manufactured from late-1992 through 1994 on 1Gs are more prone to crank walk than engines manufactured from 1989 to early 1992. However, there can be no guarantees, since big block V8s and all other engines can also suffer from crank walk.

There are no safety ratings for the 2007 Eclipse available on the NHTSA website. However, Autos.com has the Eclipse tied for 4th with the Ford Mustang in the Sporty Car category for safety. The others ahead of the Eclipse include the Chevrolet Corvette, Mazda RX-8, and Volkswagen GTI. Standard safety equipment found on Eclipse models includes:

Colors will vary by trim, and a full list is viewable at CarsDirect.com. Some of the available choices include:

There are currently no hybrid models of the Eclipse in production. 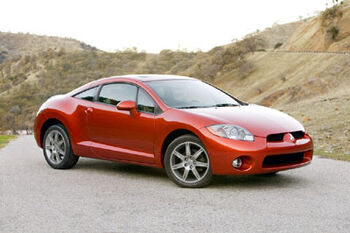 Details of the fourth generation Eclipse were revealed during late 2003 and 2004, and the car was shown at the 2005 Detroit Auto Show. Features of the new model include a 263 hp (193.9 kW) 3.8 L MIVEC V6 and a 165 hp (123 kW) 2.4 L I4, both derived from the 2004+ Mitsubishi PS platform family, with which the Eclipse shares many mechanical components. Like the 2004 Galant, the new Eclipse is FWD only, although a concept model has been produced by Mitsubishi and Ralliart with an AWD platform, the 4G63 engine from the Lancer Evolution, and more aggressive body styling with carbon fibre. The V6 produces 263 hp and 260 lb-ft of torque.

The fourth-generation Spyder (convertible) Eclipse will be released for the 2006 model year at the North American International Auto Show.

The models and standard / optional equipment:

Options Include- Sun & Sound package with a power sunroof is paired with a 650-watt (max.) Rockford Fosgate® audio system. Boasting nine speakers including a 10-inch trunk-mounted subwoofer, a 6-CD in-dash changer, and steering wheel-mounted audio controls, the package also includes a center display with outside temperature and compass readings and an electrochromic rear-view mirror, and a five piece body kit. 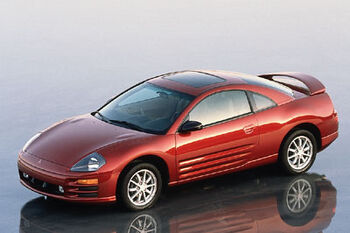 The Eclipse underwent a change into its current generation in 1999. The 4G63 was replaced by two powertrain options, a 150hp 2.4l 16 valve SOHC 4-cylinder (4G64) and a 205hp 24v SOHC 3.0l V-6 (6G72,Mitsubishi 6G7x engine). AWD was no longer an option. The suspension setup was adjusted to provide a softer and more compliant ride quality. As a result, some of the previous generation's more scrappy character disappeared.

No longer considered to be a DSM, it shared its platform and powertrain with the 8th generation Galant. Weight was also up slightly from the previous year's model, but the better torque response from the V-6 and additional weight in the front allowed for very similar acceleration numbers. In late 2001 power was lowered to 200hp as a result of tightened emission standards forcing MMNA to adopt the California standards for all variants of the car.

Shunned by some and praised by others the car was regarded by many as the red-headed stepchild of the family. Since the tuner friendly 4G63 was dropped, a majority of the tuners who grew up with the DSM family of vehicles shunned it for its lack of turbocharging, even though from a business standpoint the turbo models made up about 10 percent of actual models sold by Mitsubishi. As a result, the 3G lacked the aftermarket support that the previous models had. A large community has grown up around these vehicles and for the most part the parts gap has been filled. Also, since the release of the 4G Eclipse, the 3G has seen increased interest among the tuning community because of its lower price. The legacy of this vehicle is shaping to be quite similar to its predecessors. Its performance potential has only been realized after the car has been out of production.

The Eclipse was available in 7 trim levels: RS, GS, GS Spyder, GT, GT Spyder, GTS, and GTS Spyder. All models were FWD. The GTS trims were introduced in 2003, and the RS trim was dropped in 2005. 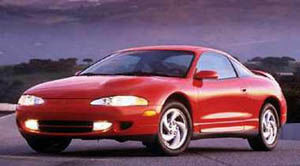 The second generation car maintained the market focus of the 1G car, but had a major update in styling and had different engines between trim levels. New to the line was a convertible model, the Spyder.

The models had different trim accoutrements:

There was a freshening of the style for the 1997 model year. The front grille opening was made less 'classic' and more 'aggressive' with regards to the radiator opening. The slightly reshaped headlights acquired black areas internally. The driving lights became smaller and round. The rear bumper cap was altered and had the reverse lights moved away from their original central position, presumably to reduce the 'ponderous-ness' or the rear view of the car.

The Talon was available in four trim levels, Base, ESi, TSi and TSi AWD. The Eagle Talon saw its production end in 1998 when Eagle went out of business.

There were similar alterations to the styling of the Talon as there was for the Eclipse.

There was a unique version of the 2G Eclipse sold in some European countries. It used a normally-aspirated Mitsubishi 4G63 motor, similar to what was available in the 1G, and unique amber rear turn signals.

The basic driveline layout of the Eclipse is a transverse-mounted 4-cylinder Chrysler 420A, Mitsubishi 4G64 or 4G63 engine. The Mitsubishi motors are mounted in the same orientation as for the 1G cars. The 420A-powered cars had the engine mounted on the right side of the car, and further back in the chassis. AWD models had a similar transmission to the 1G car.

All motors are in-line 4-cylinder gasoline engines. All have iron blocks with aluminum cylinder heads. The 4G63/4G64 motors retain the balance shafts for smoother operation, while the 420A does not use them. The turbo motors had an increase in compression ratio to 8.5:1 (from 7.8:1) and smaller turbos (a Garret T25 from the Mitsubishi TD05-14B).

The first generation Mitsubishi Eclipse was sold as an entry to mid-level four-cylinder sports coupe. Four trim levels were available: the bottom three were front wheel drive and the very top was all wheel drive. The top FWD and the AWD model were equipped with turbocharged engines.

The car underwent minor changes throughout its production; 1992-1994 models have updated sheetmetal and are easily distinguishable from previous vehicles. The Eclipse was revised into a new vehicle for 1995 (described below in the 2G section).

The Eclipse was available in four trim levels during its first-generation production run. AWD models were not available until halfway through the first model year.

These models varied significantly in drive trains, available options, and—to an extent—appearance. The Eclipse GSX, for example, was sold with different plastic body cladding than the base Eclipse.

The basic driveline layout of the Eclipse is a transverse-mounted 4-cylinder Mitsubishi 4G37 or 4G63 engine situated on the left-hand side of the car driving an automatic or manual transmission on the right-hand side. AWD models have a different transmission which includes a limited-slip center differential and output shaft for a transfer case, which drives the rear differential (also available as limited-slip) and half-shafts.

The 4G37 and 4G63 engines are both in-line 4-cylinder gasoline engines. The 4G63 is composed of an iron engine block and aluminum cylinder head and is equipped with balance shafts for smooth operation. The turbocharged version of the 4G63 (sometimes referred to as the 4G63T) is equipped with a lower compression ratio (7.8 vs. 9.0 in the naturally aspirated version) and oil squirters under the pistons in order to better cope with the stress and extra heat caused by forced induction.

There was also a difference between rear axle/rear ends. 1990-1991 had 3-bolt rear axle assemblies have 3 bolts attaching the axle to the wheel hub. 1992-1994 4-bolt axles have 4 bolts, as well as beefier axle cups, and are therefore far stronger.

The Eclipse Turbo was on Car and Driver magazine's Ten Best list for 1989 through 1992. 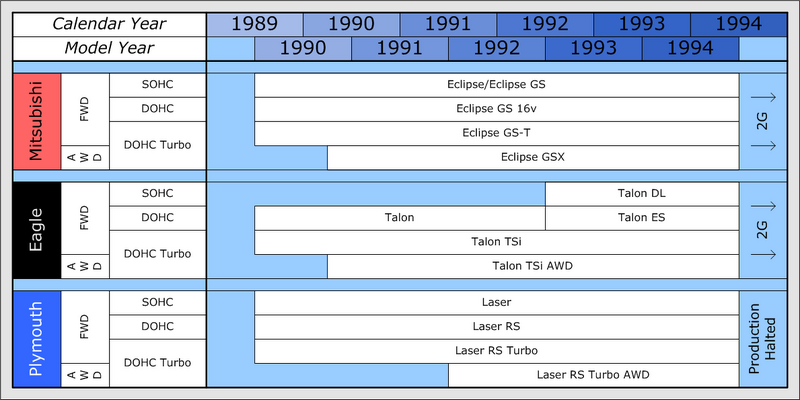 Mitsubishi's experience with sports cars starts in the early 1980s with the development and sale of the Mitsubishi Starion. Up until this point, Mitsubishi Motors had sold cars to the American market rebadged as Chryslers, Dodges and Plymouths. The Starion, similarly sold as the Chrysler Conquest, offered performance and features on-par with sports cars offered by Japanese makers with more experience in performance motoring. The Starion's main competitors were among the largest of the Japanese sports cars: the Toyota Supra and the Nissan 300ZX.

During the Starion's production run (1982-1990), Mitsubishi had no other true sports car offerings for the American market. At the same time (specifically in 1986), Chrysler was discontinuing their Laser sports coupe, which was a rebadged Dodge Daytona.

Mitsubishi Motors and Chrysler founded a new production division, Diamond Star Motors (DSM) in October 1985. The DSM plant was situated in Normal, Illinois and eventually produced cars bound primarily for the American market. The first cars to roll off the lines at this facility were the Mitsubishi Eclipse, Eagle Talon, and the Plymouth Laser.

Retrieved from "https://automobile.fandom.com/wiki/Mitsubishi_Eclipse?oldid=104036"
Community content is available under CC-BY-SA unless otherwise noted.