Mercury was an automobile marque of the Ford Motor Company founded in 1939 to market semi-luxury cars slotted between entry-level Ford and luxury Lincoln models, similar to General Motors' Buick brand and Chrysler LLC's Chrysler brand. To this day, most Mercury models are based on Ford platforms. The Mercury name comes from the name of roman god of speed who was the messenger of the gods, which was reflected in its focus during its early years on performance.

The Mercury brand was phased out in 2010, while Ford Motor Company will focus on the Ford and Lincoln brands.

Mercury, like the defunct Edsel, was created from scratch, rather than being a takeover of an existing company like Lincoln. Mercury's heyday was in the 1950s, when its formula of stretching and lowering existing Ford platforms was very successful. The marque has changed several times throughout its history. During the 1940s and 1950s, the make moved between as a "gussied up" Ford, to a "junior Lincoln" and even to having its own body designs. During the 1960s and early 1970s, Mercury began to distance itself from Ford and offered several different looking models such as the Cougar and Marquis. But in the late 1970s to the early 1980s the brand was joined at the hip with Ford again and its image suffered as a result.

Mercury sales peaked in 1979 at 669,138. Since then, sales have declined by more than half to roughly 200,000 annually. The Mercury brand is used in the United States, and was used in Canada and Mexico. In 1999, Mercury models were renamed as Fords in both Mexico and Canada. But in early 2000 the Mercury Brand was revived in Mexico.

History of Mercury from the beginning

Edsel Ford believed there was a golden marketing opportunity to produce a line of vehicles that would fill the price gap between Ford and Lincoln. The vehicles would be large, stylish and modern, yet still economical.

Edsel originally had many ideas about what to name his new vehicle line. After much deliberation, he chose the Roman god, Mercury - the fleet-footed winged messenger and god of commerce who symbolized dependability, eloquence, speed and skill.

Bob Gregorie, Ford's first design chief, worked closely with Edsel to develop the first Mercury, the Mercury Eight. Its 95-horsepower engine offered 10 more horsepower than the Ford V8, making it a robust performer. Design-wise, the Mercury Eight was considered to be among the most aerodynamic cars of its era. It was one of the first Ford production cars designed using a full-scale clay model. Dubbed The Super Ford, the Mercury Eight boasted the industry's first two-spoke steering wheel. In 1939, production reached more than 17,000 vehicles.

By 1941, more than 98,000 new Mercurys were built to meet a staggering demand, for a total of 155,000 vehicles sold since the introduction of the Mercury Eight. From 1942 to 1945, Mercury halted most of its production due to World War II. After the war, Henry Ford completely separated Mercury from Ford and established Lincoln-Mercury Division. For the first time, Mercury had its own vehicles. Because of the war, Mercury's 1946 models were slightly modified 1942 models. 1947 saw production increase to more than 86,000 vehicles. On April 29, 1948, Lincoln Mercury introduced the first all-new postwar Mercury vehicles.

1950 was Mercury's highest production year to date with 344,081 vehicles built. In August of 1950, Mercury sold its one-millionth car. Mercury was now truly earning a reputation for performance and innovation. In 1951, the first automatic transmission - the Merc-O-Matic - was added to all models. Other stylish appointments followed, including "frenched" (fitted flush with sheet metal surround or behind grille) headlamps, airfoil bumpers, monopane windshields, jet-scoop hoods, aircraft-style instrumentation and hideaway gas caps. In 1955, James Dean drove a customized 1949 Mercury in the movie "Rebel Without A Cause." The '50s closed out with the "Big M" dominating the racetrack and the sales charts.

In 1960, Mercury introduced the Comet and Meteor lines. The Comet was a luxury compact and the Meteor was a downsized full-sized vehicle that reflected a trend toward smaller cars. The Comet made a big splash at the 1963 Daytona International Speedway Durability Run. Over the 40-day race, a fleet of Mercury Comet Calientes covered 100,000 miles at speeds averaging more than 105 mph. As a result, sales went through the roof. In 1967, the Cougar was introduced and became an icon with muscle-car enthusiasts, winning Motor Trend's "Car of the Year" Award.

The oil crisis of the '70s sent gas prices skyrocketing - which had consumers looking to buy smaller cars with better fuel efficiency. Mercury responded by adding the European-built 1971 Mercury Capri. Another addition was the Bobcat. The late '70s brought about a completely redesigned Cougar XR-7. From 1977-1979, Cougar experienced a great increase in sales, the most impressive being in 1978 when sales reached 213,270 units. Overall, sales continued to climb. In 1979 Mercury sales soared selling 669,138 units and earning 6.75 percent market share.

In the '80s, Mercury tried to capture a wider audience with a range of vehicles that included the Capri, Cougar, Lynx and the Grand Marquis. But the biggest success came in 1986 with the launch of the all new Mercury Sable. The car featured a radical aerodynamic design that reduced drag to increase fuel efficiency. This involved long-term planning of a kind never seen before in the auto industry. In the process, Ford engineers tore apart hundreds of competitors' cars, a process called "reverse engineering."

The early part of the '90s brought about the introduction of the all-new minivan, the Mercury Villager. Customers loved its spacious interior, exceptional car-like ride and upscale amenities. In 1997, Mercury introduced its first SUV, the Mountaineer. This vehicle achieved great success in attracting young buyers to the market. Mercury continued to turn heads with its all-new 1999 Cougar. It offered new-edge styling that contrasted smooth aerodynamics with crisply intersecting surfaces, and was a big success.

The future direction of Mercury came to light with the revamped 2002 Mountaineer. America's favorite muscle sedan returned in 2003 as Mercury introduced the 302-hp Marauder. In the fall of 2004, Mercury introduced the all-new Mariner and Montego - marking a bold new era in technological excellence. With such features as unsurpassed interior space, available all-wheel drive and a Continuously Variable Transmission, Mercury Montego was greeted with critical acclaim. Mariner fared equally well, offering the public available Intelligent four-wheel drive, side-curtain and front-seat side-impact airbags and a 200-hp V6, among other amenities. And in 2006 the indrocution of a new mid-size luxury sedan the Mercury Milan and Mercury's first ever Hybrid vehicle the Mariner Hybrid. In 2007, Mercury rolled out the redesigned 2008 Mariner and 2008 Sable, which both featured crisp exterior lines and were filled with the latest in driving technologies. One of Mercury's newest technologies optional for fall of 2007 is the voice-activated, in-car SYNC communication and entertainment system, which was developed in collaboration with Microsoft. For 2008, Mercury is opening new doors.

As of 2008, Mercury's range is quite small and have similarities to those sold under the Ford Brand. Many industry observers have questioned whether Mercury will survive in the long term, but Ford insists that there is no intention of letting the brand die. The introduction of new models, such as the Milan, the Mariner, the Mariner Hybrid as well as the revival of the Sable and the up coming 2009 Milan Hybrid would seem to bear that out. Its alliance with Lincoln has helped keep the brand alive; all Lincoln dealers also sell Mercury vehicles, as they desire some lower-priced vehicles in their showrooms.

As part of their effort to re-assert the brand, Mercury has also begun implementing design elements common to all of their vehicles to create a more "unified" marque. These include an update of the signature "waterfall" front grille and badge lettering based on that of the last generation Cougar. However, Mercury's future is no longer in doubt. In July, 2008 Ford Motor Company ended speculation about the future of Mercury by making the brand part of its new small-car strategy.

However, on June 2, 2010, it was announced that Ford will cease production of the Mercury brand after the 2010 model year. Mercury sold fewer than 90,000 units per year, less than the number Plymouth and Oldsmobile sold before they went defunct.

The first logo of the Mercury brand was its namesake, the Roman god Mercury. The side profile of his head, complete with the signature bowl hat with wings was used during the early years.

In the 1950s, the logo became a simple "M" with horizontal bars extending outward from the bottom of its vertical elements in each direction. This was described in advertising as "The Big M" - probably most notably as the prime sponsor of The Ed Sullivan Show. During the late 1960s and up to the mid-1980s, the Mercury used the "Sign of the Cat" ad campaign based on its popular Cougar model. Many of the cars during this time carried cat related names such as the Mercury Lynx and Mercury Bobcat. On some of the upper-tier models, such as the Marquis and Grand Marquis, Mercury also used Lincoln's diamond logo during this time.

During the late 1980s, the logo changed from the Cougar to a highly stylized letter M (nicknamed 'the Waterfall' by some). The reason behind this new logo has never been fully explained, but it is still being used today. Since 1999, the Mercury logo has had "Mercury" written on the top part of the logo.

Mercury sponsored a professional cycling team from 2000 until 2002. 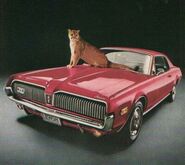 A suggestion of what could make Mercury the success it once was... (aka Mercury Mondeo)
Add a photo to this gallery

Retrieved from "https://automobile.fandom.com/wiki/Mercury?oldid=85550"
Community content is available under CC-BY-SA unless otherwise noted.