The Mercedes-Benz SLS AMG is a luxury grand tourer automobile developed by AMG to replace the Mercedes-Benz SLR McLaren.[1] The car is the first Mercedes automobile designed in-house by AMG and is described by Mercedes-Benz as a spiritual successor to the 300SL Gullwing,[2] despite a design that visually draws more of its inspiration from the 300 SLR Uhlenhaut Coupé.

The vehicle was unveiled at the 2009 IAA. Sales began in mid-2010 in Europe with MSRP of €177,310 (including taxes)[3] and will begin in the United States in mid-2011 for less than $200,000. Promotional advertisements of the SLS AMG have also begun airing in India as well from April 2010. The SLS AMG is featured as the cover car for the PlayStation 3 racing game Gran Turismo 5, and was the safety car for the 2010 Formula One season. [4] The car was replaced by the amg gt.

The SLS AMG is powered by the internally designated M159 engine. It is based on AMG's M156 engine, but is rated 563 bhp (571 PS; 420 kW) @ 6800rpm and 650 Nm (480 lb·ft) @ 4750 rpm. Compared to the standard AMG engine, the SLS's engine includes an all-new intake system, reworked valve train and camshafts, the use of flow-optimised tubular steel headers and dethrottling of the exhaust system. The engine also utilizes a dry-sump lubrication system to lower the center of gravity of the car. The fuel consumption of the SLS AMG is around 13 L/100 km (18 mpg-US).[2]

Optional on the SLS AMG are carbon-ceramic disc brakes. These brakes provide increased stopping power with a 40% weight reduction compared to the standard brake system.[2] 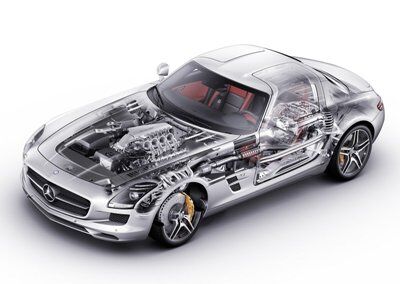 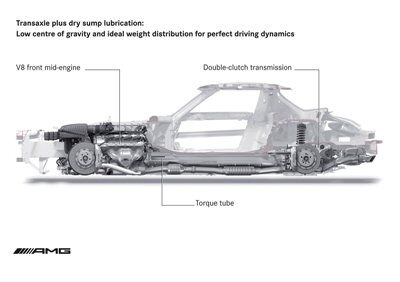 Mercedes-Benz SLS AMG in Transformers: Dark of the Moon 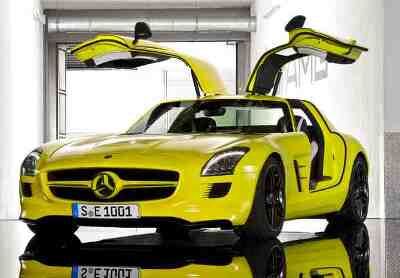 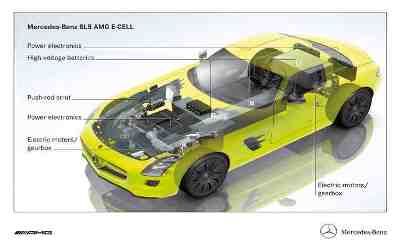 The SLS will also feature an all-electric model. This offspring of Daimler's US$ 50 million investment in Tesla Motors is powered by four electric motors placed close to the wheels, mounted just inboard of the suspension components rather than in the wheel hub itself so as not to add unsprung mass. According to Mercedes, the electricity will be stored in a 48 kWh liquid cooled lithium ion battery pack placed along the central tunnel. In all, the electric drivetrain is expected to produce 526 hp (392 kW) and 649 lb-ft (880 Nm) of torque. It also translates to a naught to 100 km/h acceleration of approximately 4 seconds. The electric SLS will not be ready in time for the conventionally powered model's debut in September 2009 but it is expected to be ready for sale by 2013. [1][2]

On June 21, 2010, Mercedes finally revealed the SLS E-Cell prototype, a working prototype of the 2013 production model. Covered in a bright yellow paint called Lumilectric Mango, the E-Cell a quartet of electric motors with the pair at each axle integrated with reduction gears to drive all four wheels producing 526 hp and 649 pound-feet of torque and redlining at a loftly 12,000 rpm. The installation of the front motors necessitated the replacement of the double-wishbone suspension with a multi-link setup with push-rod dampers.

The lithium polymer batteries are split between the center tunnel and a box mounted behind the cockpit, and can provide a combined output of 480 kilowatts (643 horsepower). Two separate cooling circuits can manage the temperature of the battery packs and related power electronics by either heating or cooling the units as needed.

An extendable front splitter works with the reshaped rear diffuser to increase available downforce beyond what's possible with the standard 6.2-liter-V8-powered SLS. Inside, the electric SLS gets a 10-inch touch screen in the center console.

The car is made to honor the classic Mercedes-Benz 300SL. Retro features include Gullwing doors, big Mercedes Benz logo at the grille and front engine layout, rather than having the engine at the back like most of its competitors.

This is the first car that was built completely by AMG from the scratch. Usually AMG cars are modified Mercedes cars. 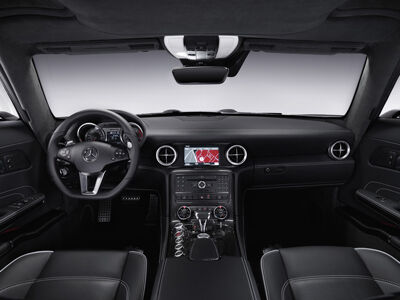 3 test cars (2 coupes and a convertible) were spotted doing trial runs in a small mining town in Nevada and in Monterey, California.[3]