Maybach-Motorenbau GmbH, founded by Wilhelm Maybach and his son Karl, was a German manufacturer of engines for Zeppelins and later, large and luxurious automobiles. The company has historic roots through the involvement of its founder who was the technical director of the Daimler-Motoren-Gesellschaft (Daimler Motor Company). Today, the brand is owned by DaimlerChrysler and based in Stuttgart. Between 1921 and 1940, the company produced various classic opulent vehicles.

During World War II, design and production was redirected to military applications — Maybach designed and/or produced the engines of many German military vehicles and German armored fighting vehicles such as the Panzer IV, Tiger I and the Panther tank.

The company also built heavy duty diesel engines for marine and rail purposes. Famous locomotives with Maybach engines include the German V200 and between 1961 and 1964, British Rail Class 52 "Westerns."

In 1997, Mercedes-Benz presented at the Tokyo Motorshow an ultra-luxury concept car under the name Mercedes-Benz Maybach (V12, 5987 cc, 394 hp). The concept was quite successful and it was decided to develop it. Mercedes however took the decision to market the car under the sole brand Maybach.

Maybach was therefore revived as a brand in the early 2000s, with the production of the new model in two sizes; — the Maybach 57 and the Maybach 62, (the numbers are equal to the lengths of the automobiles in decimeters); the longer 62 allows rear occupants to recline fully in their seats. The prices range from US$305,000 to $357,000; they are priced to compete with the top-of-the-range Bentley and Rolls-Royce automobiles. In 2005, the new 57S has been added, sporting a more powerful engine (6.0L V12 bi-turbo, producing 604bhp and 737lb/ft of torque) and cosmetic touches that provides a sporty image. Also the 57s, (sport) in 2006. When a customer decides to order a Maybach they can go to Sindelfingen, the marque’s headquarters, (or meet over a video conference centre at a dealer in their own country) to specify every and any detail they desire. Many customers will personalise their cars with their initials or coats of arms. Maybach executives liken the experience to ordering a custom-built yacht or a personalized jet aircraft. Also, with a hand-crafted finish quality, and over two million equipment options, it is unlikely that two identical cars will ever leave the factory. The maybach then, with its V12 engine and its reclining leather seats, combines utter speed and performance with complete luxury.

W2 were the 5.7L inline six engines built for and ordered by Spyker. Not all were purchased, and Karl had to build cars featuring the engines to offset costs. Around 1800 Maybachs were built before WW2.

A Maybach 57 at the Scarsdale Concours 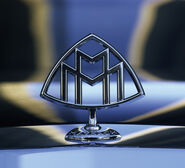 Retrieved from "https://automobile.fandom.com/wiki/Maybach?oldid=48374"
Community content is available under CC-BY-SA unless otherwise noted.