Autopedia
Register
Don't have an account?
Sign In
Advertisement
in: Pages with the First Anniversary Infobox Upgrade, Maserati vehicles, Grand tourers,
and 4 more

The Maserati GranTurismo is a two-door, four-seat coupé produced by the Italian car manufacturer Maserati. It shares the platform of the Maserati Quattroporte V and parts of the Ferrari 599 GTB and Scaglietti.

Launched in 2007 as coupe, with a cabriolet model added in 2010, production of the GranTurismo is scheduled to end in 2014, with its replacement not expected to be launched until 2018.[1]

The vehicle was unveiled at the 2007 Geneva Motor Show.[2] The GranTurismo has a drag coefficient of 0.33. The standard version has a 4.2 litre (4,244 cc (259.0 cu in)) V8 engine designed in conjunction with Ferrari with 405 PS (298 kW; 399 hp) and automatic ZF gearbox six-speed transmission. The 2+2 body has been derived from the Maserati Quattroporte V, with double-wishbone front suspensions and a multilink rear suspension. The car is a GT (Grand Tourer) that emphasis comfort in harmony with speed and driver-enjoyment.

The vehicle was unveiled in 2009 Geneva Motor Show.

Maserati GranTurismo MC Sport Line]]It is a customization programme based on the works on GranTurismo MC Concept. Changes include front and rear carbon-fibre spoilers, carbon fibre mirror housings and door handles, 20 inch wheel rims, carbon fibre interior (steering wheel rim, paddle shifters, instrument panel, dashboard, door panels), stiffer springs, shock absorbers and anti-roll bars with custom Maserati Stability Programme software and 10 mm (0.4 in) lower height than GranTurismo S. The programme was initially offered in GranTurismo S, with the product line expanded to all GranTurismo vehicle and all Maserati vehicles in 2009. Fifteen GranTurismo MC racecars were developed, homologated for the European Cup and National Endurance Series, one of which was taken to be raced by GT motorsport organization Cool Victory in Dubai in January, 2010.

Replacing both the GranTurismo S and S Automatica, the Granturismo Sport was unveiled in March 2012 at the Geneva Motor Show.[8][9] The revised 4.7L engine is rated 460 PS (338 kW; 454 hp). The Sport features a unique, MC Stradale inspired front fascia, new headlights and new, sportier steering wheel and seats. The ZF six-speed automatic gearbox is now standard, while the six-speed sequential transaxle is available as an option. The latter has steering wheel-mounted paddle shifters, a feature that’s optional with the automatic gearbox.

In September 2010, Maserati released that they will be officially showing a new version of the GranTurismo - the MC Stradale - at the 2010 Paris Motor Show. The strictly two-seat MC Stradale is more powerful (450 PS or 331 kW or 444 hp), Friction reduction accounts for the increase, says Maserati, thanks to the strategic use of “diamond-like coating,” an antifriction technology derived from Formula 1, on wear parts such as the cams and followers. It's also 110 kg lighter (1670 kg dry weight) from the Granturismo, and more aerodynamic than any previous GranTurismo model - all with the same fuel consumption as the regular GranTurismo.[10] In addition to two slits in the bonnet, the MC Stradale also receives a new front splitter and rear air dam for better aerodynamics, downforce, and improved cooling of carbon ceramic brakes and engine. The body modifications make the car 48 mm (2 in) longer.

The MC Race Shift 6-speed robotised manual gearbox (which shares its electronics and some of its hardware from the Ferrari 599GTO) usually operates in an "auto" mode, but the driver can switch this to 'sport' or 'race' (shifts in 60 milliseconds in 'race' mode), which affects gearbox operations, suspension, traction control, and even the sound of the engine. The MC Stradale is the first GranTurismo to break the 300 km/h barrier, with a claimed top speed of 303 km/h (188 mph).

The vehicle was unveiled at the 2009 Frankfurt Motor Show, with production beginning in 2010. The vehicle is built in the Viale Ciro Menotti Maserati factory. European sales were to begin in February 2010, with the United States receiving its first cars a month later. Planned sales for 2010 were 2,100 units, of which two thirds were intended to go stateside.

At the 2011 Geneva Motor Show Maserati unveiled a new version of the GranCabrio, with an enhanced level of performance and handling. This version also has the 4.7-litre V8, coupled with the ZF six-speed automatic transmission and fitted with the slightly uprated 450 PS or 331 kW or 444 bhp version of the V8 engine, with 510 N·m (380 lb·ft) torque. To hint at the car's more sporting nature, the headlights have black surrounds and other details such as the bars in the grille are also finished in black. There are also larger sideskirts as well as tiny winglets on the lower front corners.

The Fendi is a version of GranCabrio designed by Silvia Venturini Fendi.

The vehicle was unveiled in 2011 Frankfurt Motor Show.

Maserati gave the Gran Turismo a Facelift for the 2018 model year featuring a 4.7 L naturally aspirated V8 and with updated technology and a more aggressive styling on the exterior. Its design is inspired by the Alfieri Concept. The car is not expected to last long with a successor coming soon by at least 2020. 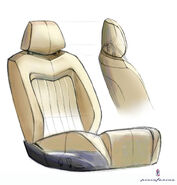 The interior, which can seat four full-sized adults, is lined in Poltrona Frau leather, similar to the Quattroporte. It also features a customizable wraparound interior trim. In the standard version these are available in "Smoked Quartz" and "Alu Grey", while upon request it is possible to choose among essences of genuine wood (Walnut, Tanganyika wood, Rosewood) for a warm and elegant environment, or as an alternative varnished hues (Black Piano, Rosso Sigillo, Giallo Decoro, Bianco Cotton, Blu Laque), for a more sporty and elaborate look. 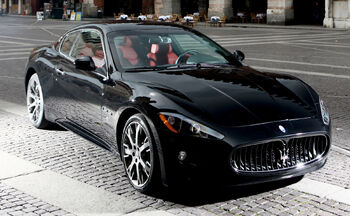 Many design elements also come from the Ferrari 599 GTB Fiorano (Which also happens to be a Grand Tourer.)