to celebrate Lamborghini’s 50th anniversary. When introduced in 2013 at a price of US$4,500,000, it was the most expensive production car in the world. The prototype, Car Zero, is finished in grey and includes an Italian flag vinyl on both sides of the car. The engine is a development of the Aventador's 6.5 L V12 and produces 750 PS (552 kW; 740 bhp).

Lamborghini built just 5 examples of the Veneno: 2 for itself, and just three for the customers. The first Veneno, with red accents, went to Antoine Dominic, owner of Lamborghini Long Island. The second went to Kris Singh, whose car was delivered with red, green and white accents. the third model was seen in Hong Kong en route to Macau where its new owner presumably resides. Car Zero, which was the vehicle on display, will be retained by the factory for the museum. The three production cars cost €3,120,000 each, and all three were sold.

The Veneno Roadster is a limited (maximum 9 units during 2014) version of the Lamborghini Veneno, commemorating the 50th anniversary of Automobili Lamborghini. It has exclusive alloy wheels, Rosso Veneno (red) body colour and 2 bucket seats made in forged composite, woven carbon-fibre carbonSkin interior upholstery. The Veneno Roadster has a top speed of 356 km/h (221 mph) and goes from 0–100 km/h (0–62 mph) in 2.9 seconds. 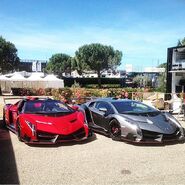 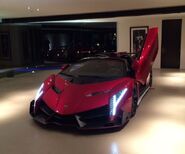 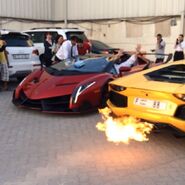 Retrieved from "https://automobile.fandom.com/wiki/Lamborghini_Veneno?oldid=111112"
Community content is available under CC-BY-SA unless otherwise noted.