Chrysler Navajo
The Lamborghini Portofino was a concept car developed for Lamborghini by Kevin Verduyn, one of Chrysler's chief designers. Introduced at the 1987 Frankfurt Auto Show, it was a fully functional, four-door, four-seat sport sedan.

In 1986, Kevin Verduyn designed a concept car model for Chrysler called the Navajo. The concept never went beyond the clay model stage, but when Chrysler acquired Lamborghini in 1987, the design was resurrected and with some fairly minor tweaks, turned into the Portofino.

The Portofino was built by Coggiola on a Jalpa chassis. It also made use of the Jalpa's 3.5 L V8 engine and 5 speed transmission. The most interesting feature of the Portofino though was the doors, which opened scissor-style like the Countach, only the back doors were rear-hinged, suicide-style. The logo on the hood featured the Lamborghini bull inside the Chrysler pentagon.

Only the single prototype Portofino was ever produced. In 1991, it was heavily damaged in an accident in transit. However, Chrysler had it restored by Metalcrafters in Costa Mesa, CA, and it is now on display at DaimlerChrysler headquarters in Auburn Hills, Michigan.[1]

The Portofino was notable for being an early example of cab forward styling, and many aspects of its design made it into the Chrysler Concorde (which was extremely similar to the Dodge Intrepid and Eagle Vision). 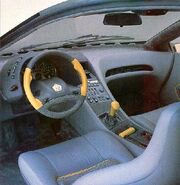 This article about an automobile produced after 1975 is a stub. You can help Autopedia by expanding it.
Community content is available under CC-BY-SA unless otherwise noted.
Advertisement