Lamborghini Jarama is a sports coupé which was built by Lamborghini between 1970 and 1976. It was designed by Bertone designer Marcello Gandini.

Jarama is an area renowned both for bullfighting and for its motor racing circuit. Ferruccio Lamborghini originally intended for the name to recall the fighting bulls that were bred in the area.

In 1970, Lamborghini had to redesign the Islero to meet new United States safety and emissions regulations. The new car was built on a shortened version of the same platform as the Espada. Two different models were made, the original GT (1970-1973) model having 350 bhp V12, and the GTS (1973-1976) with its output upped to 365 bhp. Also, with the GTS there were a few minor body modifications and power assisted steering, removable roof panels, and an automatic transmission became available as options. A total of 327 Jaramas were built.

A one-off, race modified Jarama called the Jarama Rally was built by Lamborghini test driver Bob Wallace. It featured many improvements to the original car, including a modified V12 engine producing 380 hp and a near-50/50 weight distribution, compared to the original's 53/47. It could allegedly reach a top speed of 270 km/h (167.7 mph). In the end it never participated in any races, and it was reportedly restored in the UK in 1990.

Ferruccio Lamborghini's personal Jarama GTS is on display at the official Lamborghini museum. 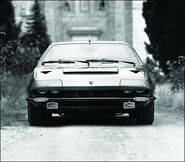 The top view of a Lamborghini Jarama.

The interior of a Lamborghini Jarama.

The V12 engine of a Lamborghini Jarama.