The Lamborghini Espada is a grand tourer which was built by Italian car manufacturer Lamborghini between 1968 and 1978.

As is the case with most of Lamborghini's cars the Espada's name is also tied in to bulls and bullfighting. It means "sword" in Spanish, the weapon of the matador.

Based on the Marzal show car, displayed at the 1967 Geneva Auto Show, and the Bertone Pirana, a radically rebodied Jaguar E-type. It was to fill the spot of a true four seat car in Lamborghini's lineup, which already included the 400GT and Miura. 1217 cars were made, making it the most successful Lamborghini model at the time.

The car was designed by Giorgetto Giugiaro of Italdesign, shortly before he designed the Volkswagen Passat in 1971.

The Espada was originally fitted with a 4L 325bhp V12 engine, fully independent suspension and four wheel disc brakes. Most transmissions were manual, and the Espada also introduced one of the first automatic transmissions able to absorb the torque of a large sporting V-12. It had unusual gearing, with 3 ratios: drive, 1 and reverse.

During its 10 year production the car underwent some changes, and three different models were produced. These were the S1 (1968-1970), the S2 (1970-1972) and the S3 (1972-1978). Each model featured engine power improvements, but only minor details were changed with the exterior design. The interior was altered dramatically between each model. An all new dashboard and steering wheel was installed for the S2, and the interior was again revamped for the S3. In 1970, power assisted steering was offered as an option, and in 1974 an automatic transmission was also offered. In 1976 impact bumpers had to be installed to meet United States safety requirements, and some people consider cars produced with them to be the S4, but Lamborghini did not officially change the designation. Near the end of the Espada's life, Bertone designed a four door prototype named Lamborghini Faena, which was never put into production.

In 1999, a new version of the Espada was rumored to be in the works, but it was right at the time Lamborghini wanted to concentrate on a Diablo successor, so little became of the idea aside from a few drawings.[1]

The very luxurious dashboard of an Espada

The front-mounted engine bay of an Espada 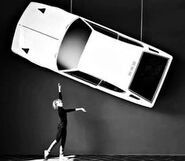