Autopedia
Register
Don't have an account?
Sign In
Advertisement
in: Articles with unsourced statements, Lamborghini vehicles, Sports cars,
and 15 more

The Lamborghini Countach was a supercar produced by Lamborghini in Italy. The first prototype emerged in 1971, and production lasted until 1990. It did not pioneer but did popularise the wedge-shaped, sharply angled look popular in many high performance cars since. It did make popular the "cabin-forward" design concept that pushes the passenger compartment forward in order to accommodate a larger engine. This was the second of many V12 models produced over the years.

The word Template:Audio (pronounced Template:IPA) is an exclamation of astonishment in the local Piedmontese language - generally used by men on seeing an extremely beautiful woman [1]. The closest translation into English would be "far out!" (archaic) or "Holy Shit!"(indecent). The name stuck when Nuccio Bertone first saw "Project 112" in his studio. The prototype was introduced to the world at the 1971 Geneva Motor Show. All previous Lamborghini names were associated with toros (Ferruccio Lamborghini contrary to a popular belief, has never supported bullfighting, but he was born under the sign of Taurus and hence named his first cars after famous bulls or bulls' breed).

The styling was by Marcello Gandini of the Bertone design studio, the same designer and studio that had styled the Miura. Gandini was then a young, inexperienced designer—not very experienced in the practical, ergonomic aspects of automobile design, but at the same time unhindered by them. He produced a quite striking design. The Countach shape was wide and low (42.1 inches), but not very long. Its angular and wedge-shaped body was made almost entirely of flat, trapezoidal panels. There were curves, notably the smoothly coke-bottle wing line, but the overall appearance was sharp.

The doors, a Countach trademark, were of a 'scissors' fashion—hinged at the front with horizontal hinges, so that the doors lifted up and tilted forwards. This was partly for style, but just as much because the width of the car made conventional doors impossible to use in an even slightly confined space. Care needed to be taken, though, in opening the doors with a low roof overhead.

Aerodynamics, however, were quite poor for such a sleek-looking car&mdash, apparently, to Lamborghini, looking fast was more important than going fast,.[citation needed]||}}

The pure style of the prototype was progressively enhanced or cluttered (depending on one's point of view) by the evolution of the car to improve its performance, handling, tractability, and ability to meet mandated requirements. This began with the first production model, which included several vents which were found to be necessary to cool the engine adequately. These included the iconic NACA duct on the door and rear fender of each side of the car. Later additions, including fender flares, spoilers, carburator covers, and bumpers, progressively changed the aesthetic values of the car.

The Countach's styling and visual impression caused it to become an icon of great design to almost everyone except automotive engineers. The superior performance characteristics of later Lamborghini models (such as the Diablo, or the Murciélago) appealed to performance car drivers and engineers, but they never had the originality or outrageousness that gave the Countach its distinction. The different impressions left by the various Lamborghini models have generated numerous debates and disagreements over what constitutes 'classic' or 'great' automotive design (elegant looks and style, vs. technical and engineering superiority).

The rear wheels were driven by the traditional Lamborghini V12 engine mounted longitudinally in a version of mid-engined configuration. For better weight distribution, the engine is actually 'backwards'; the output shaft is at the front, and the gearbox is in front of the engine, the driveshaft running back through the engine's sump to a differential at the rear. Although originally planned as a 5 liter powerplant, the first production cars used the Lamborghini Miura's 4 liter engine. Later advances increased the displacement to 5 liters and then (in the "Quattrovalvole" model) 5.2 L with four valves per cylinder. All Lamborghini Countaches were equipped with six Weber carburetors until the arrival of the 5000QV model, at which time the car became available in America, and used Bosch K-Jetronic fuel injection. The European models, however, continued to use the carburetors until the arrival of the Lamborghini Diablo, which replaced the legendary Countach.

The Countach used a skin of aircraft-grade aluminum over a tubular space frame, as in a racing car. This is expensive to build but is immensely strong and very light (in spite of its size, the car weighs approximately 1500kg (3,300 lb)). The underbody tray was fiberglass. 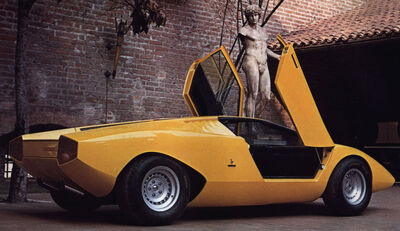 A single prototype was built, the LP500 (the 500 standing for the 5 L displacement of the engine which was intended to be used). Painted bright sunflower yellow, the car was a stunner at the Geneva Motor Show in 1971. Sporting Gandini's original design concepts, the car's design needed extensive modification for production. In particular, the small air intake ducts on the car's rear shoulders proved insufficient to cool the engine, and large 'air box' scoops were added in that position. Large NACA ducts were added on the sides to give additional air. The experimental car was also constructed of aluminum honeycomb sheeting among other things, which was dropped for production.

The car no longer survives; it was sacrificed in a crash test to gain European type approval, even though its construction method was utterly unlike production vehicles. 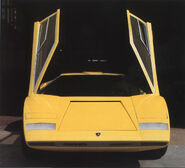 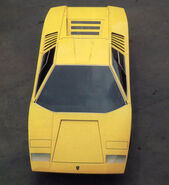 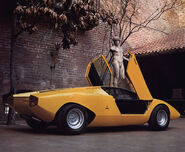 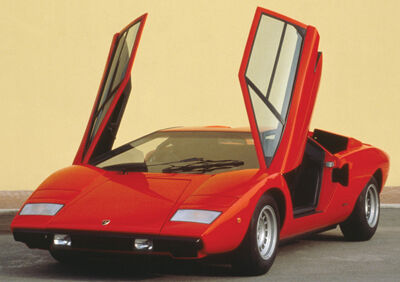 The first 4 liter production Countach was delivered to a customer in 1974. Externally, little had altered from the final form of the prototype except at the rear, where conventional lights replaced the futuristic light clusters of the prototype. The styling had become rather more aggressive than Gandini's original conception, with the required large air scoops and vents to keep the car from overheating, but the overall shape was still very sleek. The original LP400 rode on the quite narrow tires of the time, but their narrowness and the slick styling meant that this version had the lowest drag coefficient of any Countach model and possibly the highest top speed. Many people like the looks of this clean, fresh original model the most of all the Countach variants, and indeed it is simple, with smooth lines and few decorations. Even the emblems at the rear simply read "lamborghini" and "Countach", with no engine displacement or valve arrangement clutter as is found on more modern cars. 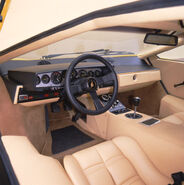 In 1978 a new LP400S model was introduced. Though the engine was slightly upgraded from the LP400 model, the most radical changes were in the exterior, where the tires were replaced with much wider Pirelli P7 units, and fiberglass wheel arch extensions were added, giving the car the fundamental look it kept until the end of its production run. An optional V-shaped spoiler was available over the rear deck, which, while improving high-speed stability, reduced the top speed by at least 10 MPH. Most owners ordered the wing. Dynamically, the LP400S was a better car, the wider tires making it more stable in cornering. Aesthetically, some prefer the slick lines of the original while others prefer the more aggressive lines of the later vehicles, beginning with the LP400S. The standard emblems ("lamborghini" and "Countach") were kept at the rear, but an angular "S" emblem was added after the "Countach" on the right side.

1982 saw another improvement, this time giving a bigger, more powerful 5 liter engine, which improved performance to be more in line with Lamborghini's somewhat exaggerated claims. The bodywork was unaltered. This version of the car is sometimes called the LP5000S, which may cause confusion with the later 5000QV (next section). 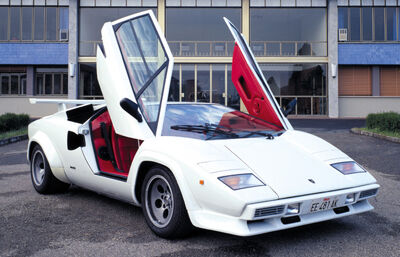 In 1985 the engine was improved again, bored and stroked to 5.2 liters and given four valves per cylinder (quattrovalvole in Italian). The carburetors were moved from the sides to the top of the engine for better breathing - unfortunately this created a hump on the engine deck, reducing the already poor rear visibility to almost nothing. Some body panels were also replaced by Kevlar. In later versions of the engine, the carburetors were replaced with fuel-injection.

For the first time, a US specification model was produced by the factory, with styling changes to allow bumpers to meet US federal standards (large, bulky bumpers were used that, to many people, ruined the smooth lines of the car). Although this change was the most notable on the exterior, the most prominent change under the hood was the use of Bosch K-Jetronic fuel injection, rather than the six Weber carburetors used in the Euro-spec model. 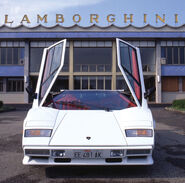 Named to honor the company's 25 year anniversary in 1988, the 25th Anniversary Countach was mechanically very similar to the 5000QV but sported much changed styling. The rear 'air boxes' were restyled and enlarged, while the vents behind them were changed so that they ran front to back instead of side to side. In addition, a new air dam and side skirting, both with air intakes, were fitted, and the taillights were restyled to be narrower, with body-colored panels replacing the upper and lower parts of the previous large taillights. The styling changes were unpopular with many, particularly since the intakes had strakes in them that appeared to mimic those on the Ferrari Testarossa, but they improved the engine's cooling, a problem the Countach had always struggled with. The Anniversary was produced through 1990 when it was replaced by the Lamborghini Diablo. 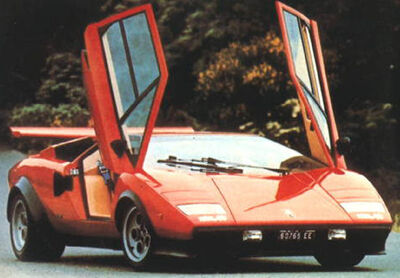 In 1975, Walter Wolf, a wealthy Canadian businessman and owner of the famous Wolf F1 Racing team in the 1970s, purchased an LP400; however, he was not satisfied with the LP400's engine and asked Dallara, the chief engineer of Lamborghini at that time and the founder of the Italian F1 racing team Scuderia Italia in the early 1990s, to create a special high-power version of Countach. It was the "code NO 1120148" Walter Wolf special with the original "5" engine from the Countach prototype which produced 447 hp / 7900 rpm and reached a supposed maximum speed of 315 km/h (195.7 mph). This model also featured the upgraded wheels, Pirelli P7 tires, large fender flares, and front and rear spoilers of the LP400S model. It was painted in red, with black fender flares, and was designated "LP500S" like the standard Countach model from the 1980s, and was the stepping stone that led to this later production model. This first Walter Wolf car is currently located in Japan. Two other Wolf Countaches were produced, one painted blue, NO 1120202 (currently in Germany) and one navy blue, NO 1121210. (This machine was owned by Mr. Wolf for a long time, but was eventually sold.)

A total of 2,042 cars were built during the Countach's sixteen year lifetime:

Substantially more than half were built in the final five years of production, as Lamborghini's new corporate owners increased production.