The Centenario was initially unveiled on March 1, 2016 during the Geneva Motor Show.

2016 is the year Lamborghini founder Ferruccio Lamborghini would have turned 100. Consequently, Lamborghini named it the Centenario, an adjective meaning Centenary, relating to a period of 100 years.

Lamborghini will produce a limited number of 40 cars that has been split equally between the coupes and roadster versions.

The Centenario LP770-4 is roughly based on the Aventador, although is still slightly longer than even the 750HP Super Veloce (SV) edition. The huge air scoops on the front bonnet are a functional aid for downforce onto the front axle. The headlights, side skirts and wheels arches also get air ducts, which provide air flow to the rear radiators. The entire body is made of lightweight carbon fibre, and it also has a monocoque chassis. The side skirts, front splitter, wheel arches and rear diffuser are all functional and coloured in matte carbon. All of this is still 1,520 kg - 55 kilograms lighter than the Aventador. 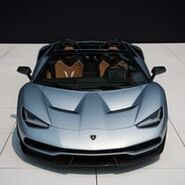 Retrieved from "https://automobile.fandom.com/wiki/Lamborghini_Centenario?oldid=108852"
Community content is available under CC-BY-SA unless otherwise noted.