Autopedia
Register
Don't have an account?
Sign In
Advertisement
in: Lamborghini vehicles, Coupes, All wheel drive vehicles,
and 22 more

The Lamborghini Aventador is the replacement of the legendary Lamborghini Murcielago. It is coded LB834 and LB835 for the roadster version. For Lamborghini, design is always the beauty of aggressive power, the elegance of breathtaking dynamics. From the very first glance, the new Aventador is unmistakably a Lamborghini, clothed in the brand's characteristic and distinctive design language - with its extremely powerful proportions, its exact lines and precise surfaces, and with taut muscularity in every one of its details. The designers in the Centro Stile Lamborghini have carefully developed this design language to give the Lamborghini Aventador a significant new edge. It is an avantgarde work of art, an incredibly dynamic sculpture, from the sharply honed front end through the extremely low roofline to the distinctive rear diffuser. Every line has a clear function, every form is dictated by its need for speed, yet the overall look is nothing less than spectacular and breathtaking. For the further development of the Lamborghini design language, designers pulled their inspiration from another sphere dominated by speed and dynamics - from modern aeronautics, from the world's fastest and most agile aircraft. This gave rise to a design of maximum functionality and spectacular sharpness, an extremely precise and highly technical design language with a new kind of vitality. Powerfully defined lines and taut surfaces create a fascinating interplay of light and shade, endowing the car with tremendous visual movement. The limited edition Reventón - a work of automotive art - and the Sesto Elemento 'technology demonstrator' were forerunners of this philosophy: the Aventador is the first Lamborghini series production car embodying this vision.

The Aventador, of course, also follows the mid-engine concept, with the vehicle weight concentrated around the vertical axis to reduce inertia and optimize dynamics. With the legendary Countach, Lamborghini was a pioneer of mid-engine construction, its revolutionary concept bringing racing technology to the road. The design of the Lamborghini Aventador adds visual emphasis to the mid-engine layout, with a look that concentrates its power on the rear axle.This was the fifth of the V12 Lamborghini models produced over the years

The LP700 is the first Aventador that was made.It was launched at the 2011 Geneva Motor Show on the 1st of March. It features a brand new 6.5 litre V12 engine, producing 691 hp (515 kW). It was designed by Filippo Perini of Lamborghini Centro Stile under the direction of Lamborghini chief of design Manfred Fitzgerald. 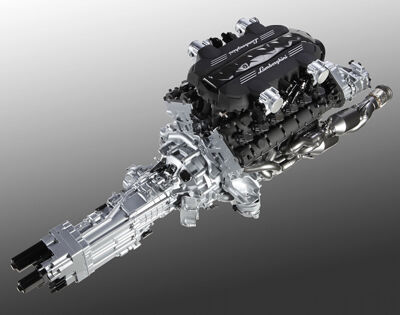 This kind of extreme power must be delivered reliably to the road. The driver of the Lamborghini Aventador LP700-4 can depend fully on its permanent all-wheel drive - indicated by the 4 in the model designation. In the driveline, an electronically controlled Haldex coupling distributes the forces between front and rear. In a matter of milliseconds, this coupling adapts the force distribution to match the dynamic situation. A self-blocking rear differential together with a front differential electronically controlled by ESP make for even more dynamic handling. The Drive Select Mode System enables the driver to choose vehicle characteristics (engine, transmission, differential, steering and dynamic control) from three settings - Strada (road), Sport and Corsa (track) - to suit his individual preferences.

The Aventador is avalable in multiple colors including:

The design of the Aventador incorporates the design some previous Lamborghini models such as the Murcielago,Gallardo (Both the original and the LP560-4),Reventon,Countach,Estoque Concept,Diablo,abnd the Sesto Elemento Concept.The etymology of the name comes from Lamborghini's traditional fascination with the world of bullfighting. In this case, the Aventador was named for a Spanish fighting bull, that bore the number 32 singed on his hide, from the breeding stables of the sons of Don Celestino Cuadri Vides. Aventador gained fame in 1993 in the town of Zaragoza, Spain after a notably spirited, bloody and violent battle with a torero that earned it the “Trofeo de la Peña La Madroñera" for its courage.The Aventador is considered as the most charismatic Lamborghini ever made by some reviewers.

Just like previous Lamborghini flagship models, Aventador features their signature scissor doors, but in this case they feature a new hinge system which opens the doors upward and outside, allowing not only a pre-windowed and frame-free style door, but also letting the driver have more room for getting in an out, and also gives the possibility of opening in case of rollover.

The Aventador's spacious interior combines the fine exclusivity of premium materials and perfect Italian craftsmanship with state-of-the-art technology and generous equipment. The red switch cover on the broad center tunnel encloses the start button used to awaken the twelve-cylinder. The interior is dominated by a next-generation dashboard - as in a modern airplane, the instruments are presented on a TFT-LCD screen using innovative display concepts. A second screen is dedicated to the standard-fit multimedia and navigation system.

At the time, it is too early to state resale values.

Autocar UK described the Aventador as being Outrageous.They also say that the steering wheel is light yet precise.

Lamborghini Aventador LP 750-4 Superveloce was announced in March 2015 at the Geneva Motor Show. It features an upgraded powertrain, with maximum horsepower increased to 559 kW (750 bhp) from the standard coupé's 522 kW (700 bhp). Combined with weight reduction of 50 kg (110 lb) from increased usage of carbon fiber both inside and outside the car the LP 750-4 SV has a power to weight ratio of 1 hp to 2 kg. The car also features increased aerodynamics, with downforce increased by 180% as compared to the standard Aventador coupé. Notable aerodynamic upgrades are a revised front splitter and rear diffuser, and a rear wing. The car is available in 34 base colours. The car's driving dynamics have also been upgraded, featuring new enhanced electronic steering for superior maneuverability at high speeds, magnetic pushrod suspension for superior handling, and chassis improvements to increase rigidity. Overall the LP 750-4 SV's standing 0–100 km/h (0–62 mph) time is decreased from 2.9 seconds to 2.8 seconds, with the theoretical top speed still "somewhere in excess" of 350 km/h (217 mph). Delivery of the car began in the second quarter of 2015.  Road & Track recorded a 0–241 km/h (0–150 mph) time of 12.8 seconds, a 0–322 km/h (0–200 mph) time of 33.5 seconds, and a 0-402m (¼-mile) trap speed of 227.4 km/h (141.3 mph) in the March 2016 0–322 km/h (0–200 mph) shootout. 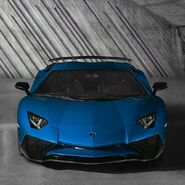 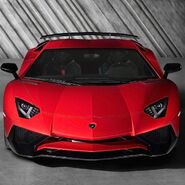 Lamborghini Aventador LP 750-4 SuperVeloce Roadster was unveiled at the 2015 Pebble Beach Concours d'Elegance. It features a compact two-piece carbon fiber hard top that can be stowed in the trunk like the previous roadster. Numerous weight-saving measures have lowered the Roadster’s weight to 1,575 kg (3,472 lb), a figure that makes it 50 kg (110 lb) lighter than the regular. In the US it is expected to be priced from US$530,075 excluding tax. Deliveries began in the first quarter of 2016.

The Aventador J is a one-off. It is a convertible edition of the LP700 which has no windscreen.

The Aventador Roadster is the removable roof version of the LP700.

The Lamborghini Aventador LP 700-4 Pirelli Edition was announced in December 2014. Celebrating a 50-year association between Lamborghini and Pirelli, it features a design and colour scheme that echoes the Pirelli tyre, with a thin red stripe running across the roof.

The Aventador Miura Homage is a special edition aventador that honors the Lamborghini Miura: only 50 will be made. The car was unveiled in the 2016 Goodwood festable of speed.

The nose was redesigned with a bigger front splitter and two new air ducts in the front bumper. At the rear it has a new black rear diffuser with fins, and three single exit exhausts tips. It has 130 percent more front downforce than the standard Aventador.

The roadster variant of the new Aventador S followed up in 2017 at the Frankfurt International Motor Show, the roadster is mechanically identical to the coupé with the only difference being a different engine cover (identical to the standard Aventador roadster), two carbon fibre removable roof panels (weighing less than 6 kg (13 lb) stowable in the front compartment of the car and new optional wheels. The roadster is 50 kg (110 lb) heavier than the coupé due to chassis reinforcing components due to which it accelerates from 0–60 mph (0–97 km/h) 0.3 seconds slower than the coupé. The UK base price of the Aventador S roadster is £251,462.

A prototype of the variant had previously made a new production car lap around the Nurbürgring Nordscheleife in July 2018, beating the previous record holder, the Porsche 911 GT2 RS by setting a lap time of 6:44.97 with Lamborghini test driver Marco Mapelli behind the wheel achieved by using the Pirelli Trofeo R tyres available with the car as an option.[42]

The Aventador SVJ is the first production V12 Lamborghini model to feature Lamborghini's Aerodynamica Lamborghini Attiva (ALA) system. This allows the car to achieve 40% more downforce than the Aventador SV and 1% reduction in the coefficient of drag. The system adds aerodynamic components to the car including a disconnected front splitter, tri-dimensional air outlet on the bonnet, a large carbon fibre rear wing with a central fin, underbody aero design with vortex generators, and a large rear diffuser. The system works in conjunction with Lamborghini Dinamica Veicolo Attiva 2.0 (LDVA 2.0) management system, which uses inertial sensors to control the car's aero in 500 milliseconds.

The Aventador SVJ "63 Edition", a special edition commemorating the company's year of foundation (1963), featuring a special while livery but there will be no colours to choose from as it will be painted matt black and white with bronze inserts with the number 63 more prominent on the car as it would be first offered for sale, limited to just 63 units while the whole production run of the Aventador SVJ would be limited to just 900 units in total with deliveries starting in the beginning of 2019.[43]

Avalable in Italy, America, Australia and the UK.

The 6.5L V12 engine of the Lamborghini Adventador

No awards have been issued.