The Lamborghini 400GT 2+2 was a 2+2-seated sports car from the Italian manufacturer Lamborghini, successor to the 350GT. It was first presented at the 1966 Geneva Auto Show.

Compared to its predecessor, the engine was enlarged to 3,929 ccm (240 c.i.), increasing the power to 320 bhp. The 400GT 2+2 was actually a different body from the 350GT, with a longer wheelbase, different roofline, and some sheetmetal changes throughout the car. The larger body shape enabled the +2 seating to be installed in the rear, where the 350GT only had room for luggage or +1 seating. The bodywork was designed by Carrozzeria Touring. The 400GT 2+2 also had a Lamborghini designed gearbox, with Porsche style synchromesh on all gears including, which greatly improved the drivetrain.

There was a variant of the 350GT with the 4L V12 fitted to it, which was called the 400GT. Only 23 of these smaller coupes were built, three of which had desirable aluminum bodywork.

A one-off edition called Lamborghini 400GT Monza appeared in the Barcelona Motor Show in 1967. The original customer allegedly never received the vehicle, instead ending in the hands of a rich Spaniard. He kept the car in his family until discovered by Bonhams, who, after 9 years of negotiations, finally sold the car in an auction for 177.500 GBP. 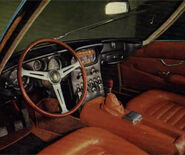 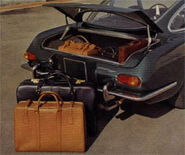 This article about a car produced between 1945 and 1975 is a stub. You can help Autopedia by expanding it.

Retrieved from "https://automobile.fandom.com/wiki/Lamborghini_400GT?oldid=108410"
Community content is available under CC-BY-SA unless otherwise noted.