The Kia Sportage, pronounced Spor'tij in the United States and Spor'tahj in French-speaking countries (including Canada) is Kia's compact SUV. Originally, it was a mini SUV, but the second generation Sportage is a compact crossover SUV.

The 2007 Sportage comes in three trims: the LX, LX V6, and the EX V6. The base LX is powered by a 2.0L 140hp I-4 engine, and the two V6 trims, as their names indicate, are powered by the same 2.7L 173hp V6 engine. Also, while the LX comes standard with a 5-speed manual transmission w/OD, the two V6 trims are equipped with a 4-speed Sportmatic automatic transmission. All trims are available in either automatic full-time four wheel drive or the standard front wheel drive. For a list of safety options, see the Safety section below. Other standout features on the Sportage include:

Adds to or replaces LX features with:

Adds to or replaces LX V6 features with:

Consumer Reports states that the "reliability of the Sportage is above average of late."

In safety tests carried out by the NHTSA, the Sportage returned relatively impressive results. Although no tests for rollover were not performed, all front- and side-impact crash tests earned the Sportage 5-Star ratings. Some of the standard safety equipment found on the Sportage includes:

All colors are available to all trims of the Sportage, and a complete list is viewable at CarsDirect.com. Some of the possible combinations include:

There are currently no hybrid models of the Sportage in production. 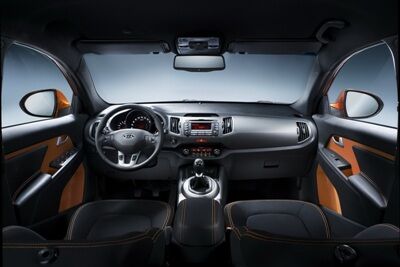 According to Kelley Blue Book, "despite one of the industry's best warranties, a Kia will not offer the return on investment in the form of resale value enjoyed by Honda or Toyota owners."

After a 2-year hiatus, the 2005 Sportage shares its Elantra-based platform with the 2005 Hyundai Tucson. The Sportage will also have a 2.0 L Diesel engine available in the United States. Pricing is expected to start at just over US$17,000. Critics and fans of the original, pre-Hyundai Sportage complain that it is considerably larger than the original Sportage and has none of the earlier offroad capability, the two keys for its success.

The first generation Sportage was a mini SUV or "toy" sport utility vehicle (SUV), based on the Mazda Bongo platform.

Sportage was sold in either a four-door, two-door hardtop, and a two-door soft-top. The first-generation Sportage was discontinued in 2002, in favor (for the United States market) of the Sorento. The four-door model comes in just a quarter of one inch longer and the same width as the Geo Tracker, but boasts 145 hp (108 kW) and optional four wheel drive.

After the 1997 Hyundai takeover of Kia, the vehicle was produced with major defects including an axle that broke loose at high speeds, rattling exhaust heat shields, weak and often defective alternators and various other annoyances.

Did the 2013 Kia Forte leaked in these images?

2012 Kia Optima was launched in Europe

Kia Ray will be launched on the Korean market only

Kia Slovak plant will raise production by 10 percent this year

This page uses content from Wikipedia; see Kia Sportage, which includes these contributors.