Autopedia
Register
Don't have an account?
Sign In
Advertisement
in: Article stubs, Pages with the First Anniversary Infobox Upgrade, Kia vehicles,
and 5 more

The Kia Soul is a subcompact crossover SUV manufactured and marketed worldwide by Kia,[1] currently in its third generation.

Designed at Kia's design center in California, the Soul debuted at the 2008 Paris Motor Show and is manufactured in South Korea. Since 2014, Kia has marketed an electric variant as the Soul EV. 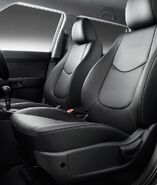 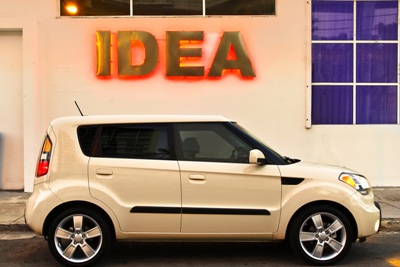 The vehicle was first showcased at the Chicago Auto Show in February 2014[4] where Kia said the Soul EV will be offered in California, Oregon, New York, New Jersey, and Maryland. Kia is targeting regions with the largest EV markets and infrastructure, and plans to offer the Soul EV in other markets in the near future.[5] 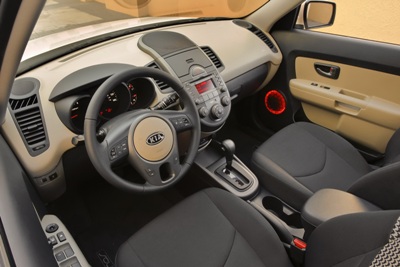 On November 21, 2018, Kia Motors released teaser pictures of the new Soul. In addition, it was confirmed that the Soul will be offered with a 2.0 L I4 or a 1.6 L turbo-four engine. A rugged X-Line trim will also be added to the Soul's trim options.[6] According to Kia, this version of the Soul will have two options for four-cylinder engines. There is a turbocharged 1.6 liter engine and a naturally aspirated 2.0 liter engine.[7] It will be both a gasoline model and an electric vehicle, with a "toughened chassis" for accidents.[8] Unlike earlier models, it has thin lights as headlights, with the large grille remaining.[9]

Kia Motors unveiled the third generation Soul and Soul EV (e-Soul in some markets, codenamed SK3) at the 2018 LA Auto Show. The 2020 Soul and Soul EV are slated for release in North America in the second quarter of 2019.[10] In the US, Kia postponed the launch of the Soul EV to 2021. The Kia Soul now shares a platform with the Hyundai Kona.[11]

The Soul EV is the only version of this generation sold in Europe.[12] It is now called e-Soul in most European markets, except for the UK.[13] Distinguished with the name "Soul Booster,"[14] the 2020 Kia Soul shares a 64-kWh battery pack and powertrain with the Niro. [15]

In 2021, Kia discontinued the Soul in South Korea, due to poor sales and Seltos competition.

The 6-speed manual was discontinued in the United States for the 2022 model year, it was only offered on the base LX model.

Unveiled at the 2013 New York[16] and Frankfurt auto shows,[17] the second generation Soul is based on Kia's Track'ster concept, [citation needed] and offers an increase in torsional rigidity of 28.7%, wheelbase increased to 2,570 mm (101.2 in), width increased to 1,800 mm (70.9 in) and the same overall height of 1,600 mm (63.0 in). The redesign features a wraparound greenhouse, high-mounted tail lights, large trapezoidal lower air intake and "floating" body color panel set into the liftgate.

For model year 2017, Kia Soul underwent a small facelift. Included in the changes are some minor body trim changes, new paint colors, and new headlight options.[19] The biggest change comes at the top trim level, in which the old 2.0-liter Nu engine is replaced by the 1.6-liter turbo gasoline engine, which adds 40 hp (30 kW) and 45 lb⋅ft (61 N⋅m) of torque over the outgoing model.[20] The engine is mated to a 7-speed Dual-clutch transmission, replacing the 6-speed automatic. The powertrain change resulted in the car being one of the fastest in its class.[21]

The Soul concept was styled by Mike Torpey in early 2005. As a new member of Kia's Design Team in Irvine, California, Torpey was sent to Kia Korea to brainstorm a new vehicle. After seeing a television documentary on wild boars and learning of their importance in Korean culture, Torpey sketched a caricature of a boar wearing a backpack. The New York Times reported "the boar's attitude of strength and capability was the image [Torpey] wanted for a new model aimed at hip urban youths."[22]

The Soul bares inspiration from a cancelled Volkswagen SUV proposal based on the Volkswagen Fox platform designed under the supervision of Peter Schreyer, who would become Kia's chief designer in 2006 and incorporate the design into the Soul.[23][24]

According to the Automotive News, the Soul had been criticized for a "plasticky" interior and a harsh ride.[25] Both the ride quality and interior were upgraded during the first year of production.

The interior features two front bucket seats and a rear flat-folding bench seat that can adjust to prioritize passenger or cargo volume.[26]

The North American version of the Soul was initially available in 2010 and 2011 with one of two inline four-cylinder gasoline engines. The base model is powered by a 1.6-liter unit producing 122 bhp (91 kW) and mated exclusively with a five-speed manual transmission.[17] Higher trims feature a 2.0-liter unit producing 142 bhp (106 kW) connected to a standard five-speed manual transmission with a four-speed automatic available as a stand-alone option.[30] A 1.6-liter diesel engine producing 126 bhp (94 kW) and 260 N⋅m (192 lb⋅ft) torque is offered in European models instead of the 2.0-liter gas, mated to a five-speed manual gearbox.

For the 2012 model, the Soul received two new transmissions and a new engine: 6-speed manual and 6-speed automatic transmissions replaced the old choices, and the new 2.0-liter Nu engine replacing the old Beta engine; the 1.6-liter Gamma engine remained as the base model choice. The Gamma 1.6 gets a new dual variable valve timing (128 HP), and in some countries, gets a direct injection fuel system.[31]