The Kia Carnival is a minivan produced by Kia. It is known in the UK, South Africa, Guatemala and North America as the Kia Sedona and in South Korea as the Kia Carnival R. It had a base price starting at around US$20,000, which was lower than most competing minivans, but now the Mazda Mazda5 (Mazda Phemacy in Japan) has a lower price than most competing minivans. It is available in the United States with a 3.5 L DOHC V6 engine producing 195 hp SAE (145 kW), and many other countries with a 2.9 L DOHC turbodiesel, with 144 PS (142 hp SAE/106 kW). A 2.5 L V6 is available in some markets. A 5-speed manual transmission is standard for the smaller engines, with a 4-speed automatic transmission available as an optional. A 5-speed automatic is the only transmission in the American market. 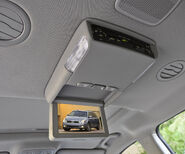 a pimped out Sedona

The 2007 Sedona is available in either an LX or EX trim. The EX includes several upgrades from the LX model and incorporates a number of standard features not found on the LX. Both operate on the same 3.8L 250hp V6 engine and 5-speed Steptronic transmission.The Sedona also offers a timing chain that never needs replacement rather than a timing belt. and both come with the same set of standard safety features. Some of the standout options for each model include:

Sedona EX Adds to or replaces LX features with:

Today's actual prices for the Kia Sedona can be found at CarsDirect.

The Sedona received excellent ratings from the NHTSA, scoring 5-Star ratings for all front- and side-impact crash tests and a 4-Star rating for rollover. Some of the standard safety features found on the Sedona include:

A full list of colors is viewable at CarsDirect.com. Some of the available combinations are:

There are currently no hybrid models of the Sedona.

Of the cars surveyed by the RACV, the Kia Carnival is the cheapest people-mover to run on a weekly basis.

The Carnival is Australia's most popular people mover.

According to Kelley Blue Book, "while Kia's 10-year/100,000-mile limited warranty also works in the Sedona's favor, predicted resale values that fall well short of the category's best can neutralize the up-front savings versus the Honda Odyssey, Toyota Sienna and the bigger Nissan Quest."

Of the criticisms of the first generation Carnival, some owners have complained about the engine's lack of power and the Carnival's big turning circle. 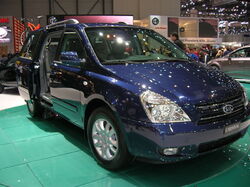 In autumn 2005 for the 2006 model year, Kia introduced a redesigned Sedona offering features such as a 60/40 fold flat seat, power sliding doors and liftgate, second row power windows, backup sensors, and a navigation system (in Korean models). The new Sedona has a 3.8 L V6 making 250 hp (182 kW). Although its predecessor was often criticized for its 4800 lb (2177 kg) weight, which was far greater than its competitors, the new Kia van is more than 400 lb (180 kg) lighter.

The new Sedona went on sale in Australia in January 2006 as the Grand Carnival. It continues to be sold alongside the old model. The new model features a 3.8 L V6 engine, standard seating for 8, and a 5-speed automatic with manual shift mode. It is priced almost 25% higher than the existing Carnival, which continues with a 2.5 L V6. Sedona now boasts more room for seven and added cargo capacity. 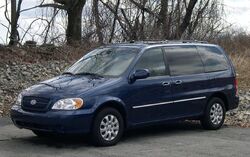 The Kia Sedona was a new model from Kia to compete with the minivan segment of Toyota Sienna, Honda Odyssey, and the Chrysler minivans. It had a 3.5 L V6 engine making 195 hp (145 kW). It was mated to a 5-speed automatic transmission. The Sedona lacked features that other minivans had such as power sliding doors and liftgate, a fold flat third row seat navigation system, rear-view camera, and backup sensors. The Sedona also had subpar fuel economy, rated at 15 mpg city and 20 mpg highway, the lowest of any front wheel drive minivan.

The Sedona/Carnival is rebadged and sold as the Naza Ria in Malaysia. Because of the high negative value attributed to the Kia brand, rebadging becomes a highly value-added activity, and qualifies the car for National Car incentives if done within Malaysia.

The Carnival is produced for the Chinese market by the Dongfeng Yueda Kia Automobile Company, a joint venture with Kia.

In the British Isles (and possibly other regions), the Sedona was also sold as an MPV/van hybrid- it had the same doors, but only one row of passenger seats - the rest of the car behind these was sectioned off for van-like use, and there were no side windows behind the rear passenger doors. They are outsold by the UK Ford Galaxy and Honda Stream. Kia Sedona's are disliked by many people because of its ugly image and top speed of 104 MPH. It is unlike the Ford Galaxy and Honda Stream because they can both reach a speed up to 140 MPH and they are much more reliable.

The Carnival name is sold in Australia since 1999.

Retrieved from "https://automobile.fandom.com/wiki/Kia_Sedona?oldid=94645"
Community content is available under CC-BY-SA unless otherwise noted.