Autopedia
Register
Don't have an account?
Sign In
Advertisement
in: Pages with the First Anniversary Infobox Upgrade, Kia vehicles, Kia,
and 2 more

The Kia Borrego (Mohave in Korea) is a mid to full size SUV which will go on sale in North America in late spring 2008 as a 2009 model. It is Kia's first venture into the large SUV market and utilises their first V8 engine. It rivals cars such as the Land Rover Discovery and Hyundai Terracan.

The Borrego will come in both 3.8-litre V6 and 4.6-litre V8 DOHC forms, with a clean diesel confirmed to be on it's way at the end of the year, the latter of which is capable of a 7,500 pound max payload, while the former resides with the 5,000 pound max payload of the Kia Sorento. 18 inch alloys are optional, and the car comes in 2WD and 4WD versions.

Pricing has not been fully confirmed yet, but expect two trim levels, most likely LX and EX, and pricing will range from a base price of $26,535 to a fully specced V8 at $35,535.

The basic car will come with a 3.8-litre V6 engine and a 5-speed automatic gearbox, and the range-topping version will have a 4.6-litre V8 and a 6-speed automatic. Expect a 'clean diesel' V6 to be added to the lineup in about a year or so.

The Borrego features a wide array of safety equipment, including: 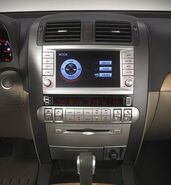 Colour information is currently not available, but expect it to echo other Kia SUV's.

There are currently no plans for a hybrid model, although it is plausible. A 'clean diesel' variant will arrive in late 2008. Kia has confirmed to be working on a Fuel Cell variant dubbed the Borrego FCEV. [1]

The Borrego is the first Kia to ever feature a V8 engine, and also the most powerful Kia ever.

Some articles claim the introduction of a V8 with oil supplies so expensive is unwise, and Motor Trend go on to say "When Kia began developing the Borrego some four years ago, gas was under $2 per gallon and automakers were still touting the sustainability of the big truck boom."

The Borrego is currently only to be sold in the North American and Korean markets, although for the latter it will be rebadged 'Mohave'. However, a move into other markets such as the UK is possible when the new diesel arrives.