The Jeep Patriot (MK74) is a compact crossover SUV introduced in early 2007 for the 2007 model year by the Jeep marque of Chrysler. It debuted publicly in April 2006 at the New York Auto Show and slots between the Compass and Liberty in the Jeep lineup. Market-wise, it is the least-expensive SUV in North America and one of the cheapest SUV-standard crossovers up to date.

The Compass and Patriot are both based on the DaimlerChrysler/Mitsubishi GS platform. These vehicles are differentiated by their styling and marketing: The Patriot is a traditionally styled 4-door Jeep wagon, while the Compass shares a more in-town hatchback look, similar in terms to the Dodge Caliber.

In a press conference on November 4, 2009, Chrysler LLC, now 20% under Fiat ownership, announced that both the Patriot and Compass would get modifications for 2010, but will be discontinued by 2012, to be replaced by a single Fiat-based model.[3] See Autopedias' comprehensive Jeep Patriot Review.

The Patriot and Compass are both based on the DaimlerChrysler/GS platform. These vehicles are differentiated by their styling and marketing: The Patriot is a traditional four-door Jeep wagon, similar to the Cherokee, which was discontinued in the U.S. in 2001, while the Jeep Compass is intended as a sporty crossover, but with more capacity to handle rough roads and poor weather than competitors like the Pontiac Vibe. The Dodge Caliber, also based on the GS platform, is a more direct competitor to the Pontiac Vibe and Toyota Matrix, and is more like a small hatchback than either of the Jeeps. The Patriot is manufactured at DaimlerChrysler's Belvidere, Illinois assembly plant alongside the Dodge Caliber and Compass.

The Patriot uses a four-cylinder 2.0L or 2.4 L GEMA gasoline I4 engine [2] In the US The base car features front-wheel drive, but a choice of two electronically-controlled four-wheel drive systems is optional. One, the Freedom Drive I, is a full-time system for on-road use. Freedom Drive II is made for off-road use with variable torque between speeds of 25 mph (40 km/h) and 65 mph (105 km/h) for optimal handling. The 2.0 L GEMA I4 is an option for the 4X2 model Patriot.

For Europe and Australia a 2.0 L (1968 cc; 120 cid; 140ps) Volkswagen-manufactured diesel engine is fitted along with a 6-speed manual gearbox. All EU cars are fitted as standard with four wheel drive and a version of the Freedom Drive System which tuned differently from the USA versions but with similar capability to FDII with brake traction control and three switchable electronic stability control and traction control settings for on or off-road use.

The Freedom Drive II-equipped Patriot uses a continuously variable transmission with a low range instead of a traditional two-speed transfer case, but has Jeep's "Trail Rated" badging, signifying that it "has been designed to perform in five categories of off-road conditions: traction, ground clearance, maneuverability, articulation, and water fording." The Freedom Drive II Patriot is among the most offroad-capable vehicles in its class, thanks in part to the presence of the off-road Brake Traction Control which is also available in Freedom Drive I options. This allows the vehicle to maintain forward motion if one or two wheels lose traction by selectively applying brakes to the spinning wheels. This is a major improvement over a conventional AWD system; a vehicle intended for onroad use with open differentials only would be stranded if there is a loss of traction in one front and one rear wheel at the same time.

At the 2009 North American International Auto Show in Detroit, the Jeep Patriot was added to Chrysler's ENVI lineup. As with the previously announced Jeep Wrangler EV, the Jeep Patriot EV is an extended-range electric vehicle (EREV, also called a plug-in hybrid vehicle), capable of traveling 40 miles (64 km) solely on battery power and up to 400 miles (640 km) on a single tank of gas.[4]

However, Chrysler's new owner Fiat SpA disbanded the ENVI division in November 2009, and removed the three ENVI models from its 5-year plan for Chrysler.[5] There have been no announced plans to continue with the electric version.

The Patriot receives minor upgrades for 2011. Outside, the Patriot sports minor styling tweaks while the interior receives upgrades as well. Three trims will be offered in the US: Sport, Latitude, and Latitude X.

In the EU four trims will be offered Sport, Sport Plus and Limited as well as an Overland version. Also for the EU market the 2.0L Volkswagen PD Diesel Engine has been replaced by a 2.2L Mecredes Benz Twin Cam Common Rail Diesel Engine delivering 163PS. This change was necessary as the Volkswagen PD engine did not meet the Euro V environmental standards which was mandatory for all new cars registered after September 2010.

Available in 4 trims, the patriot is also available in both 2x4 and 4x4

Available in 3 trims, this vehicle is based on the same platform than the Dodge Caliber and Jeep Compass

Russian car manufacturer UAZ also has a utility vehicle named "Patriot", so Jeep Patriot is sold in Russia as Jeep Liberty (not to be confused with the North American Jeep Liberty).

The Diesel is designated a Patriot 2.0 CRD implying that the engine is a common rail diesel engine, like all the other CRD Jeeps. However the VW engine used 2007-2010 is not a common rail engine but a type of Unit Injector engine termed Pumpe Duse or PD by VW. 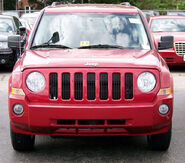 
Cite error: <ref> tags exist, but no <references/> tag was found
Retrieved from "https://automobile.fandom.com/wiki/Jeep_Patriot?oldid=51221"
Community content is available under CC-BY-SA unless otherwise noted.