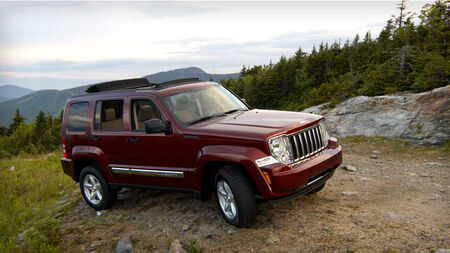 The Jeep Liberty is a compact SUV from DaimlerChrysler's Jeep brand. The Liberty was introduced in 2002 with styling inspired by the Dakar and Jeepster show cars. It competes with the Toyota RAV4, Ford Escape, Chevrolet Equinox and Nissan Xterra. The Liberty was the first Jeep to use two new PowerTech engines: A 150 hp 2.4 L I4 and a 210 hp 3.7 L V6. Despite popular belief, the Liberty was not the first Jeep vehicle to use an independent suspension; the Jeep Wagoneer first used it in the 1960s.

The Liberty has been very successful for Jeep, outselling the Ford Escape in 2005 to become the best-selling compact SUV in the United States. 70 percent of Liberty buyers are new to the Jeep marque, and the Toledo North Assembly factory in Toledo, Ohio is running overtime to produce the model. 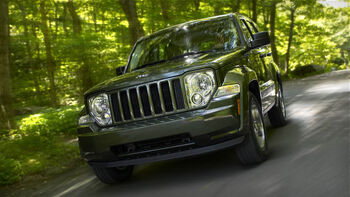 The 2008 Liberty comes available in two trims: the Sport and the Limited. Both operate on the same 3.7L 210hp V6 engine, and while the Sport is available in a 6-speed manual transmission as well as a 4-speed auto, the Limited is only availble in auto. Though the Limited does include some options and cosmetic touches not found on the Sport, most of the standard features remain the same. Some of these include:

The 2008 Jeep Liberty has yet to be tested by the NHTSA but here are the results for the 2007 model. It is assumed that the 2008 results will be similar, if not better.

According to the NHTSA, the 2007 Liberty performed well overall in safety tests. For driver front-impact and all side-impact crash tests, the Liberty received a 5-Star rating, while passenger front-impact tests earned it a 4-Star rating. However, rollover tests performed on the 2WD and 4WD versions both yielded only 3-Star ratings.

Some of the standard safety equipment that can be found on all versions of the Jeep Liberty include:

A full list of colors for the 2007 Jeep Liberty is viewable at CarsDirect.com. Some of the available combinations include:

There are no hybrid models of the Liberty.

According to Kelley Blue Book, "the Liberty is projected to retain an average residual value over 24-, 36-, 48- and 60-month periods. The Liberty Limited holds its value better than the Nissan Xterra, Kia Sorento and Suzuki XL-7, but falls behind the Toyota RAV4 and Honda CR-V."

The Jeep Liberty received a complete redesign for the 2008 model year with a more boxy and off-road look, like that of the 2007 Dodge Nitro. The 2008 Liberty debuted at the 2007 New York International Auto Show.[2]

With the smaller Patriot and Compass crossover SUVs now available to cater to MPG-conscious buyers, the four-cylinder engine was dropped from the Liberty's offerings. The iron-block, aluminum-head V6 was the only engine available for 2008. Towing capacity was Template:Convert/lb. Jeep discontinued the Liberty CRD for the American market because it couldn't meet tougher 2007 emissions standards for diesel engines. Transmission choices were both carry-overs: a six-speed manual or a four-speed automatic. Standard equipment included electronic stability control with roll mitigation, traction control, and anti-lock brakes with brake assist. New Features included standard side airbags. Optional features are rain-sensing wipers, Sirius Satellite Radio, Bluetooth, a navigation system, and the MyGig entertainment system, complete with a 30GB hard drive.

Two models were offered at rollout: Sport and Limited. Wheel choices were 16-, 17- and 18 in. Among the more distinctive features was the Sky Slider, a power roof made from “reinforced acrylic cloth” that opens over the front and rear seats. The Sky Slider opens up to 60 in by 30 in, which was the largest opening in its class. Jeep claimed that the idea behind the Sky Slider was to give consumers the open-air feeling from previous Jeep models while maintaining the rigidity and safety of a sturdy frame.[3]

The 2009 Liberty was relatively unchanged from the 2008 models with the exception of stiffer rear axle shafts and retuned springs, shocks, anti-roll bars, steering gear valve, low rollback brake calipers and a revised brake pedal ratio. The six-speed manual transmission was dropped, and the four-speed automatic was now standard.[4]

Inspired by styling from the Dakar[8] and Jeepster[9] concept cars, the Liberty was intended as a replacement for the discontinued Jeep Cherokee (XJ). Three trim levels were initially offered; the top end Limited, a more rugged looking Renegade and the base Sport. All were made available with either 2WD or 4WD. In 2007, the Renegade trim level was replaced with the Latitude that appeared to focus more on an urban appearance.

The Liberty was the first Jeep to use two new PowerTech engines; the 150 hp 2.4 L straight-4, dropped in 2006, and the 210 hp 3.7 L V6. The VM Motori 2.8 L straight-4 common rail turbodiesel, became available in CRD branded 2005–2006 Sport and Limited models (2004 in the UK). The diesel utilized a variable geometry turbocharger and generated 160 hp and 295 lb-ft of torque. The heavier diesel powerplant added nearly 200 lb to the CRD's curb weight versus the gasoline model. DaimlerChrysler introduced the CRD to gauge the marketability of diesel engines in North America; diesels are already common in Europe. The Liberty was also the first Jeep vehicle to use rack and pinion steering.[10]

Only available in 2005 and 2006 for the Sport and Limited models, the 2.8L VM Motori CRD has since been discontinued due to stricter 2007 United States diesel emission standards. Maine, Vermont, Massachusetts, New York, and California had already banned sale of the vehicle due to their rigid state emissions regulations. The 50-state legal 3.0L Mercedes-Benz OM642 engine was used in the Jeep Grand Cherokee from 2005-2008.

The Liberty was not the first Jeep vehicle to use an independent front suspension, as the Jeep Wagoneer first used it in the 1963 model. However, that independent front suspension was limited to four wheel drive versions and, even then, was a short lived option.[11] Jeep exceeded their expectations by selling 10,000 Liberty CRD models in its first calendar year of production. In addition, the Liberty was nominated for the North American Truck of the Year award for 2002.

The Liberty is available with either a part time Command-Trac or full time Selec-Trac transfer case.

The Command-Trac transfer case has four positions: 2-HI, 4-HI, Neutral, and 4-LO. The lever is placed in 2WD HI for regular driving. This allows the two rear tires to receive power. The second position, 4WD HI, is used for driving on slippery or loose surfaces. This position locks both the front and rear drive shafts together splitting engine power equally between all four tires. The third position, Neutral, disengages both drive shafts from the transfer case allowing the car to roll freely; this is used for towing behind another vehicle, for example. The last position, 4WD LO is used for situations when higher torque is needed. A common misconception is that 4WD LO provides more traction. It only changes the gear ratio and does not add any more friction between the tires and the driving surface. This position, like 4WD HI locks both the front and rear drive shafts together, and by using a lower gear ratio, allows for 2.72 times more torque (however, the speed is limited to around 25 MPH max). It should be noted that using 4WD HI or LO on dry pavement is hazardous to vehicle components, through driveline binding and wheel-hop.

The Selec-Trac transfer case has five positions: 2-HI, 4-HI Part-Time, 4-HI Full-Time, Neutral, and 4-LO. The transfer case is different from the Command-Trac transfer only in the extra 4WD HI Full-Time position. The 4WD HI Full-Time position adds the same traction benefits that the part-time 4WD setting offers, but features an open differential between the front and rear axles to allow the two axles to spin at independent speeds and eliminate drive line binding and wheel-hop. The down side of 4WD Hi Full-Time is that, due to the open differential between front and rear drive lines, at times the drive train will only deliver power to the front or the rear e.g. when the front of the vehicle has reached a high traction surface such as dry pavement and the rear is in sand, the rear tires will spin with 100% of engine power, the front receiving no traction. Under equal traction conditions (front-rear) this position gives the rear wheels 52% of the engine's power and the front wheels 48% of the engine's power. The division of power and open center differential allows the Selec-Trac transfer case to be operated at all times in an "All Wheel Drive" mode with no adverse effects.

In European markets, the Liberty is sold as the Cherokee, and is available in Sport and Limited models. For the 2007 model year, the Renegade was dropped, itself a development of the Extreme Sport which was a limited-run model in 2004. For the 2008 model year, the V6 petrol engine was dropped from the European range - only the 2.8 CRD remaining, either in manual or automatic transmission guises. The range itself apes the USA range, with the same colour options available, and the same options lists. The Cherokee was updated alongside the Liberty in 2005.

The Cherokee is Jeep's most popular European model, but is something of a forgotten entity - the car has a cult following in off-roading circles, and is the darling of those who wish to buck the trend. The Cherokee is not to all European tastes - it is incredibly thirsty, and certainly not as refined as key rivals. Also, the Cherokee has the shortest service intervals of any vehicle in its class.

Prices of the car vary across Europe, but in the UK the prices are as follows:

The EuroNCAP have crash tested the Cherokee, and the results are four out of five stars. This rating breaks down into:

The addition of a belt reminder for the 2003 MY gained the Cherokee enough points to warrant a four-star rating, but the poor pedestrian protection resulted in one out of four stars for the category. Since the car was tested in 2002, child protection was not tested, but each Cherokee sold comes with chassis anchorage points on the rear seats.

This page uses content from Wikipedia; see Jeep Liberty, which includes these contributors.

Retrieved from "https://automobile.fandom.com/wiki/Jeep_Liberty?oldid=89919"
Community content is available under CC-BY-SA unless otherwise noted.