The Jeep Compass is a compact crossover SUV to be introduced for the 2007 model year. Jeep made its public debut of the Compass at the 2006 North American International Auto Show in January. The Jeep Compass, along with the Patriot will take over from the Jeep Liberty as Jeep's entry-level SUVs, and will be one of Jeep's first crossover SUVs. The Compass will have a base price of $15,985 in the United States market. The first Compass was produced on May 30, 2006.

The Compass and Patriot are both based on the DaimlerChrysler/Mitsubishi GS platform. These vehicles will be differentiated by their styling and marketing: The Patriot is a traditional 4-door Jeep wagon, while the Compass is intended as a sporty "hot hatch" crossover like the Toyota Matrix. The Dodge Caliber, also based on the GS platform, is a combination of these two segments.

Four years prior to the introduction of the production Jeep Compass, a concept vehicle with the same name had its world premiere in Detroit at the 2002 North American International Auto Show. It featured a two door body, all-wheel drive and a 3.7-liter V6 engine. [1]

Jeep made its public debut of the production Compass at the 2006 North American International Auto Show in January. The first Compass was assembled on May 30, 2006, in Belvidere, Illinois, where the Dodge Neon was produced.

In a press conference on November 4, 2009 Chrysler LLC, now 25% under Fiat ownership, announced that both the Patriot and Compass would get modifications for 2010, but will be discontinued by 2012, to be replaced by a single Fiat-based model.[2]

For 2011, Jeep redesigned the Compass to more closely resemble the Grand Cherokee, while keeping its own identity. The 2011 Jeep Compass also receives a revised suspension for better handling, a revised interior with more standard equipment, and more option packages including a Freedom Drive II Off-Road Package which includes a continuously-variable transmission fitted with a low-range setting, all-terrain tires inside 17-inch aluminum wheels, skid plates, a four-wheel-drive system, and an increase ground clearance of a full inch. [3]

The car also features an electronically-controlled all wheel drive system with variable torque between speeds of 25 mph (40 km/h) and 65 mph (105 km/h) for optimal handling. However, the base model version has only Front wheel drive (FWD), a first for any Jeep.[11] The Trail Rated version of the Compass has passed the same testing of off-road ability as other Jeep vehicles in terms of traction, ground clearance, maneuverability, articulation, and water fording. Although Chrysler has released a high-performance 2008 SRT4 version of the Dodge Caliber, there is no SRT Group (Street and Racing Technology) edition of the Compass.

As with most Jeeps, the Compass comes in two trims: Sport and Limited.

For a full list of features, check out the Official Jeep Site 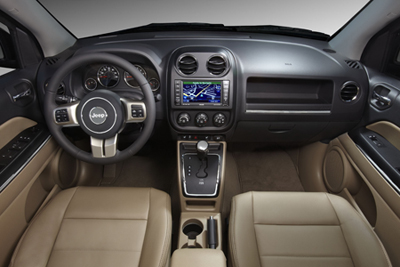 The Jeep Commander offers a wide array of colors:

Main competitors include the Honda Element and Nissan Rogue.

In Australia, the Jeep Compass is the most equipped small SUV than all of its rivals with features such as alloy wheels, cruise control and side curtain airbags as standard. It also comes with a turbo diesel option whereas many of its rivals remain available only in petrol versions except for the Nissan X-Trail.

The Jeep Compass is the only jeep that can't be classified as "Trail Rated" no mather witch option are taken. Unlike it's Patriot brother, the vehicule is made exclusively for on road use. This make Jeep fans classify it as "not a real Jeep".

The Jeep Compass uses a 172 hp (128 kW) 2.4 L GEMA I4 gasoline engine and will also get a 2.0 litre Volkswagen-designed diesel engine for the European and Australian markets. The 2.0 litre GEMA engine is available on the 4X2 Sport model. The 2.0 diesel from Volkswagen is the same as used in the Volkswagen Passat. The car also features an electronically-controlled all wheel drive system with variable torque between speeds of 25 mph (40 km/h) and 65 mph (105 km/h) for optimal handling. However, the base model version has only FWD, a first for any Jeep. The Compass will be the first Jeep offered in many years that isn't badged as "Trail Rated". This indicates that the Compass has not passed the same testing of off-road ability as other Jeep vehicles in terms of traction, ground clearance, maneuverability, articulation, and water fording. Even though Chrysler has released a high-performance 2008 SRT4 version of the Dodge Caliber, as of the 2008 model year, there is little chance that a SRT Group (Street and Racing Technology)edition of the Compass will be released.

The Compass is assembled in Belvidere, Illinois, where the Dodge Neon was produced.

As of March 2008, the Compass was the second-worst selling Jeep model, trailed only by the Jeep Commander.


Cite error: <ref> tags exist, but no <references/> tag was found
Retrieved from "https://automobile.fandom.com/wiki/Jeep_Compass?oldid=103358"
Community content is available under CC-BY-SA unless otherwise noted.