The Sonata is a mid-size sedan built by Hyundai Motor Corporation. Production started in 1988, with redesigns for the 1998, 2002, and 2006 model years. The original Sonata was part of Hyundai's expansion in North America after the success of the Excel and replaced the Stellar Model. The exterior was originally designed by Giorgetto Giugiaro of ItalDesign. Currently the Sonata is assembled at a new plant in Montgomery Alabama. Its primary market is young families.

All Sonata models are equipped with air conditioning, compact disc player, power locks and power windows as standard equipment. There are many aftermarket options such as mud flaps & upgraded wheels available for the Sonata through Hyundai's vast dealer network.

The Sonata includes a 10-year/100,000-mile limited powertrain warranty and 5-yr/60,000-mi basic coverage. Consumer Reports gave the new Sonata a rating of well above average. It was one of the most trouble-free cars on CR's list in the 2008 auto issue. 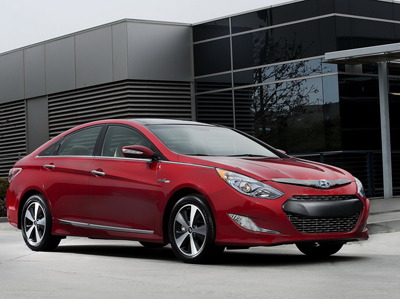 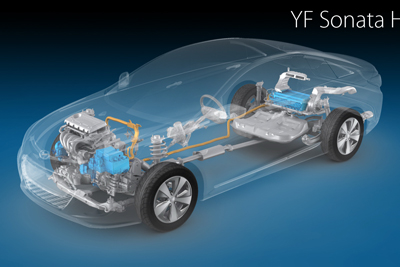 Beginning MY 2011, the Sonata lineup is joined by an Atkinson Cycle hybrid model. Powered by a parallel hybrid drive system comprising of Hyundai's 2.4 litre Theta II Inline-4 and a 30kW (151 lb-ft) electric motor hooked up to a 270V lithium polymer battery, the drivetrain produces a combined output of 209 horsepower @ 6,000 rpm, and 195 lb-ft of torque while delivering 40-mpg on the highway and 35 mpg in the city, with a 37 mpg combined rating from the EPA. Power is sent to the front wheels via a 6-speed automatic transmission.[6]

The Sonata has a unique hood contour. While controverisal in some design cirlces, the concave sweeping lines give the illusion of a lower front suspension stance and therefore a more aggressive look.

The Sonata is priced competitvely in its category of midsize sedan and has fairly good resale values. This makes this model not only smart purchase initially but for used buyers as well.[7]

The Sonata has been criticized by some to have a significant amount of suspension noise which detracts from the overall refinement of the newly designed model.

The U.S. launch of the all-new Sonata kicked off with the historical opening of the first U.S. assembly plant for the Korea-based Hyundai Motor Company in May 2005. The plant is located in Montgomery, Alabama, and produces all V6 and 4-cylinder Sonatas. Hyundai claims the car will launch to 62 mph (100 km/h) in 6.6 sec, and have a top speed of 147 mph.

Sonata.jpg
Add a photo to this gallery

2009 Hyundai Sonata GLS (US)The redesigned vehicle was unveiled at the 2008 Chicago Auto Show as a 2009 model year vehicle.The production version was sold as the Hyundai Sonata Transform in Korea, and the model debuted elsewhere as an 'early' 2009 model.

Redesigned gauges feature a blue backlight, and a touch-screen navigation system, optional on the 'Limited' trim level only, includes satellite radio capability.Bluetooth capability is available as an optional unit, separate from the audio or navigation system, and all models include both a USB port along with an auxiliary input jack. An optional USB adaptor cord allows integration of an iPod, and chrome interior door handles are standard on the Limited trim.

In Singapore, a 2.2L CRDi turbo-diesel powered version is used as for taxis.

In 2002 the Sonata was refreshed with new front and rear bumpers, more standard content and more trims to choose from. Pricing remained extremely competitive even with the added standard features. In Europe, the range was reduced to 2.0 GSi and 2.7 V6 models: the 2.4-litre engine, sold in South Korea, North America and Canada, was not available there.

A new model arrived in 1998 (1999 for North America), launching the (EF) series. The styling was slightly less aggressive, and modelled more on a Hyundai show car earlier that year. This redesign kept the German influences, but bore an unintentional resemblance to the Ford Taurus as well.

This Sonata also lent its platform to the first-generation Hyundai Santa Fe.

It underwent a minor facelift in 1993 and was released as a 1994 model. It featured a more modern shape, reminiscent of the Honda Accord and especially the Mazda 626. The base engine in most markets was a 2.0 L 126 hp (94 kW) Sirius I4, but there was a 3.0 L, 142 hp Mitsubishi V6 option in some markets. This generation continued after the demise of the Bromont, Quebec plant in 1994. After that, all Sonatas would be built in Korea, until the opening of the Montgomery, Alabama plant in 2005.

A relatively adventurous facelift for the Sonata (Y3) in 1995 saw the exterior style begin to look more upmarket, with Jaguar and Mercedes-Benz styling cues in the headlight area. The rear end also began to look more upmarket—only the central section was retained. The four-cylinder engine was up to 137 hp (102 kW) that year as well.

The Sonata was meant to be a replacement for the short lived Stellar and before the Stellar, Hyundai was building Ford Cortinas under license.

In Europe, the Sonata was marketed as a rival for the BMW 5-Series, Audi A6, Toyota Camry and Nissan Maxima. European versions were launched in late 1994 as a 1995 model: engines available were 2.0-litre 4-cylinder and 2.5 V6. Base-level models were badged GSi, top-specification models as V6.

In Australia, the Sonata was marketed as a luxury car, as with Europe. It had 2.4-litre 4-cylinder and 3.0 V6 engines. These were available from 1996 onwards.

In China, the Sonata is known as the Hyundai Ling Xiang or Sonata NFC. In 2009, Hyundai Beijing gave the Sonata a facelift in response to dismal sales because of lackluster looks.[9]

In their long-term test review[10] of the 2006 model, Edmunds noted: "Many of our staffers took issue with the odd placement of the audio and A/C controls on the center stack. They are in opposite positions with the stereo placed too high and the air vents too low. We never got used to this arrangement and we hope Hyundai swaps them in its next redesign." An alternative view, however, might conclude that this unique design is an innovation by clearly segregating audio controls from HVAC controls, and that the placement of the air vents doesn't in fact inhibit flow of air.

Retrieved from "https://automobile.fandom.com/wiki/Hyundai_Sonata?oldid=94052"
Community content is available under CC-BY-SA unless otherwise noted.